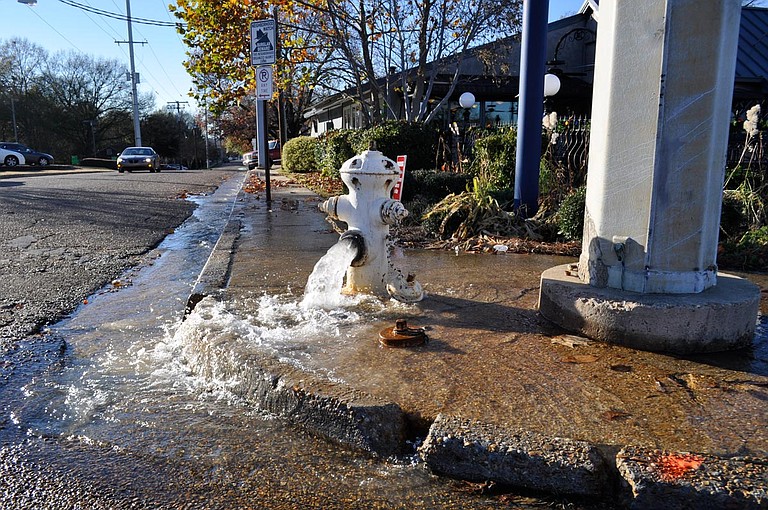 The Jackson Department of Public Works has identified over 100 sewer failures throughout the city. It will cost the City of Jackson around $5 million to fix half of them. Photo by Trip Burns.

The City of Jackson needs to allocate as much as $5 million to fix 50 sewer failures throughout Jackson, although more money may be necessary to fix them all. The Jackson City Council will vote on the additional funding, but it is unclear when.

The Department of Public Works has so far identified a total of approximately 110 sewer failures. City officials will present an update on the situation during the next council meeting, scheduled for Nov. 26.

Miller added that excessive rainfall—October saw the heaviest rainfall in Jackson's history—exacerbated the problem. The sewer collapses have resulted in sewage overflows in the Pearl River, surrounding creeks and residential areas. Many Jackson residents have complained of the overflows, which not only emit unpleasant odors and are rife with hazardous disease-carrying pathogens, but also compromise water quality. The integrity of buildings is also jeopardized if they stand in or near an overflow site.

The sewage overflows are one of the many problems associated with a botched $90-million contract with Siemens, Inc. to upgrade Jackson's water-sewer infrastructure, install new meters and implement a new water-billing system. After the contract was signed in 2013, residents started receiving faulty bills or no bills for months or years. Because the City was unable to collect payments from tens of thousands of customers, it has been unable to fund critical repairs to Jackson's water-sewer infrastructure. The City filed a lawsuit against Siemens in June stating that Jackson has suffered more than $225 in losses since the signing of the deal.

In order to fund the emergency repairs, the City needs to modify its 2020 fiscal-year budget, which it adopted less than two months ago.

"None of this is a shock," Council President Virgi Lindsay said after Miller's remarks. "Plus, we're all getting phone calls, and it is a terrible thing when you have a sewer overflow. So the question is, how do we pay for this? Where does the $5 million come from?"

Mayor Chokwe A. Lumumba said the City was assessing its options. "The reality is that there are no more magic pots of money that we have," he said, but the City must balance its fiscal responsibility with responsibility to residents of Jackson. "We have to be able to accomplish both. We have no choice."

One possibility is to reinvest the $7 million in loans that the City took out last month to stabilize the water metering and billing system, the mayor said. On Oct. 1, the council voted to approve a $7-million loan to repair the city's water-sewer system.

"We're looking to potentially invest in contracting out some of those metering services and taking the workforce that is already in the metering department and placing them in the ... water-system department that is fixing the sewage issue," the mayor said.

Miller also suggested moving approximately $500,000 from the labor budget toward the contractual services part of the budget. "We are trying to maintain budget discipline while at the same time striking a balance with the urgency of responding to the sewer failures, with the importance of maintaining our staff's long-term viability," Miller said.

Ward 1 Councilman Ashby Foote expressed concerns that $5 million would not be enough. "It would be great if we had this $5 million, but I don't think we can fix all of this with $5 million. I think we need to pay a lot more than $5 million," he said to Miller.

Foote also cited recent complaints from residents who live near creeks that had experienced overflows. He noted that manhole covers continue to bubble up with raw sewage for weeks, even after the water levels in the creeks had gone down.

Miller responded by stating that while the City aims to repair the cause of the overflows, it is also unable to respond to issues such as what Foote described in a timely manner. Ideally, the City would deploy a team to address these residual overflows within hours, but it currently does not have the resources to do so.

"The challenge we have is that our response time has decayed from hours to days to weeks. And that ... creates a situation in people's yards and in front of their businesses that no one wants to have to deal with," Miller said.

Lumumba urged those in attendance to consider the sewer repairs within the larger context of the flawed Siemens contract.

"We need to make a connection between the fact that our water billing and metering department is suffering," he said, adding that the City's inability to accurately bill customers and collect bill payments has resulted in a malfunctioning enterprise fund. "The fact that we don't have a functioning enterprise system—this is one of the results, this is another damage that ... has resulted from the Siemens deal."