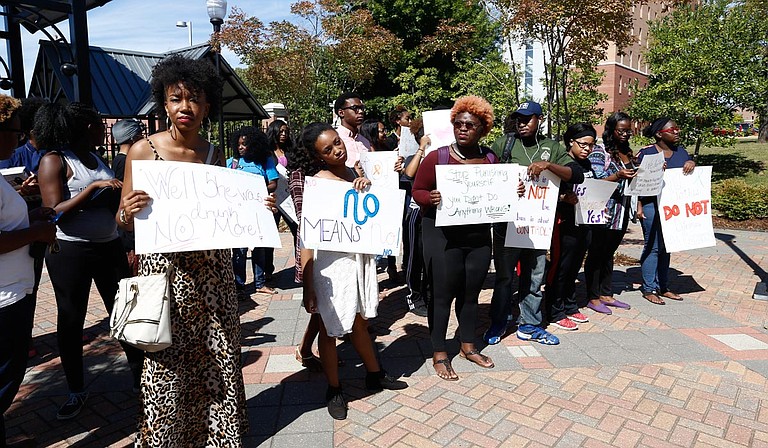 Increasingly, women in Mississippi are speaking up about what we need here. Photo by Imani Khayyam

Election season was tough for Mississippi women as usual. It was a time for broken promises and slights as we watched male candidates, and their women enablers, show little apparent interest in our safety, prosperity, health and voices, and still be elected to all statewide offices. We also watched the other party fall on its face, with no Democrats elected to statewide office. This was after ordering us to help them win even if they've voted against our rights, saying it would benefit us later.

Many women are speaking out rather loudly in response, because if not now, the same rigor mortis will set in fast. I wrote a column the day after the election that, largely, called the state's white-male-led Democratic Party out (as I've done before) for pandering for the same conservative white voters who usually vote, rather than doing more to engage women, young people and Mississippians of color, including through more diverse party leadership, respectful dialogue and deep listening.

Then women started sending me columns. I ran one by a Democratic Party insider, and another by the Democratic attorney general nominee, Jennifer Riley Collins, who laid bare how both Republicans and Democrats treated her. We posted another this week from a white woman who volunteers for the party. These are vital voices in a sexist state where women are historically smeared, belittled and condescended to when we speak out, especially about politics.

Just look at all the white men doing the rounds of colleges this month to expound about the election. It just doesn't occur to many people controlling the microphones to ask women what they think about it all.

This newspaper, which is mostly women-run, has always published the voices of women on serious issues. And apparently, even many Democratic men hate that about us. That is very telling.

On Sunday, as I was editing Riley Collins' column, I was tagged in a tweet saying that some Dems were having a "whole ass breakdown because we told them Tuesday was going to happen in 2018 and they responded with arrogance, anger, and condescension. We don't wanna hear that sh*t because you mad at @DonnerKay."

Imagine if those folks directed that energy to calling out misogyny and racism, or even blogs that viciously rip apart women, black Mississippians and immigrants. They could condemn publications that openly and unethically sell "endorsements" to candidates—instead of supporting hate rants and grift with ad dollars. They could direct their outrage to do something useful, not kvetching about feedback.

Besides, it is condescending to the women I publish to insist that I am putting ideas into their pretty little heads. It is a silencing tool to pretend I'm the wicked-witch instigator who pushes them to criticize leaders' words and methods. Women send me columns, and give me story tips, and keep me apprised about what happens within organizations and parties precisely because they know I care about what they think and provide a forum for their voices.

I and other women don't put ourselves out there because we crave a barrage of personal insults. We do it so Mississippi will grow and start keeping more of its smart residents here. We must model speaking up for younger women, or many of them will hightail it out of here to escape the pervasive sexism. Who can blame them?

Seeing that tweet, my partner, Todd Stauffer, used a word that I often use for men who wig out at any criticism: fragility. It's simply absurd to blame a woman editor for providing a forum for women to share both their frustration and potential solutions, especially now. We're frustrated, Mississippi is still on the bottom, and the Republican supermajority is laughing at the rest of us.

In fact, a GOP friend told me that his party is fully aware that Dems could assemble a killer coalition in Mississippi, especially, with our demographics, if they would find the courage to expand its tent.

Well, this is the moment. The old ways of fixating on white voters; hiring party and campaign leadership who love to yell at people; and treating opposition research, nasty TV ads and political trickery as the holy grail are abject failures. A conservative is still going to vote for a conservative.

Instead, we need engagement, deep listening, collaboration, enthusiasm, passion, creativity and inspiration, even more than money. Anybody who doesn't want to lead with inspiration and hope should step aside from politics. They are the problem.

Donna Ladd writes that Angie Thomas is leaving Mississippi—and calls for Mississippi Dems to truly invite all voices to the table going forward.

It is also an exciting time, though, as mostly Trump Republicans take full ownership of what happens in the state. That creates a window for serious change, and not just in a partisan way. I personally know Republicans who are fed up with the turn their own party has taken, and I sure know Democrats—especially women, people of color and young residents—who are disillusioned by the usual donkey dance.

Starting today, we must scout for potential new leaders as one woman after another speaks up about what needs to happen in Mississippi (and expect many more because this election opened the floodgates).

When you see someone lodging personal attacks, or blaming the messenger, you are not looking at a leader. Leaders develop thick skins, take criticism, and don't respond to taunts and heckling designed to derail us. Leaders learn something from every flare-up or experience. Leaders take it all in, listen deeply, think, plan, build coalitions. As Riley Collins wrote, "true leaders lead from the front, not in backrooms."

Mississippi must embrace leaders who show they are listening to the long-overdue feedback, the ones who don't take it personally, the ones making the effort to listen deeply. These are people who will reach out to the women and others speaking out to say, "Let's talk. I'm interested in your ideas. Teach me. What are the solutions?"

Who will lead real change in Mississippi? Who should? Who can inspire?

Remember: Without asking these tough questions and seeking real answers, the roads leaving Mississippi will get even more crowded in years to come. But we can choose a new path right now, if we will.