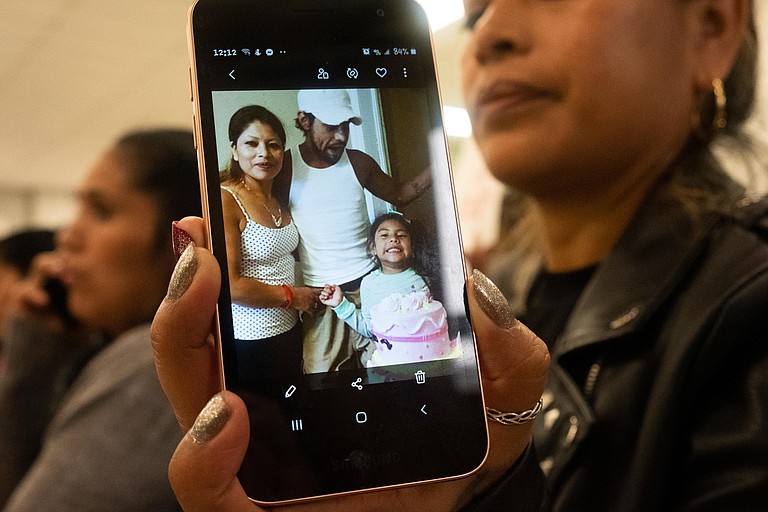 Hilda (last name withheld) shares a photograph of herself with her husband, Antonio, and daughter. Antonio remains in ICE custody, without a bond hearing, following the Aug. 7 raids in Mississippi. Photo by Seyma Bayram

Hilda was confused when she saw people dressed in black T-shirts walking toward her and her colleagues one morning. Employees wore white shirts at the Pearl River Foods poultry-processing plant in Carthage, Miss., where Hilda worked as a lead person.

The letters "ICE" emblazoned across their chests terrified Hilda, who is an undocumented immigrant who asked to withhold her last name. She began to cry for her husband, Antonio, who was working in the plant's nearby box room at the time, and for her 8-year-old daughter, Aliza, who was attending her first day of second grade.

"I (thought) about my baby because I don't have family over here. My mom, my dad, my sisters is in Mexico," Hilda told the Jackson Free Press later.

Antonio, who has lived in America for 22 years, and Hilda were among the 680 undocumented immigrants that ICE arrested and detained in Mississippi on Aug. 7, 2019, in the largest statewide immigration raid in United States history.

The Carthage plant was one of six locations where ICE conducted raids, along with Canton, Sebastopol, Morton, Bay Springs and Pelahatchie.

ICE released Hilda that night, and she reunited with her daughter, though she has an open case due to working without papers. But Antonio remains in ICE custody, along with approximately 300 others arrested more than three months ago.

Hilda did not make contact with Antonio until a Jackson paralegal reached out to her on Facebook to say her husband was looking for her, too.

Now, Hilda and her daughter are trying to rebuild their lives without Antonio, whose video bond hearing before New York Immigration Judge Mary C. Baumgarten is scheduled for later this month. Their next-door neighbors, Lisa and Steve, have been providing the family emotional and financial support since both parents lost their jobs. Every Sunday, Steve drives the mother and child six hours round-trip to visit Antonio. The couple's presence provides some relief from the lingering trauma and fear Hilda and her daughter experience.

"Lisa is my neighbor. Now she is my family," Hilda said in tears.

Neighbors, clergy, activists and even local law enforcement stepped in to take care of those the Aug. 7 raids affected throughout Mississippi. In Forest, people brought scores of crying children into a community gym, until they could locate relatives or caregivers. Canton Mayor William Truly Jr. and Scott County Sheriff Mike Lee scrambled, in the latter's words, "to play catch up," as ICE had not notified their offices of the raids.

"We have a responsibility to keep people safe," Truly said. "When you have ICE coming and raiding your community, there is always a potentiality for escalation, escalation (where) perhaps the outcome may not be good." He added that authorities should have alerted agencies invested in protecting residents, from the police and fire departments to social services and schools. But ICE failed to inform anyone in Canton.

Such were the damning testimonies delivered Nov. 7 during the first field hearing on the Mississippi ICE raids, which Hilda and dozens of other families attended.

"Perhaps the most troubling aspect of these raids is the way ICE failed to take into account that children would be left without one or both parents as a result," Thompson emphasized during his opening remarks. "Hundreds of children, by some estimates, over a thousand children were directly affected by the raids."

'We Did Not Ask for This'

Two days after the raids, Thompson and two other congressmen sent an eight-page letter to Attorney General William P. Barr and Acting Secretary of Homeland Security Kevin K. McAleenan informing them they would investigate the raids.

The letter revealed that ICE had "failed to inform child protective services or schools in advance of the enforcement actions." It also expressed concern about the timing of the raids on the first day of school and following a $3.75-million legal settlement with Koch Foods in 2018 over race and sex-based discrimination against Hispanic workers.

Koch Foods owns several of the targeted poultry plants, and the congressmen demanded to know whether any employers or companies were arrested or charged for harboring undocumented workers. Thompson wanted documentation on the number of people ICE arrested and detained and for how long, the cost of the raids, the charges against the workers and who was still separated from their children.

The Nov. 7 hearings answered some of these questions. Immigration and Customs Enforcement spent $487,000 on labor alone on the day of the raids, Thompson said, though the total costs so far have reached $1.3 million, The Clarion-Ledger reported. ICE has not arrested or charged any employers despite a history of hiring undocumented workers in the southeast through the "Hispanic Project" and despite U.S. Attorney Mike Hurst's warning to employers. "If we find you have violated federal criminal law, we're coming after you," Hurst had said at a press conference on the afternoon of the raids.

As Thompson noted, not only have no employers been charged, but the prosecution of companies that employ undocumented laborers has decreased since Donald Trump took office. All the while, 300 undocumented people remain in ICE custody across 13 different facilities, Thompson told reporters after the hearing.

The hearing revealed additional troubling aspects of the raids, beyond no notification of local law enforcement, schools and governing officials.

The 680 arrested workers still have not received their last paychecks, totaling hundreds of thousands in back wages, Thompson said, and judges are detaining people on high bail or denying bail altogether.

Cliff Johnson, director of the MacArthur Justice Center at the University of Mississippi School of Law, said ICE charged more than 100 people with felonies due to prosecutorial discretion. Those arrested do not have records of violent behavior, and only a handful had prior misdemeanor convictions, he said.

"These raids were not carried out in response to any outcry from people here in Mississippi," Johnson said.

Lee echoed Johnson's point. He cited data from his local jail—of the 125 people currently detained there on criminal charges, three identify as Latino, and only one is a resident of Scott County.

"The Scott County Sheriff's Department does not have problems with Latino residents," Lee testified. He added that they are hard-working, respectful members of the community.

Lorena Quiroz, lead organizer with Working Together Mississippi and the Mississippi Immigrant Coalition, spoke of the need for language justice and translators. Many of those ICE arrested cannot speak Spanish, Quiroz said, but rather speak indigenous languages, such as Mam, which Guatemalan immigrants speak.

During one disturbing moment, Miles responded to questioning by suggesting that allegations of ICE separating parents and children were false.

"If you're going to use the definition of the word 'separate,' no, we did not, because 'separate' insinuates that the children were with them. Children were not with them," Miles said, as many in attendance shook their heads in disbelief.

"Is it true that you separated mothers who were breastfeeding?" Thompson asked Miles.

"My understanding is we received reports of that, and none of those reports ever bore out," Miles said.

"Well, I've got evidence ... that at least three mothers who were breastfeeding were separated from their babies," Thompson responded.

U.S. Rep. Al Green, D-Texas, grilled Miles. "You knew before you came that laws were being broken but you picked on the undocumented persons to the exclusion of the employers who were supposed to check the E-Verify system. Mr. Miles, this is not the way we treat people in the United States of America," Green said.

"I have enough dignity to apologize on behalf of the United States," U.S. Rep. Sheila Jackson Lee, D-Texas, said to the families in attendance, adding that the raids were "cruel" and "ineffective."

The field hearing touched on the impact of the raids on local economies, the cost of carrying them out, and back wages owed to workers, but it did not discuss the role of for-profit prison companies in immigration detention. Three-quarters of immigrant detainees are held at private jails and prisons throughout the country, data from the Migration Policy Institute show.

Families involved in the ICE raids listen to testimonies during the Mississippi field hearing at Tougaloo College on Nov. 7. Photo by Seyma Bayram

Although Mississippi is not listed as a location on ICE's detention facility tracker, ICE contracts with two private prisons here that CoreCivic, the nation's largest private prison company, runs—Tallahatchie County Correctional Facility in Tutwiler and the Adams County Correctional Center in Natchez. Concerns rose around Adam County's potential shutdown when CoreCivic said it would not renew its contract with the federal government once it expired July 31, 2019.

But by September, CoreCivic announced a new five-year-contract with ICE. The deal would add 50 jobs to the Adams County facility and potentially bring in $400,000 in yearly revenue to the county, the Natchez Democrat reported. The Adams County prison is one of two facilities where ICE initially detained workers before transferring them to 11 more jails.

Thompson did not rule out the possibility that ICE may have an incentive to keep the prison full because of such arrangements. "The notion that that facility was converted is a potential problem," he said, "and as you know, they sent people there ... on short order. They transferred them to the facility in Louisiana, and then when we tried to find people in Louisiana, they'd send them somewhere else."

Aliza misses her father. Before ICE detained him, Antonio played with her and helped her with her homework.

Regular visits are helping Aliza to cope with his absence, but the first visit was difficult, Hilda says.

Aliza cried when she saw her father for the first time since his arrest. "Why is my daddy in the jail?" she asked her mother. Hilda did not know how to respond.

It is unclear how many parents are still separated from their children, but Quiroz spoke of one woman who is facing deportation and currently separated from her three children, who are all U.S. citizens.

She emphasized the difficulty of fighting cases without resources to hire translators and support families, who are at risk of losing their houses and cars, and unable to pay their hospital bills.

"People have been wonderful, they have donated resources to us, but the money is running out, and this is ongoing," Quiroz said.

"There are no alternatives to employment. They are wearing ankle monitors—who is going to hire them?" she said. About two more months of aid funds remain through the immigrant coalition. "After that, what happens?" Quiroz asked.

CORRECTION: An earlier version of this story listed Forest as a raid site. While some of the workers arrested in the raids lived in Forest, the town was not a raid site. The story has been changed to reflect this.