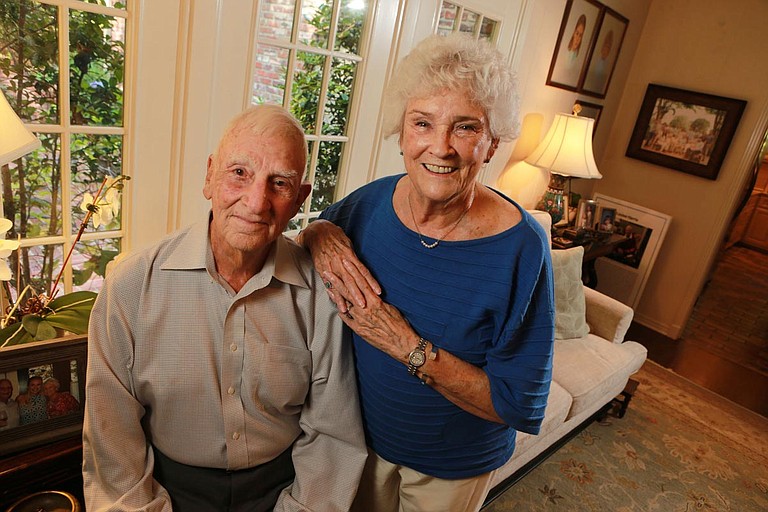 TUPELO, Miss. (AP) — Smitty Harris can tell a good story, one that's filled with horror and humor, heroism and honor, and has the power to keep listeners teetering on the edge of their seats.

And one more thing: His story's totally true.

Retired Air Force Col. Carlyle "Smitty" Harris, originally from the small agricultural village of Preston, Maryland, was 36 years old with a wife, two young daughters and a third baby on the way when his plane was shot down over Vietnam on April 4, 1965.

He was the sixth American Prisoner of War captured in North Vietnam and would spend nearly eight years at the Hoa Lo prison, better known as the Hanoi Hilton.

Smitty Harris, 90, would be the first to make it known that without Louise, his partner in all things, his story would likely be very different.

The two met when a young Louise Lambert agreed to ride the 40 miles from Tallahassee, Florida, to Bainbridge Air Base in Georgia with a boy she'd dated.

"He wanted to go and get some tips from some pilot," she said. "I agreed to ride with him."

The pilot to whom she was introduced was Smitty Harris, who later called her for a date, which turned into several dates.

On Dec. 5, the couple will celebrate 60 years of marriage.

The Harris family — Smitty, Louise, 4-year-old Robin and 3-year-old Carolyn — relocated to Kadena Air Base in Okinawa, Japan, where Smitty Harris would fly the F-105 fighter-bomber.

After he was shot down and taken prisoner by the North Vietnamese, Louise chose to move the family — which by then included baby son Lyle — to Tupelo because her sister lived here.

"It was a wonderful, wonderful choice," 81-year-old Louise Harris said of making Tupelo their new home.

Because the girls were so young, their mother told them their father's airplane had gotten broken and he would come home as soon as he could.

"I always believed he would come home," she said.

Prior to going overseas, Smitty Harris sat in a stateside classroom and listened with great interest as an instructor spoke of World War II prisoners having communicated by tapping on a water pipe.

"As we were walking out of class, I asked, 'How did they send the dashes?' thinking it was Morse Code," he said. "He took me to the chalk board and showed me the tap code."

Whether through good fortune or serendipity or divinity, the young fighter pilot's learning — and remembering — the tap code changed the course of his eight years in captivity.

He began to pass it along to other POWs early on and it spread like a chain reaction.

It was crucial to communicate, but difficult and dangerous. If the guards heard tapping, the prisoners would be tortured.

Still, they tapped when they could.

"Anything we could do to make a sound, we'd do it in tap code," Harris said. "We'd sweep in tap code, cough in tap code. Once when I was outside chopping weeds, I chopped in tap code.

"Tap code had a cadence. You would hear it and immediately listen. It was absolutely essential for us to know we were not alone. It gave us unity. We'd tap poems, Scripture, jokes, educational things. It kept us busy. It took a lot of time, so it was one of the most constructive things we could do."

There were times — too many to count — when a prisoner was taken from his cell, beaten and tortured mercilessly and then tossed back into his cell.

Those were the moments the tap code brought comfort and compassion, when other POWs would tap GBU, GBU — which means, God bless you, God Bless you.

Smitty Harris said he was never uncomfortable talking about his time in Vietnam.

"It never was a problem for Smitty to talk about his experience," said his wife, reaching out to gently touch his arm. "I always told myself, 'He will come home, we will pick up our lives and go on.' He did and we did."

Some members of the Harris family, however, wanted more of their loved one's well-told story.

"Louise and Robin had been nicely nagging for years for me to write it down," Harris said.

And in 1973, he started writing and completed a good bit of a manuscript.

"But it was not intended for publication," he said. "It was just a chronicle."

Daughter Robin Waldrip took matters into her own capable hands and asked her friend Sara Williams Berry, an author and publisher, if she'd consider writing her father's story.

"I was honored, drawn to the story like a moth to a flame," she said. "But my initial response was, 'I don't think I can do it.' I wasn't even born when he was shot down and, sadly, I didn't know a lot about Vietnam and its history."

But Berry promised Waldrip she'd pray about it.

"Robin and I prayed together at that moment," Berry said. "And later that night I turned to a daily Scripture I'd not had time to read earlier in the day. Now, this is paraphrasing, but it was from Jeremiah and said, 'Write it in a book of how the Lord will deliver his people from captivity ...'"

And that was that.

Berry began meeting weekly with the Harrises, putting their words into her computer. It took about a year to finish "Tap Code," which is published by Zondervan and launched Nov. 5.

"Sara is really good at putting a conversation on computer and getting it accurate," he said. "She worked so hard."

At one point when Berry was well into the writing of the book, an accident slowed her down, giving her a bit more down time for writing.

"It was the Saturday after Thanksgiving last year," said the mother of seven. "I stepped in a hole and sprained my ankle, then broke the other one. All I could do was worry and agonize over how I was going to do Christmas for the family.

"But I absolutely could not feel sorry for myself for such a little inconvenience, after what Smitty went through. Getting to know Smitty, Louise and hear their stories has been a good life lesson for me."

The Harrises love their time with their children, their seven grandchildren and four great-grandchildren. They also enjoy traveling.

Through the years, they've been to countless reunions of former POWs.

"The closest to me in North Vietnam were my cellmates, but I've come to know others well in reunions," Smitty Harris said. "Most I didn't get to see face to face until we came home."

Now their travels will include a nationwide book tour which started on Saturday, Nov. 9 right here in the place the Harrises call home.

Many of the signings will be at Air Force bases in places like Seattle, Washington; Sacramento, California; Washington, D.C.; San Antonio, Texas; and more.

There'll also be some radio and television appearances.

Berry said she won't be present at all the signings, but if a visit to New York City works out, she's in.

"I will go along to carry the luggage," she said, laughing. "I just want to sit back and watch it all happen, see these wonderful people get the attention so rightfully deserve."

The veteran, with the love of his life at his side, is taking all the attention in stride.

"My prime motivation in all this was to get something in print for my family," he said. "Mostly I'm just trying to cooperate with the publisher."