Rocket Fizz at the Outlets, Beanfruit and Thunderhead Merge and Gallery Garden 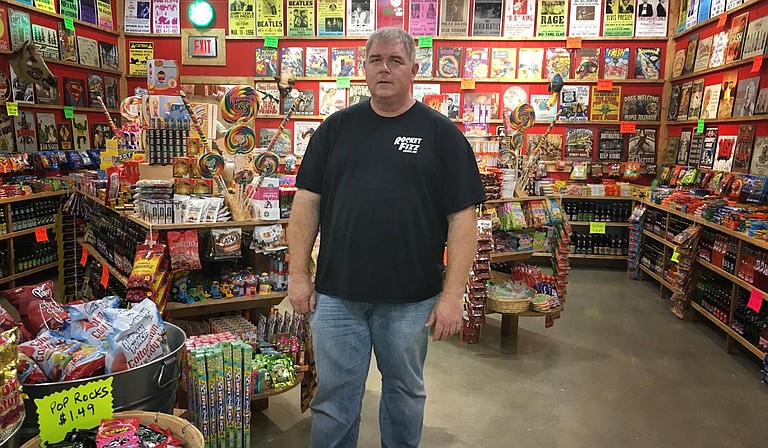 Shreveport, La., native Richard Morris (pictured) brought Rocket Fizz, a California-based specialty soda and candy franchise, to Mississippi with the opening of a new store at the Outlets of Mississippi on Wednesday, Nov. 6. Photo by Dustin Cardon

Shreveport, La., native Richard Morris brought Rocket Fizz, a California-based specialty soda and candy franchise, to Mississippi with the opening of a new store at the Outlets of Mississippi (200 Bass Pro Drive, Pearl,) on Wednesday, Nov. 6.

The Rocket Fizz at the Outlets carries more than 420 different types of soda, including flavors from Rocket Fizz' own brand. Photo by Dustin Cardon

Rocket Fizz co-founders Robert Powells and Ryan Morgan opened their first store in Camarillo, Ca., in 2009. The store carries hundreds of varieties of specialty soda flavors from around the world, as well as old-fashioned candies, gag gifts and pop culture items.

Morris first discovered Rocket Fizz in 2015, when Powells appeared on an episode of the television show "Undercover Boss." Morris says he loved the concept of the store so much that he decided to become a franchisee and start working to open his own store. He opened his first store at the Louisiana Boardwalk Outlets in Bossier City in March 2016 and a second store in Arlington, Texas, in 2017.

Rocket Fizz carries its own brand of taffy in more than 85 flavors, as well as old-fashioned candies, gag gifts and pop culture items. Photo by Dustin Cardon

The Rocket Fizz at the Outlets carries more than 420 different types of soda, Morris told the Jackson Free Press, including flavors from Rocket Fizz' own brand. The store also carries its own brand of taffy in more than 85 flavors.

"Rocket Fizz is all about taking you back to your childhood with nostalgic, hard-to-find candies and sodas," Morris says. "I thought the idea of the store was so cool from the moment I saw it, and from the responses I've been getting since we opened, other people agree. Customers have been telling me this past week that Mississippi needed something like this."

Paul Bonds, owner of BeanFruit Coffee in Jackson, is partnering with Thunderhead Coffee owner Greg Jacob to merge their coffee shops into one location in Flowood. The grand opening of the new shop will take place on Friday, Nov. 15, and will include a ribbon-cutting ceremony at 10:30 a.m.

The new location is an 8,000 square foot warehouse space on Flowood Drive that includes a factory roasting production area, a lab and coffee training facilities and a walk-in coffee shop that will sell retail items and coffee equipment, a release from Thunderhead and BeanFruit says.

For more information about each business, visit thunderhead.com and beanfruit.com.

The Gallery Garden at the Mississippi Museum of Art

The Mississippi Museum of Art unveiled The Gallery Garden, a renovated pedestrian walkway that connects the museum's main entrance and The Art Garden on its grounds to the museum's West Street entrance, during a ceremony on Thursday, Nov. 7

At the unveiling ceremony, the museum recognized individuals and organizations who donated a total of $337,611 to fund the renovation. Kane Ditto and Malcolm White of the Mississippi Arts Commission supported the project through MAC's Building Fund for the Arts Initiative. Jane Alexander of the Community Foundation of Mississippi contributed through a bequest from the estate of John F. and Lucy E. Shackelford. The National Endowment for the Arts also donated to the museum.

The renovations to the walkway include art installations, exterior lighting upgrades and new directional signage. For more information visit msmuseumart.org.