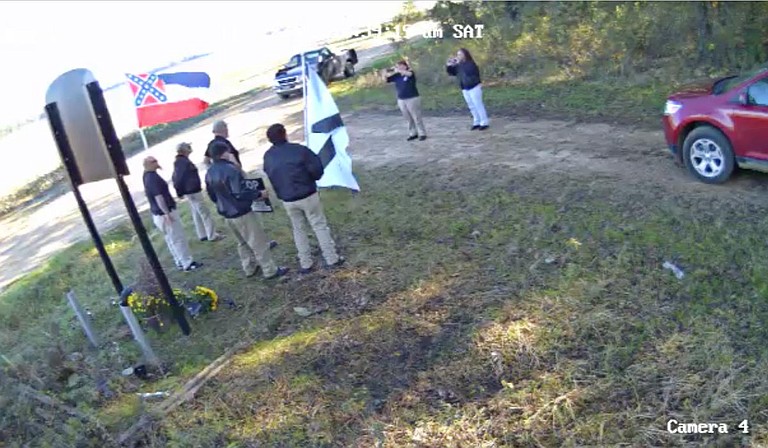 A small clan of white supremacists unintentionally helped a Mississippi anti-racism organization raise more than $30,000 in just six days after filming a propaganda video around the memorial of Emmett Till, the 14-year-old victim of a 1955 civil-rights murder.

Emmett Till Center Director Patrick Weems, whose organization is behind the Tallahatchie County monument, confirmed the figure to the Jackson Free Press on Friday. Supporters donated through the center's website at emmett-till.org. The center tweeted its "thanks" to the white supremacists yesterday.

"Our annual budget is around $150,000," Weems told the Jackson Free Press on Friday afternoon. "We are in one of the poorest counties in the United States. This funding is transformational for us."

The Jackson Free Press first broke the story last Saturday after Weems sent surveillance footage of the white supremacist group, The League of the South, carrying a Mississippi flag and a LOS flag around the marker.

They were filming a propaganda video when alarms went off at the new memorial marker, which the center had erected just a few weeks earlier. The center has repeatedly had to replace the markers after vandals shot up past iterations with bullets. The new marker is bulletproof, and the center monitors it with security cameras.

Since that story went viral, the Emmett Till Center's Twitter account, @EmmeTill, has grown from just a few hundred followers to almost 17,000.

League of the South is a neo-Confederate group based in Killen, Ala., that the Southern Poverty Law Center describes as fighting for a future in which a white elite "would establish a Christian theocratic state and politically dominate black people and other minorities."

The Center's surveillance footage, though, showed members scurrying to cars as security alarms wailed. Before running, though, they filmed their propaganda video.

"We are here at the Emmett Till monument that represents the Civil Rights movement for blacks," League of the South leader Michael Hill says, while two women film. "What we want to know is, where are all the white people over the last 50 years that have been murdered, assaulted and raped by blacks going to be memorialized like this? We are League of the South."

Hill was playing on a long history of false, racist claims that African Americans are inherently more violent than white people--a lie that Donald Trump himself repeated when he retweeted a white supremacist's fake statistics in 2015. The Bureau of Justice Statistics shows, though, that white people commit the overwhelming majority of crimes against white people.

Before founding League of the South in 1994, Hill was a professor of British history at Stillman College--a historically black college in Tuscaloosa, Ala.

All but one of the people in the video are from Alabama. The man carrying the white LOS flag, which has a black Confederate-style 'X' across it, was Mississippi LOS leader Shaun Winkler.

Racists long used lies of deeply held beliefs, later supposedly borne out by "scientific racism" and false claims about a genetic predisposition to violence to justify thousands of lynchings of black people in the years after the Civil War. Black men were often lynched after being falsely accused of raping white women.

Till's killers justified his 1955 murder by pointing to Carolyn Bryant, a white woman, claiming that the 14-year-old boy whistled at her in a grocery store. Three white men then brutally beat him before dumping his body in the Tallahatchie River. A white jury acquitted the men who killed him.

Seven decades later, in 2017, Bryant admitted that she had made the whole thing up; the boy never whistled at her, she said.

"I think there's an obvious irony that the hate flag they used was the Mississippi flag. And I would hope that our politicians and political leaders would recognize how hateful that flag is to many people in the State of Mississippi," he said.

Jackson Free Press editor Donna Ladd reported in 2017 on similarities between "white nationalist" and neo-Confederate groups like the League of the South and the Sons of Confederate Veterans. Gov. Phil Bryant, an SCV member, annually declares April as Confederate Heritage Month. The group gave Bryant an award last year named after former Mississippi Gov. John J. Pettus, a slave holder who presided over secession during the Civil War. He argued that secession was the only way to preserve slavery.