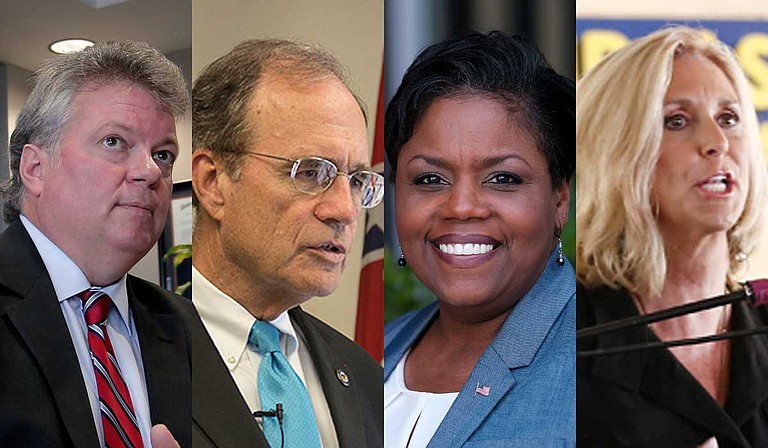 Mississippi voters headed to the polls starting at 7 a.m. Tuesday to vote for top State and regional offices, including the election for governor. Polls will remain open until 7 p.m., when election workers will begin tallying up the vote. Mississippians must bring a State-approved form of photo ID to vote, such as a driver's license or student ID.

More information on voter ID is available on the secretary of state's website. A sample ballot for Hinds County voters is available here.

The secretary of state's office spent much of the morning correcting misinformation. Some voters received letters from an organization called the Center for Voter Information, which gave "neighborhoods a 'grade' based upon voters' alleged previous vote history according to party affiliation."

Mississippi does not register by party, though.

"Correspondence like this is intimidating and misleading and ultimately deters voters from going to the polls to cast a ballot," Secretary of State Delbert Hosemann, who is running as the Republican nominee for lieutenant governor, said in a statement Tuesday morning.

Also on Tuesday morning, the Hinds County Facebook page initially sent out a message encouraging voters to "VOTE IN THE MISSISSIPPI GENERAL ELECTION TODAY, NOVEMBER 11TH." That message was up for over an hour before Hinds County replaced it with today's correct date: Nov. 5.

The cover of the current Jackson Free Press also gave the wrong election date due to a typo no one caught before the issue went to print. We have sent out notices in social media correcting the error. A small graphic on the cover said, "Vote on Tuesday, November 8," rather than Nov. 5, although a full-page add on page 5 listed the correct date. We apologize for missing the mistake.

In the Mississippi governor's race, Republicans last night began circulating a recording of a robocall former President Barack Obama made, urging Democrats to vote for their nominee, Jim Hood, even as others claimed on social media that it was fake.

"At the 11th hour Jim Hood had Barack Obama endorse him for Governor of Mississippi," current Republican Gov. Phil Bryant tweeted Monday night. "Now we finally know what he really believes. Vote Republican tomorrow and end this once and for all."

While Bryant and other Republicans sought to portray the Obama endorsement as a scandal, they have openly touted President Donald J. Trump's support for Reeves—despite the fact that Trump is facing an impeachment inquiry, is implicated in multiple federal and state criminal investigations, and that numerous of his former aides from his time on the campaign trail and in the White House are under investigation, in prison, or awaiting sentencing.

Going after Democrats by emphasizing their ties to people of color is not a new tactic in Mississippi politics—or in this election. During both his Republican primary against Republican opponent Bill Waller and the general election against Hood, Reeves sent out mailers showing his opponents near images of national figures like U.S. House Rep. Alexandria Ocasio-Cortez, D-N.Y., and U.S. House Rep. Ilhan Omar, D-Minn.

During Reeves' first race for Mississippi treasurer in 2003, Democrats accused the GOP of helping him beat a more qualified opponent by sending mailers out to white voters that included a photo of the Democratic candidate, Gary Anderson, who is African American.

"@JenniferforAG is a proven public servant and civil rights lawyer; she has the lived experience Mississippi families desperately need to move the state forward. Mississippians, you have a chance to make history today," Harris tweeted.

A federal judge declined to block the law ahead of the election. While some polls show Hood with a narrow lead over Reeves in the governor's race, plaintiffs in that court case told the judge that a Democratic candidate might have to win 55% of the vote in order to win the election under the current system because of the way House districts are distributed.

When Mississippi first adopted the 1890 Constitution that implemented this system, one of its framers, then House Rep. James K. Vardamn, explicitly said that the purpose of the new constitution was to curtail black voting power.

"There is no use to equivocate or lie about the matter. Mississippi's constitutional convention was held for no other purpose than to eliminate the n——r from politics; not the ignorant—but the n-——," admitted Vardaman, who later became governor and then a U.S. senator.

In the race for governor, Hood is holding an election night watch party in Jackson at The King Edward Hotel's 2nd floor ballroom at 235 W. Capitol St. starting at 7 p.m.

The Mississippi Republican Party is holding an election-night watch party for Reeves and all other GOP statewide candidates beginning at 7:30 p.m. in Jackson at The Westin Hotel on 407 South Congress St.

A full list of candidates for statewide and regional office is below.

"Streamlining state government to operate from the citizen up, not bureaucracy down."

"It's all about education."

"I support smart reforms that ensure we prioritize people over prison." (JFP questionnaire)

"I look forward to bringing my conservative record of consistent success in the Legislature to the Secretary of State's office." (website)

"I am running for insurance commissioner for all families in Mississippi regardless of political affiliation, race, sexual affiliation or religion." (Meridian Star)

"The aim is to create the highest degree of economic security, quality of life and public safety for citizens at the lowest possible cost." (website)

"We will make sure the future of Mississippi agriculture will remain strong."

"Change our food system for the better."