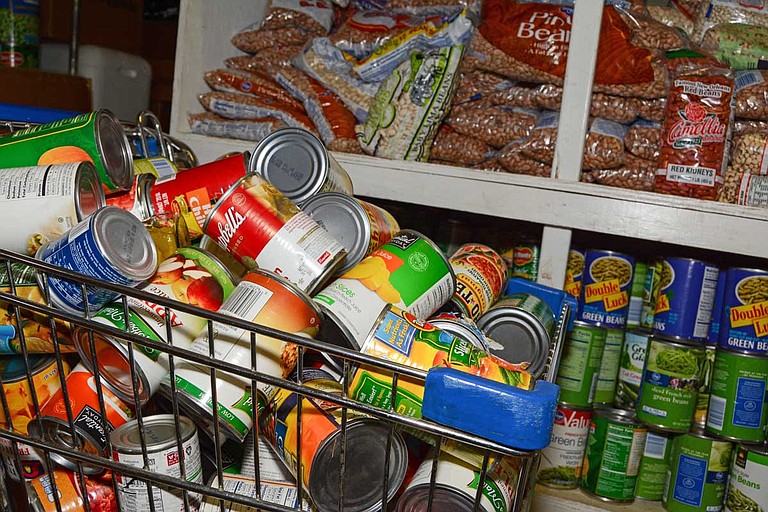 The Stewpot food pantry serves more than 5,000 people per year, half of which are senior citizens age 65 or over, Buckley says. Stewpot also provides guests with travel bags of items that don't need heating, including canned food, dried fruit and other items. File Photo by Trip Burns

The Stewpot food pantry originally opened more than 30 years ago in the basement of the renovated church that the organization operates out of and reopened in its new location on Oct. 21. The new facility is wheelchair accessible and will operate more like a grocery store than a standard food pantry, Stewpot Executive Director Rev. Jill Buckley told the Jackson Free Press.

"This change is something we've been working toward for several years, and we're excited to be able to serve the community in a respectful and dignified manner," Buckley says. "Previously, you had to go downstairs for access to the pantry, so this is much better for mobility-challenged people. Client choice will also now be part of the process, and people can use a grocery cart and shopping list to choose their own food rather than have it chosen for them."

The Stewpot food pantry serves more than 5,000 people per year, half of which are senior citizens age 65 or over, Buckley says. Stewpot also provides guests with travel bags of items that don't need heating, including canned food, dried fruit and other items.

Stewpot's community kitchen is free and open to all visitors for lunch service every day at noon. The food pantry is open in the morning, and service there ends when lunch service begins.

The St. Dominic Community Health Clinic serves adults age 18 or over who don't have health insurance. The clinic serves more than 3,000 clients per year, Buckley says, and offers primary care, flu shots, over the counter medication and more. The clinic is open Monday through Thursday from 8 a.m. to 3 p.m. For more information, call 601-353-2759 or visit stewpot.org.

The Mississippi Arts Commission announced the recipients of the 2020 Governor's Arts Awards on Thursday, Oct. 31. The MAC established the awards in 1988 and presents them in partnership with the governor's office.

MAC will recognize the 2020 recipients the 32nd Governor's Arts Awards ceremony at the Old Capitol Museum on Feb. 6, 2020.

Henry Danton, a 100-year-old world ballet dancer and teacher from Petal, Miss., received the lifetime achievement in dance award. Danton still teaches in south Mississippi and at Belhaven University. He has taught at Carnegie Hall's Ballet Arts, the Martha Graham Dance Company and The Juilliard School.

Steve Forbert, a Meridian-native singer-songwriter, received the excellence in music award. Forbert began his career in New York City performing on street corners and later at Greenwich Village clubs before earning his first record label deal. Between 1978 and 1982, he released four albums before moving to Nashville. His album "Any Old Time" received a Grammy nomination in 2003 for Best Traditional Folk Album. In 2006, he was inducted into the Mississippi Musicians Hall of Fame.

The Jackson Southernaires, an 80-year-old gospel group and the first group in Mississippi to use keyboards, guitar, drums and bass instruments in gospel, received the lifetime achievement in music award. Formed in 1940, the group began recording in 1969 and has released 28 albums. The group received a Grammy nomination in 1992 for Best Traditional Gospel Album for "Thank You Mama for Praying for Me."

Richard Kelso, a Cleveland, Miss., native painter, received the excellence in visual art award. Kelso, who has been painting for more than 30 years, has his work on display in permanent collections of The Mississippi Museum of Art and the Lauren Rogers Museum of Art.

The Tougaloo Art Collection, a fine art collection on the campus of Tougaloo College in Jackson, received the preservation of the arts award. A group of activists, curators and critics formed the New York Art Committee for Tougaloo College during the Civil Rights Movement in the 1960s. Today the collection includes more than 1,500 works, including sculpture, paintings, decorative arts and textiles.

The W.K. Kellogg Foundation recently gave a $1 million grant to the William Winter Institute for Racial Reconciliation, a nonprofit organization originally founded on the University of Mississippi campus in 1999 to promote racial equity in communities across Mississippi.

The Winter Institute operates programs such as Welcome Table, which encourages groups of people to come together and tell their stories to promote community building and solve civic problems; the Summer Youth Institute, a nine-day program for youth to discover the value of diversity and build leadership and advocacy skills; and Rethink Mississippi, a policy and civic engagement platform for community leaders and their constituents.

In 2018, the Winter Institute moved from the UM campus to its current headquarters in downtown Jackson. The Internal Revenue Service also recently recognized the institute as an independent nonprofit corporation.