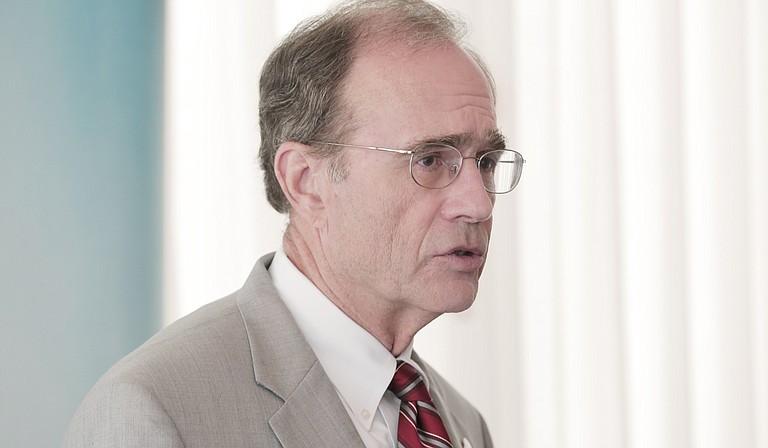 The lawsuit was filed May 30 against two Republican officials — Secretary of State Delbert Hosemann (pictured), who is Mississippi's top elections officer, and House Speaker Philip Gunn, who would preside if there's a House vote to decide a statewide race. Photo by Imani Khayyam

JACKSON, Miss. (AP) — A federal judge ruled Friday that he will not immediately block Mississippi's unique, multistep process for electing a governor and other statewide officials.

U.S. District Judge Daniel P. Jordan III said he would not issue a preliminary injunction to prevent the system from being used in Tuesday's elections.

Mississippi's 1890 constitution requires a statewide candidate to win a majority of the popular vote and a majority of the 122 state House districts. If nobody wins both, the election is decided by the House, and representatives are not obligated to vote as their districts did.

The process was written when white politicians across the South were enacting Jim Crow laws to erase black political power gained during Reconstruction, and the separate House vote was promoted as a way for the white ruling class have the final say in who holds office.

African American plaintiffs who sued the state this year have argued that the system unconstitutionally violates the principle of one person, one vote. Their attorneys said Mississippi's history of racially polarized voting means that candidates preferred by black voters must receive a higher share of the statewide vote to win a majority of House districts.

Jordan wrote Friday that he would issue a separate order on state officials' request that he dismiss the lawsuit.

No other state in the U.S. uses such a method to choose governor, and it's rare for a race to be decided by the Mississippi House. That last happened in 1999, when nobody received the required majorities in a four-person race for governor. The top two candidates were white, and each won 61 electoral votes. House members chose the Democrat who had received the most votes. At the time, the House was controlled by Democrats. It is now controlled by Republicans.

The two major-party nominees for governor this year are Republican Lt. Gov. Tate Reeves and Democratic Attorney General Jim Hood. Both are white, but Democrats generally fare well among black voters and Republicans among white ones.

The lawsuit was filed May 30 against two Republican officials — Secretary of State Delbert Hosemann, who is Mississippi's top elections officer, and House Speaker Philip Gunn, who would preside if there's a House vote to decide a statewide race.

Eric Holder, who was the first African American to serve as U.S. attorney general, is now chairman of the National Democratic Redistricting Committee, whose affiliated foundation is providing financial and legal backing for the lawsuit.

When Jordan heard arguments Oct. 11, he said few federal court rulings have provided clear guidance for how he should decide the case, which includes arguments over whether the electoral system violates the constitutional principle of one person-one vote and, if so, whether a violation occurs when voters cast ballots or at some point later in the process.

Jordan raised questions about the timing of the case that challenges a system in place nearly 130 years, and he said courts are "generally ill-equipped" to decide what kind of voting laws a state should have.

"No matter what I do, I would encourage the other side to appeal immediately," Jordan said during the Oct. 11 hearing.