Trump Stumping in Mississippi Ahead of Tough Governor's Race 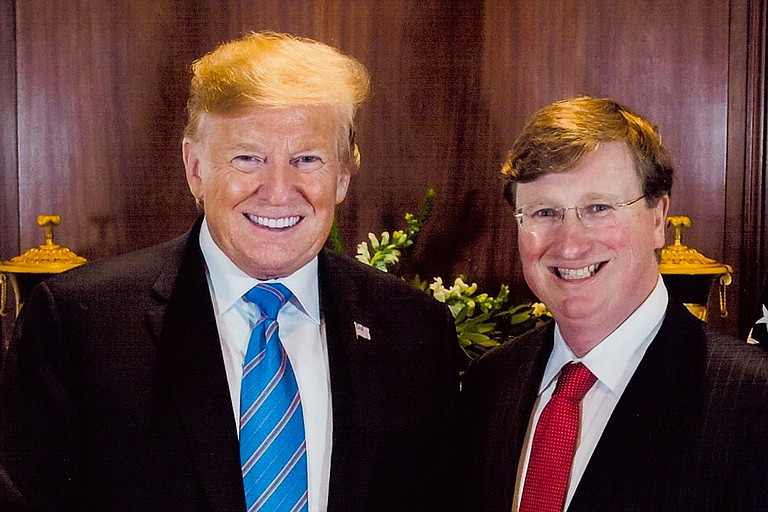 JACKSON, Miss. (AP) — President Donald Trump is traveling to Mississippi on Friday to try to shore up Republican support ahead of the state's toughest governor's race in nearly a generation, with two established politicians competing for the open seat.

Four years ago, Mississippi's Democratic nominee governor was a little-known trucker who did not vote for himself in the primary and went on to lose the general election by more than 34 percentage points. Republicans have held the Mississippi governorship for 24 of the past 28 years.

This year, though, Democrats in this conservative Deep South state think they have a much better shot in Tuesday's election with Jim Hood as their nominee. Hood, 57, is serving his fourth term as attorney general and has been elected by wide margins in his previous races. He's currently the only Democrat to hold statewide office.

Trump will hold an evening rally in the northern Mississippi city of Tupelo to support Hood's opponent, Republican Tate Reeves. Reeves, 45, is finishing his second term as lieutenant governor after previously serving two terms as the elected state treasurer.

In the race to succeed term-limited Republican Gov. Phil Bryant, Reeves has spent $10.8 million, and Hood has spent $5.2 million. Both are receiving financial support from national governors' groups in their parties.

Vice President Mike Pence is set to appear on the Mississippi Gulf Coast on Monday.

The events with Trump and Pence will be the largest campaign rallies for either gubernatorial candidate. Reeves and Hood have both focused on speaking to small groups at fish fries, local festivals and volunteer fire departments.

Reeves has sought to tie Hood as closely as possible to national Democrats, such as House Speaker Nancy Pelosi, who are deeply unpopular in a state that voted heavily for Trump in the last presidential election.

Reeves says under Republican control in Mississippi, students are seeing academic gains and lawmakers are building up the state's financial reserves.

"Mississippi is moving in the right direction," Reeves says in one of his campaign commercials. "We need a governor strong enough to take us to our full potential. Jim Hood won't, but I will."

Hood says Reeves and other Republicans have underfunded schools and ignored the financial plight of rural hospitals while giving tax breaks to big businesses.

Hood has not invited national Democratic figures to Mississippi. He's running campaign commercials that show him with his family, his pickup truck and his hunting dog, Buck. In one, Hood unpacks a rifle and says that "Tate Reeves and his out-of-state corporate masters" are spending money on a "bunch of lies."

"You all know me. I've worked for you for years. I do my job and I'm a straight shooter," Hood says. The spot ends with Hood shooting the gun and shattering a bottle.

Hood is also running radio ads designed to appeal to African American voters — one with an endorsement from former U.S. Rep. Mike Espy, who ran a strong but ultimately unsuccessful race for U.S. Senate in Mississippi last year and another that mentions Hood leading the successful 2005 prosecution of reputed Ku Klux Klan leader Edgar Ray Killen in the 1964 slaying of three civil rights workers.

The outreach reflects the importance of black voters to any possible Hood victory. African Americans make up 38% of the state's population, but some say they're irritated by Hood's emphasis on courting rural white voters.

Brad Franklin of Jackson, an African American entrepreneur and rapper, said he usually supports Democrats and will vote for Hood. But, Franklin said he's put off by Hood using one type of message for black audiences and another for "rural Mississippians."

Franklin said Hood and other Democrats need to try harder to earn young voters' support, and he believes some will stay home rather than turn out for Hood.

Reeves has faced some enthusiasm problems of his own in the Republican party. He was forced into a runoff with Bill Waller Jr., former chief justice of the Mississippi Supreme Court.

Reeves has a reputation as a hard-nosed politician who's not afraid to make enemies.

Teachers upset about tight education budgets gave him the silent treatment when he appeared before them this the summer. Roadbuilders say his fondness for frugality has left the state with crumbling highways and perilous bridges.