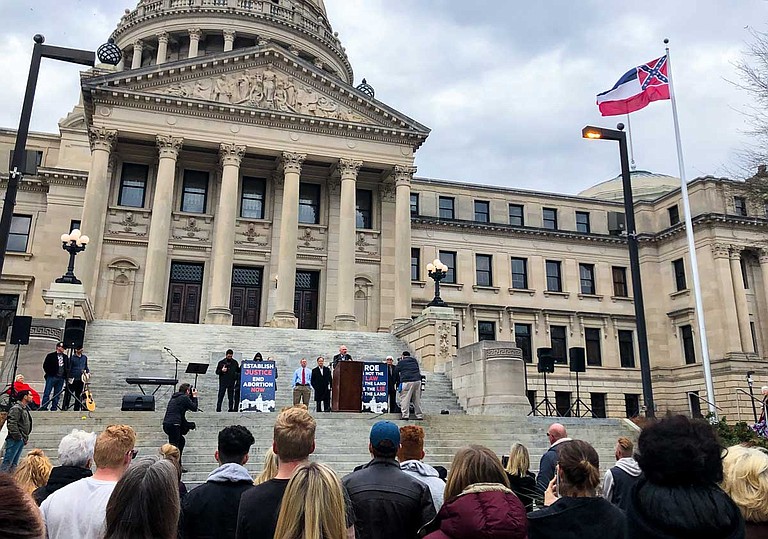 Operation Save America, an anti-abortion extremist organization, calls for an end to abortion in Mississippi from the steps of the state Capitol building on Jan. 22, 2019. One placard, referring to the 1973 U.S. Supreme Court Roe v. Wade case that legalized abortion nationwide, reads: "Roe Is Not the Law of the Land, It Is the Lie of the Land." Photo by Ashton Pittman.

WASHINGTON (AP) — The Supreme Court signaled Tuesday it is more open to state restrictions on abortion, upholding an Indiana law supported by abortion opponents that regulates the disposal of fetal remains.

At the same time, the justices declined to take on an issue closer to the core of abortion rights, rejecting the state's appeal of a lower court ruling that blocked a ban on abortion based on gender, race or disability.

Both provisions were contained in a law signed by Vice President Mike Pence in 2016 when he was Indiana's governor.

The court's action keeps it out of an election-year review of the Indiana law amid a flurry of new state laws that go to the very heart of abortion rights. Alabama Gov. Kay Ivey this month signed a law that would ban virtually all abortions, even in cases of incest and rape, and subject doctors who perform them to criminal prosecution. That law has yet to take effect and is being challenged in court.

Other states have passed laws that would outlaw abortion once a fetal heartbeat has been detected, typically around six weeks of gestation.

The high court is expected to hear at least one abortion-related case in its term that begins in October and ends in June 2020. In February, the justices blocked a Louisiana law that regulates abortion clinics, pending a full review.

On Tuesday, with two liberal justices dissenting, the court allowed Indiana to enforce a requirement that abortion clinics either bury or cremate fetal remains following an abortion, reversing a ruling by the 7th U.S. Circuit Court of Appeals court that had blocked it. The justices said in an unsigned opinion that the case does not involve limits on abortion rights.

Justices Ruth Bader Ginsburg and Sonia Sotomayor dissented. Ginsburg said in a short solo opinion that she believes the issue does implicate a woman's right to have an abortion "without undue interference from the state."

And Alyssa Farah, Pence's spokeswoman, drew a direct link to abortion. Pence commended the court for "upholding a portion of Indiana law that safeguards the sanctity of human life by requiring that remains of aborted babies be treated with respect and dignity," Farah said in a statement.

Pence also hopes the court will eventually review the other abortion provision at issue Tuesday, she said.

The Chicago-based appeals court had blocked a measure that would have prevented a woman from having an abortion for reasons related to race, gender or disability. While the justices declined to hear the state's appeal of that blocked provision, they indicated their decision "expresses no view on the merits."

"Although the court declines to wade into these issues today, we cannot avoid them forever," he wrote. No other justice joined Thomas' opinion.

Thomas and Ginsburg also engaged in a brief battle of dueling footnotes in which Thomas said Ginsburg's dissent "makes little sense." Ginsburg wrote that Thomas' footnote "displays more heat than light," including his calling a woman who has an abortion a mother. "A woman who exercises her constitutionally protected right to terminate a pregnancy is a not a 'mother,'" she wrote.

One other noteworthy aspect of the court's action Tuesday was the silence of liberal Justices Stephen Breyer and Elena Kagan, who vote regularly to uphold abortion rights. By not joining their liberal colleagues in dissent, Breyer and Kagan helped Roberts in his desire to avoid, where possible, controversial outcomes that split the five conservatives and four liberals. The two also may have preserved their ability to negotiate with, if not influence, Roberts in other cases.

The court upheld the fetal remains provision under the least stringent standard of review that courts employ. The legislation only needed to be rationally related to the state's interest in the proper disposal of the remains, the court said. Indiana met that burden, it said.

The court said it is leaving open court challenges to similar laws under a higher legal standard.

Both abortion rights supporters and opponents believe the court is more likely to favor all manner of abortion restrictions, now that two appointees of President Donald Trump — Justices Neil Gorsuch and Brett Kavanaugh — have joined the court and Justice Anthony Kennedy has retired.