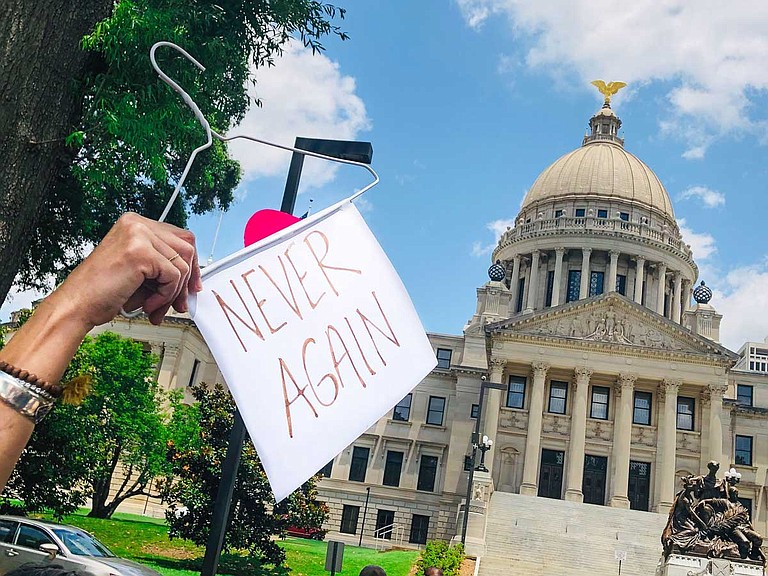 Yazoo City resident Mindy Brown protested for abortion rights outside the Mississippi Capitol on May 21 with this prop—an allusion to a pre-Roe era when women used hangers to self-induce abortions, often with deadly results. Photo by Ashton Pittman.

"Here we go again. Mississippi has passed another law banning abortions prior to viability." That's how U.S. District Judge Carleton W. Reeves started his latest ruling blocking yet another attempt by Mississippi leaders, mostly men, to keep women here from exercising our constitutional right to an abortion. These men want to forbid women's vital personal choices—from saving our own lives, to not having our rapist's or dad's child, to deciding that it isn't the right time for us to have or raise children, economically or otherwise.

Women take these decisions very seriously because they are key to our existence. Pregnancy is life-changing and a choice that affects our own lives, those we love around us and the new baby itself, especially if we are not in the position to care for it.

Mississippi women know what's up. Back in 2011, Gov. Phil Bryant led a crusade to not only take away women's right to a safe abortion, but also to block birth-control pills (even for health reasons) as well as access to in vitro fertilization when he chaired the Personhood effort. People here roared back, defeating the initiative handily at the polls and shocking the nation because we could spot political chicanery designed to hurt women and control our health-care choices—and push for limited government spending and services—even here in the heart of Dixie.

Some things are universal, or should be. That includes never forcing a woman to have a child, lose her contraception or forbid a safe way to help her have a baby.

The tell is that these kinds of laws never hold men responsible for their role in pregnancies or not using birth control. I like to say that if abortion is considered murder, then there is no statute of limitations, and that should mean that every man who ever insisted on or paid for one should be criminally charged for conspiracy at least. I suspect this addition to the anti-abortion efforts of our well-heeled politicians in state legislatures would convince them to pass on this effort to control women's choices and options in a matter of minutes.

Imagine, for instance, the stories the walls of the old Sun & Sand Motel and the Edison Wathall in Jackson would tell.

These guys' wink-wink excuse is they care about "life." I'm here to call bullshit on that claim. No evidence actually backs it up. Quite the contrary, in fact.

On May 20, Gov. Bryant tweeted: "A man has to stand for something or he will fall for anything. I stand with the unborn."

That may be one of the more honest things I've seen our governor say. He sure doesn't "stand with" actually alive children who need a chance at life, health- or mental-health services, a viable path out of poverty, a path into widespread early-childhood education or adequately (or better yet, superbly) funded public schools.

And as state reporter Ashton Pittman reported in a stellar piece last week, the governor and his anti-abortion squad aren't doing mothers any favors, either. Pregnant women in Mississippi already die at higher rates than in most of the U.S., and the state is near the top in infant mortality.

Ashton also reported that the Mississippi Department of Health, or MSDH, released its annual report on maternal mortality in April, showing 22.1 maternal deaths per 100,000 live births from 2013 to 2016. Not to mention, Louisiana and Georgia, which passed their own near-total abortion bans recently, boast the highest maternal mortality rates in the country.

Although Bryant likes to hawk the myth to his white political supporters that abortion is "black genocide," mortality is significantly higher among black women in the state, at 51.9 deaths per 100,000 live births. What about those black lives, Phil?

But we get crickets from our governor on actual life-or-death issues for Mississippi women and "the born," as we can call our children. Once they leave the womb, they're on their own. I can just hear Republicans in the Legislature yelling at poor babies to "get a job!"—that's no more nonsensical than obsessing over a six-week "heartbeat" bill but not giving a damn what happens to a child they force into the world.

Plus, the (false) assumption that more affluent women in their circles won't face those problems post-birth couldn't be more obvious among these arrogant men. They clearly assume that quiet doctor's-office abortions will always be available to men and women of a certain stature. They also ignore the fact that desperate women—maybe a child who doesn't want to have her daddy's baby—will resort to dangerous back-alley-type procedures on themselves, as has always been the reality when abortions aren't safe and available to women.

Another tell is that they want contraception and real sex education that would continue lowering abortion rates off the table and out of schools. These dudes, many of whom sowed plenty of wild oats at Ole Miss, State or Southern or Millsaps College, now want to proclaim that women, at least, should wait until marriage to have a child, or many kids, and to avoid birth control.

They have no grip on reality. It's as if we're cattle they can prod along and control for their own purposes, political and otherwise. Don't forget, this battle over abortion is a new one since the 1960s; the political right adopted it to lure more votes for handing corporations anything they desire in exchange for their campaign dollars.

Abortion-rights activists and some Democratic leaders are unhappy with Mississippi's leading Democratic candidate for governor, state Attorney General Jim Hood, after his office filed a brief in defense of the state's new six-week abortion ban.

Mississippi Democratic men, however, don't get a pass. They have a long and recent history of kicking women's rights down the road and using us for their purposes without proper representation in their ranks, at their tables, or listening to our opinions and solutions.

It's a sick gradualism that runs women out of Mississippi and keeps others out — "shhhh on women's issues; we've got to solve racism and public education first," we're told.

Time's up, we must respond now. These games at women's expense must end. I certainly will not vote for or endorse anyone who plays them.

Our rights and equality are the sacrificial lambs as these Democratic men continue failing at their attempts to regain power from a Republican-controlled state. Guys, alienating the women who defeated Personhood here is not going to serve your goals. Stop selling out women. We see you.