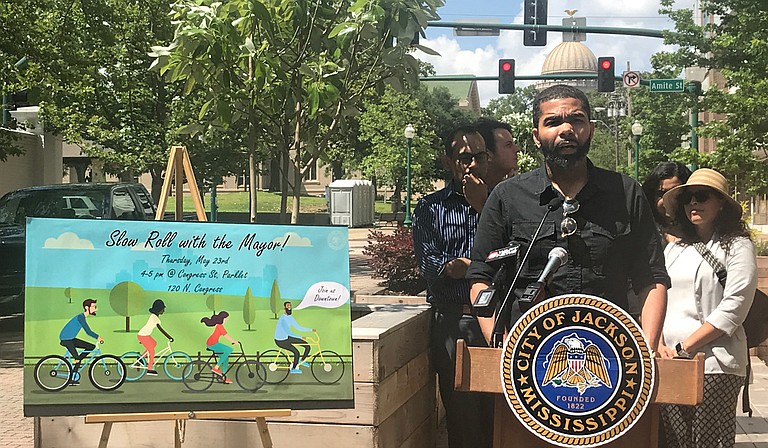 At a press conference on May 20, Mayor Chokwe Lumumba announced “Slow Roll with the Mayor!”, where residents will be able to take a bike ride with the mayor on Thursday, May 23. Photo by Aliyah Veal

Mayor Chokwe A. Lumumba pulled up outside the Congress Street Parklet in downtown Jackson dressed casually in a shirt, jeans and sunglasses. Beside his podium sat a bicycle rack and two bikes, one teal green and the other black. The occasion was the announcement of a new event, "Slow Roll with the Mayor!"

At the May 20 press conference, Lumumba said that during the ride, residents can ride their bikes with the mayor throughout downtown Jackson. The route for the event on Thursday, May 23, from 4 p.m. to 5 p.m. will start and end at the parklet on 120 N. Congress St.

"We recognize (that) to be a healthy vibrant city, we have to be healthier citizens," he said at the press conference.

Salam Rida, a long-range planner for the City of Jackson's Planning and Development Department, told the Jackson Free Press that multimodality could draw people to Jackson. She said since she started working for the city in February 2018, she has noticed that the transit system could use an update to the 20th century, as transit routes have not been updated for a long time.

"I think it's critical for us to think of options for people because everyone has a different preference," Rida said.

Rida, who is from Detroit, has owned a bike since she was in college. She rides her bike one to two times a week for health reasons and because she loves being able to see the city on a more human scale, she said.

"You meet people," she said. "You learn different things about the city that you wouldn't being in a car."

Mukesh Kumar, director of planning and development, said the City has placed bike racks and bike repair stations around downtown Jackson. One of those locations is right outside the parklet near Basil's and Keifer's restaurants.

Kumar said people in the United States have become too dependent on automobiles when their mobility needs actually vary. "We want to become a city that offers mobility as a service," Kumar said at the press conference.

Rida said multimodality improves the quality of life for a city, and she believes Jacksonians deserve that. "I think that in order for Jackson to be more multimodal, it needs to have a successful core where people will go and walk to," she said. "Putting bikes (and) bike racks is the first step."

Lumumba also announced at the press conference that he will plan a "Bike to Work Day" in the future.