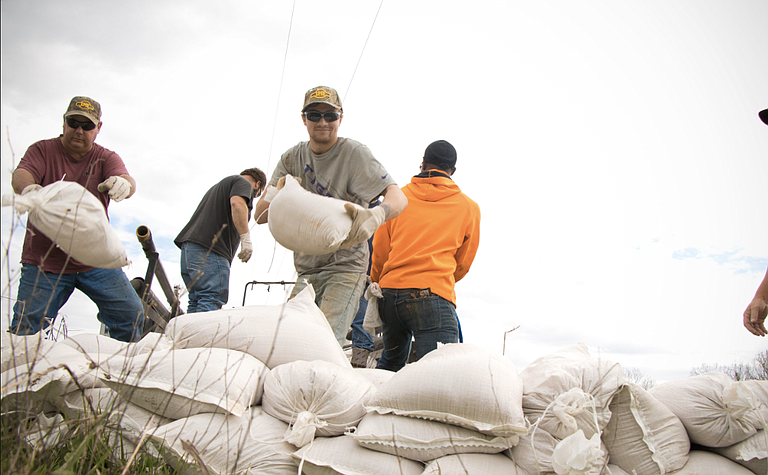 The U.S. Army Corps of Engineers (USACE) Vicksburg District began daily patrols of flood control works, such as levees, floodwalls, relief wells, pumping stations and reservoirs, Feb. 25 due to forecasted high water on the Mississippi River and its tributaries. Personnel from the Vicksburg District’s headquarters and its Vidalia, Louisiana, area office are deploying across the region to conduct inspection and surveillance operations on flood control works. At this time, the district has observed no significant sand boils or seepage at flood control sites. Photo by Jared Eastman

JACKSON, Miss. (AP) — Floodwaters overwhelmed a miles-long sandbag barrier over the weekend, drenching another community in the southern end of the Mississippi Delta.

Volunteers, prisoners and others had stacked 100,000 sandbags and more than 600 wire flood-control baskets, trying to keep water out of hundreds of homes at Eagle Lake, north of Vicksburg.

But water trapped inside a levee system keeps rising, as the U.S. Army Corps of Engineers keeps closed a floodgate that allows the water to drain. The closure prevents even worse flooding from the Mississippi River from spilling into the region. Flooding has been a problem in what's called the Yazoo backwater region for nearly three months, with the Mississippi at Vicksburg having remained at flood stage for the longest period since the storied flood of 1927.

"It wiped out all our sandbags," said Earl Wallace, chief of the Eagle Lake Volunteer Fire Department. "Before Saturday evening, we had saved every house up there with no water in them."

The lake is among multiple oxbow lakes along the lower Mississippi River that are lined with houses, a mix of permanent residences and weekend getaways. It's another casualty in a backwater flood that's the highest since 1973, before the Yazoo backwater levee was completed. The project was supposed to include a pumping station to lift water from the closed-in area and release it the Mississippi River, but the U.S. Environmental Protection Agency rejected the pump as harmful to wetlands inside the closed-in area. This year's flood has renewed the push for the pump, with supporters noting the flood will make it impossible for farmers to plant more than 200,000 acres (80,000 hectares) this summer.

"I hope the EPA is proud of themselves," Wallace said. "We can't battle Mother Nature and the EPA."

The sandbag levee began leaking worse than normal on Friday, Elfer said, but the real collapse came amid windy conditions on Saturday and Sunday, pushing waves that overwhelmed the sandbags.

"When you get this amount of water and this kind of pressure, it was just not feasible to barricade 5, 6, 7 miles," Elfer said.

The collapse led to some evacuations and rescues using boats and high-clearance trucks. Wallace said only five residents remain on the south side of the crescent-shaped lake, while about 100 remain on the north shore, which is partly protected by a levee. Elfer said Eagle Lake normally has about 300 full-time residents.

Wallace said he hasn't left the lake in months, saying he's the only medical responder in a location where land access has been increasingly cut off.

"I can't leave because they'll think I'm giving up and they'll give up," he said.