'Blood Was Spilled On These Grounds': JSU Remembers Gibbs and Green 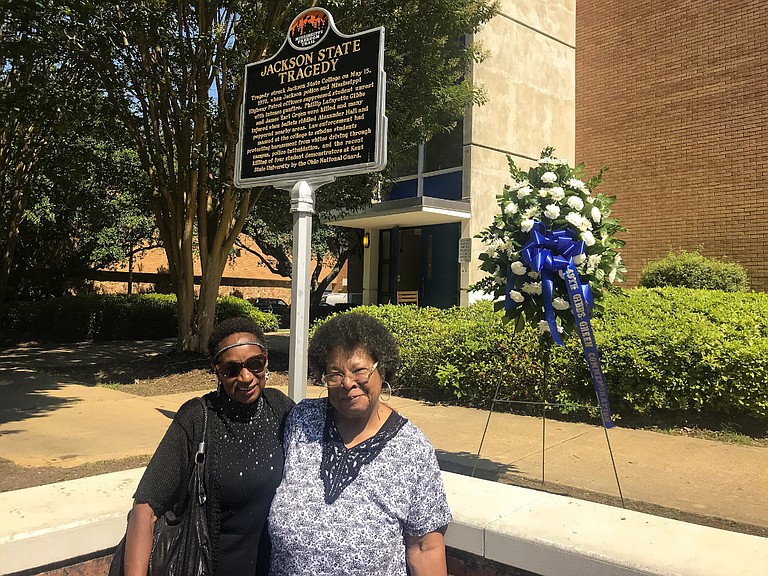 Gloria Green-McCray (right) and Mattie Hull (left) the sisters of James Earl Green, stand beside a marker and wreath outside Alexander Hall on the Jackson State University campus on May 15, 2019 - 49 years after city and state police opened fire on a group of youth, killing their brother and one other. Photo by Aliyah Veal

James Green was a comedian who always kept everybody laughing. He worked hours after school to help support his mother and eight siblings, and he talked about going to the University of California, Los Angeles, once he graduated from Jim Hill High School in Jackson.

"Out of all my mother's kids, she said he was the best child, as far as more disciplined, honorable," Gloria Green-McCray told the Jackson Free Press on Wednesday as she described who he was. "He was just a wonderful brother, wonderful son. They just don't make them like that anymore."

Unfortunately, Green never got to attend UCLA, or for that matter, graduate from high school, as a stray bullet cut his life short.

On May 14, 1970, city and state police surrounded a group of students outside Alexander Hall, a women's dormitory on the Jackson State University campus, after reports that some of them were pelting rocks at traffic and starting fires. Mississippi Highway Patrol cars joined 75 Jackson Police Department units. Tensions escalated, and just minutes after midnight, police advanced toward the dormitory building and opened fire, injuring 12 students and killing two others: James Green and Philip Gibbs.

Jackson State University hosted the 49th-annual memorial ceremony and wreath-laying on May 15, 2019, to commemorate the tragedy that took place outside of Alexander Hall. Community members, alumni and family members attended as JSU alumni from 1970, 1971 and 1972 placed a wreath beside a marker, which details the events of that fateful day, outside Alexander Hall.

Joanna Sanders Mann, a professor of English at Prairie View State University, said she remembers the incident as if it had taken place yesterday evening.

"I was a freshman at the time, and I was on that second floor in Alexander Hall on the night that it took place. And I was looking through the window as they lined up here," she told the Jackson Free Press on Wednesday.

She is in the process of working on a book about what happened. Returning to Alexander Hall brings mixed feelings, she said. "It's a trip down memory lane. Sad, but by the same token, my heart feels good in the sense that we have not forgotten," she said.

JSU students Ya'Mira Watts, a senior, and Peyton Bell, a sophomore, told the crowd they did not know about the shootings before they attended the university.

"I can truly say that as we walk this plaza, it reminds us of our strength and how we can never forget the tragedy that happened here," Bell told those gathered.

Jackson State students make up a small population of citizens who know and understand the event. Green-McCray said that what happened is a part of history and that her brother's story is just as important as Martin Luther King Jr.'s or Emmett Till's story.

"They need to know that when they're out here on this plaza, blood was spilled on these grounds," she told the Jackson Free Press on Wednesday. "If we don't teach, if we don't learn it, then they can't live it."