A New Class of Leadership 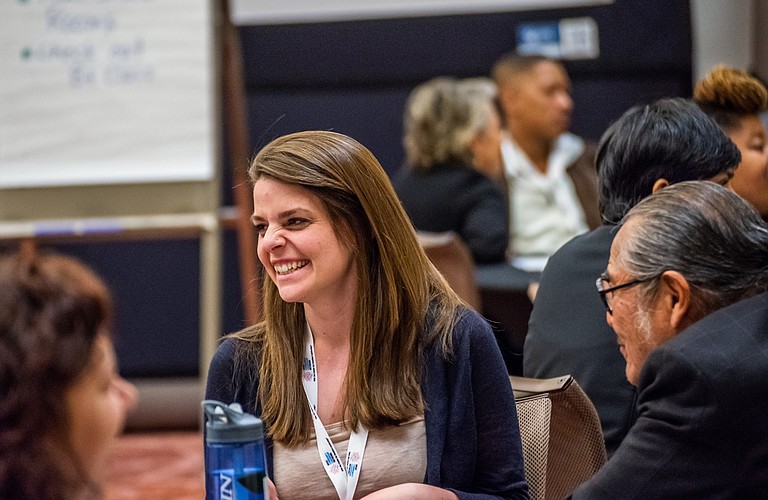 Sarah Stripp of Springboard to Opportunities in Jackson, is in the second WKKF Community Leadership Network. Photo by Alexander Woldeab

For M. Cade Smith, the assistant vice chancellor for community engagement at the University of Mississippi, his time in the WKKF Community Leadership Network program were three of the most productive years of personal and professional development, he says. He was in the first cohort from 2014 to 2017. "(I liked) connecting with incredibly motivated, talented and creative folks from all over the world that have a common feature of desiring to make the world a better place for all humanity," he says.

As of March 2019, the W.K. Kellogg Foundation has now begun its second class, and 17 of 80 new members are from Mississippi. The leadership program began in 2013 as a component of the Kellogg Foundation's commitment to community and civic engagement. It operates primarily in four places: Michigan, Mississippi, New Mexico and New Orleans. The foundation selected areas with high concentrations of poverty where children face significant barriers to success.

For the second cohort, 800 people applied for the 80 fellowships. The new fellows receive a $25,000 stipend.

The program began in March and is 18 months long. The entire group will meet five times (with the first in March), and several times in smaller groups organized in communities where Kellogg has a presence. Fellows also receive coaching from leadership experts and advice from leaders in their community. The capstone of the program is the development of a place-based project, where the community cohorts will work collectively to create change in local communities, the program's website says.

Donna Ladd, the editor-in-chief of this newspaper, was a member of the first class, developing the Mississippi Youth  Media Project as her place-based project.

The fellows undergo training based on Kellogg's "Truth, Racial Healing, and Transformation" program, which includes allowing fellows to talk about racism in structured dialogues where they practice listening with empathy.

"There was a big difference between philosophy, opinions and world views" among the members of the first cohort, Smith says. "There was a generosity in sharing those views, and in challenging each other to dig into the topic and explore it from different perspectives."

Sarah Stripp, a senior community specialist with the nonprofit Springboard to Opportunities in Jackson, is one of the youngest members of the upcoming class. "I am really excited about the chance to work with other people who have been doing this work for a long time, and can offer me some other perspectives and a broader view of what's going on."

The new Mississippi cohort includes seasoned veterans in the battle for social justice, including Zakiya Summers, director of communications and advocacy for the ACLU of Mississippi.

"I have been working all of my life on behalf of communities and in various areas like voting rights, civil rights, criminal-justice reform, and when I read the description of this program and how it was going to center on racial justice and equity, I knew I wanted to be a part of that," she says.