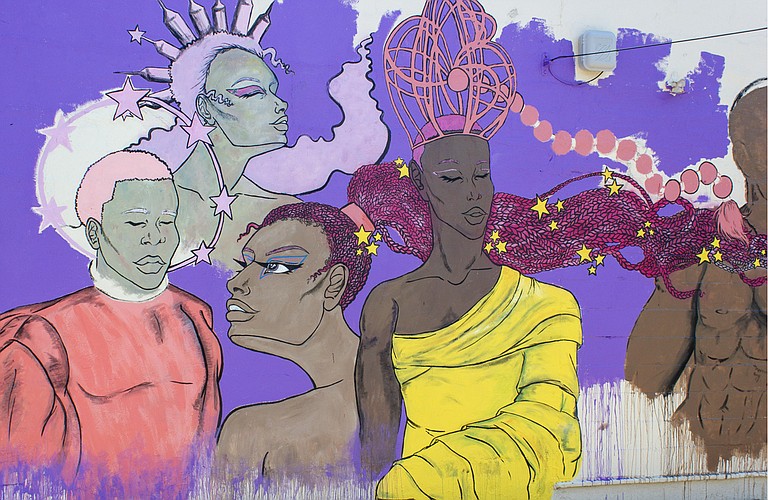 Standing to the side of a brightly colored mural off Monument Street on Saturday, April 25, Sabrina Howard shaded her eyes as a car pulled up. The man driving explained that he had to bring his brothers by to see how nice her mural was, as his passengers climbed out of the vehicle. He continued in enthusiastic conversation and praise for several minutes, while the others perused the wall. With one last handshake and a promise to return when her piece is complete, the men all then climbed back into the car and drove off.

"It's like that all the time out here," Howard said. "People come by and blow their horns, or stop and pose for pictures."

Krystal Jackson, also known as Krystal Gem, was one of the artists who participated in Cooperation Jackson’s Seven Days Community Arts Festival.

The mural is the brainchild of Cooperation Jackson. Shambe Jones, the organization's outreach coordinator, says Cooperation Jackson seeks to improve the economic situation of the black community in Jackson by creating methods for citizens to control their own means.

"The organization is working to create different co-ops which are worker/owner situations where you work there and you have a say on the way things are ran and also to find a way for co-ops to support each other," he says. "The whole idea is to be able to get resources that you are in control of—that you have the means, production and support to do."

The group hosted its first Seven Days Community Arts Festival from April 11-18, 2019. As part of the festivities, organizers commissioned 10 artists to paint murals around the themes of "Afrofuturism" and indigenous people in two west Jackson locations. The festival included a film festival, an all-day cookout for community residents and city tours for out-of-town guests. Jones says the choice to do murals created a space for local artists to display something unique.

"It's not new, but it is new to Jackson," Jones says. "Murals are not common here, and it's something that is growing, and so to do that and to get some of the local artists was a good thing to do."

The project showcases the artists with varying specialties. Some of their mediums include three-dimensional painting, graffiti, tattoo art, wood burning and graphic design. Their common thread is their link to Jackson and desire to restore pride to not only physical structures in the blighted area but in its people, too.

Justin Ransburg was one of the artists who participated in Cooperation Jackson’s Seven Days Community Arts Festival.

"I think (there) will be more people taking pride in their neighborhood and actually wanting to do something in that area to make it better," says Justin Ransburg, who contributed to the project.

Ransburg created two pieces of art for the mural. His first creation, "The Coming of Spring," features a young woman holding her hair, which becomes plants in her hands. He says it represents new life and growth.   His second piece, "A Song about Faith," depicts a woman reaching toward the sunlight with a cloud of smoke at her feet. In the piece, the sunlight symbolizes growth while the smoke represents negativity, he says.

Ransburg said that the response from the community has been overwhelmingly positive.

"A lot of people have come and brought us food, and water to help us stay hydrated," Ransburg said. "You can just feel the joy coming from people. It's one of those things where people become awestruck because they can't believe it's happening right in front of them, but they're also really happy that it's happening."

In addition to the mural at the intersection of Monument and Capitol streets, three artists, including Aundreyeah Ramsey, created another mural at the Community Production Cooperative a few blocks away on West Capitol Street.

Ramsey, a senior fine-arts major at Jackson State University, submitted a proposal to be included in the project after she saw a flyer at JSU's Johnson Hall.

"With (the topic) being black-oriented with African themes, I definitely wanted to be a part," Ramsey said. "I wanted to express how I felt about African history and black people as a whole."

Howard sees her mural as an opportunity to connect the past to the present. Her piece, "Ida B. Wells and Harriet Tubman," at the Monument Street location is a three-dimensional work that features the two ladies on the awning and building's side. The bottom of Tubman's dress features a family of cotton croppers and a map representing the Underground Railroad. The piece also displays a train, which Howard identifies as the link between the two women.

"Their link is in the railroad, the train and the journey," she said. "In Mississippi now, we are definitely on a journey. We're on the train. We're in a better seat, but we are still on a journey."

For Howard, the murals, and her piece in particular, are sparking needed conversation for the city and community. "I've had adults and children walk up to me and ask me, 'Who are you painting?'" she said. "I tell them Ida B. Wells. They ask, 'Who is that?' and it turns into a history lesson on who Ida. B. Wells is or what Harriet Tubman did. I think that is very powerful. Historical references are being made."

Those references reach beyond African American history. One piece, which Jones did, features  Native Americans.

"We are hoping to beautify this area and boost morale in an area which seems to be forgotten," Howard said. "We still have a large number of people who live in this community. These colors, these images, these themes are going to uplift the community and bring attention back to this area.