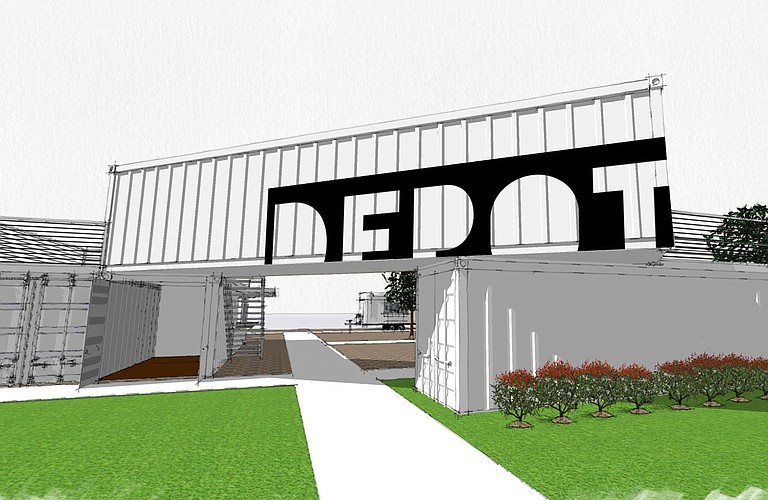 Something is always happening in Jackson, so each issue of BOOM updates you on some of the new developments in the Jackson metro area. Here are some of the recent ones.

Millsaps College's ELSEWorks  Entrepreneurship Program broke ground on Midtown Depot, an outdoor venue and cultural hub in Jackson's midtown neighborhood, on March 22. When completed, the 15,000-square-foot facility on the corner of Livingston and Wilson streets will feature a gourmet grilled-cheese  restaurant, craft beer on tap, lawn games, a stage, galleries for local art and more.

ELSE student analyst Russell Morrison first designed Midtown Depot as a sketch in 2012. ELSEWorks partnered with Midtown Partners, Inc., the Business Association of Midtown and the Midtown Neighborhood Association, and began formally planning the final design for the facility in 2017. Phil Hardwick, director of business analysts for ELSEWorks, told the Jackson Free Press that construction should be finished by October 2019.

Midtown Depot will consist of three large storage containers arranged around an open courtyard. One container will hold restrooms, another will contain the restaurant and bar, and the last will serve as gallery space for art donated from artists in the midtown community and students in the Millsaps art department.

"Midtown Depot is a project that will ultimately develop into whatever the community decides it wants," Hardwick said. "This will be a place where you can bring your dog or your children, enjoy a sandwich and a beer, or come to a barbecue cookoff. It's a venue that that's going to grow and evolve over time."

Jackson architectural firm Wier Boerner Allin and Sean Cupit, owner of Fondren Public and CrossFit 601 in Ridgeland, first announced their plans to renovate the building that once housed the Rainbow Co-op grocery store and turn it into a new fitness center called Fondren Fitness in December 2018. The business should open around June or July this year, Michael Boerner told the Jackson Free Press.

Rainbow closed in July 2018 after its board of directors declared bankruptcy. The new owners purchased the building on Oct. 19, 2018, and began renovations after obtaining a special-use permit from the City to zone the building for use as a fitness center in December 2018.

Fondren Fitness will be a multidisciplinary fitness facility that offers classes for all ages.

The facility will contain a large space that can split into multiple areas, locker rooms with showers and a smoothie shop that T'Keyah Williams, owner of Mama Nature's Juice Bar (655 Lake Harbour Drive, Suite 400, Ridgeland), will operate.

While the owners cancelled plans for two stories, Boerner told the Jackson Free Press that there have been no other changes to its planned facilities.

Boerner said he and the other owners are working together with the building's neighbors, Cups Espresso Cafe,  Montgomery Ace Hardware, Fondren Public and Hops & Habanas, to renovate the parking lot in front of the center, including repaving and installing new lighting. They have also replaced the building's roof and installed new downspouts to drain water as a means of addressing a persistent flooding problem in the space, which was one of the contributing factors to Rainbow closing.

Terry Sullivan, a Jackson native health-and-fitness trainer, has also signed on as  general manager for Fondren Fitness.  Sullivan will be in charge of supervising all of the other fitness trainers at the facility after it opens, Boerner says.

Jackson resident Samuel "Sam"  Tilahun partnered with Yosef Ali, owner of Aladdin Mediterranean Grill in Fondren, to open an Ethiopian restaurant called  Shiro Cafe & Restaurant (125 S. Congress St.) on the ground floor of Capital Towers in downtown Jackson on April 22. Tilahun renovated the interior of the space, which once housed Monroe's Donuts & Bakery from 2014 until it closed in 2018.

Shiro is open for both breakfast and lunch. For breakfast, the restaurant has  savory crepes including grilled chicken, and ham and egg with cheese, as well as sweet crepes such as jam, Nutella and banana, and apple delight with banana. The breakfast menu also includes ful medames, a Middle Eastern and African dish made with yogurt, eggs, fava beans and other ingredients.

For lunch, the restaurant offers a make-your-own-plate special for $10. Customers first choose a base such as rice, tortillas or teff bread, along with one protein and two sides. Proteins include tofu, grilled chicken, lamb or beef. Sides include beetroot or cabbage potatoes, spicy lentils, kale or collard greens, turmeric chickpeas and turmeric peas. Customers can also add an extra protein or an extra side for $2 each.

Construction began in September 2018, and Heritage President Chico Patel told the Jackson Free Press that the hotel should be open by Jan. 1, 2020.

Homewood Suites will include 4,000 square feet of retail space and 125 guest rooms with kitchenettes, separate living areas and work spaces with desks. The hotel will also have an indoor pool and a conference facility for meetings and events.

"Homewood Suites is a place that will cater especially to the medical crowd, including doctors and people who are on an extended stay while someone is in the hospital rather than just one overnight stay," Patel says.

"This will be the only hotel in the area with a kitchenette, which is good for an extended stay of more than two or three days."

Patel told the Jackson Free Press that Heritage is waiting until construction is finished to begin signing up tenants for the retail space. He also says that Heritage plans to hold a grand opening for the hotel in February 2020.

Jackson-based Mattiace Company recently completed a series of renovations on the Lamar Life Building in downtown Jackson to convert the building into a mixed-use residential and commercial space. The renovations began in March 2018.

Among the renovations to the 11-story building were the addition of 23 apartments on the seventh through 11th floors, as well as retail space and a restaurant on the ground floor. The remaining floors contain office space. Apartments range from 700 to 1,500 square feet in size and come in one- or two-bedroom models. Prices range from $800 to $1,700 per month, including utilities. Mattiace began leasing the apartments in January 2019.

The Lamar Life Building was built in 1924 and is both the oldest skyscraper and eighth tallest building overall in Jackson. It is also included on the National Register of Historic Places.

The International Museum of Muslim Cultures (201 E. Pascagoula St.) leased a space at 101 E. Capitol St., two blocks away from the museum, to house a new traveling exhibit titled "Muslims with Christians and Jews: An Exhibit of Covenants  and Coexistence."

Museum President Okolo Rashid told the Jackson Free Press that the museum leased the building due to a lack of space in the museum for the new exhibit. The 2,400-square-foot space is located next door to American Deli and formerly housed a clothing store.

The museum leased the building in December 2018 and began renovations in January 2019. IMMC will turn convert the building into a completely open space with an atrium, space for three exhibit galleries and a gift shop.

The W.K. Kellogg Foundation gave the museum a $600,000 grant in 2017 in the interest of promoting cross-racial healing, justice and human dignity, a release from IMMC states. Portions of the grant funded the "Covenants" exhibit as well as another exhibit titled "The Legacy of Timbuktu: Wonders of the Written Word."

The "Covenants" exhibit will be on display from June 28, 2019, through February 2020. Afterward, the exhibit will travel to Chicago, Dallas and Ft. Worth, Los Angeles, Detroit, New York City and Atlanta.

Urban Foxes on its Way

After months of making plans, Cody Cox has finally announced that small-batch bakery Urban Foxes will open in Belhaven Heights on May 20.

Cox acquired the building at 826 North St., which once housed the Belhaven YMCA, in  December 2018. They worked over the next few months, renovating the  building and getting it ready. On May 1, Cox announced on social media that  Urban Foxes would open on May 20.

The business will feature a selection of both sweet and savory pies, as well as scones, muffins, cookies and more, all handmade from scratch each day. Urban Foxes will also have a coffee menu that includes espresso, lattes, cappuccino and more, and a tea menu featuring organic loose-leaf teas. The shop will also stock beer from craft breweries.

Urban Foxes will be open Monday through Saturday from 7 a.m. to 8 p.m. For more information, follow Urban Foxes on Instagram.

CORRECTION: In the original version of this story, the Jackson Free Press said Terry Sullivan is the co-owner of fitness company liveRIGHTnow. That company is now closed. The JFP apologizes for this error.