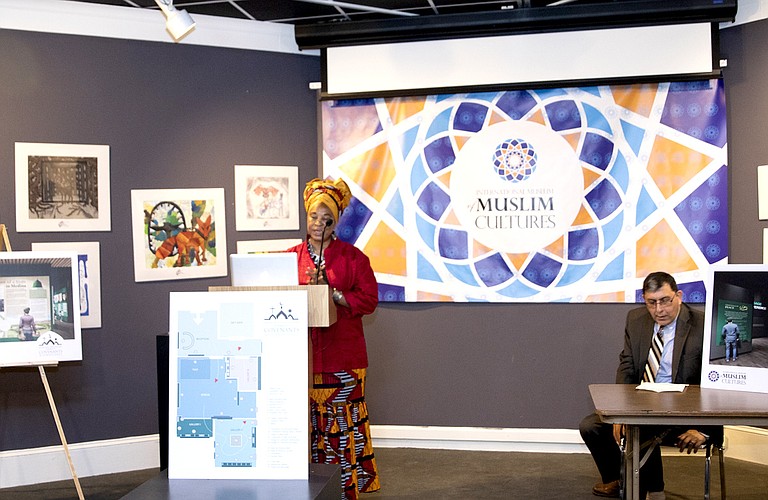 Okolo Rashid says the International Museum of Muslim Culture’s newest exhibit explores Muhammad, not just as a prophet but also as a head-of-state. Photo courtesy IMMC

It's quiet inside the International Museum of Muslim Cultures on a day in May, but a couple of blocks away, its noisier as IMMC renovates a space that will house a new exhibit.

On June 28, the museum will premiere its new exhibit, "Muslims with Christians & Jews: An Exhibition of Covenants and Coexistence," at the satellite location at 101 E. Capitol St.

"It's about the relationship that (the) prophet Muhammad established with Christians and Jews through the first constitution in history," says Okolo Rashid, the co-founder of IMMC, says about the exhibit.

Muhammad established the Medina Charter, or Constitution of Medina, in 622 A.D. to create the first multi-religious Islamic state in Medina, forging peace between the different tribes, including Jewish ones and some Christians in the area. Some scholars believe it was the first constitution ever created.

IMMC received a grant of $600,000 to get the exhibit together, Rashid says. It is an IMMC original and will be in Jackson until Feb. 28, 2020, when it will travel at first to just six cities in the U.S., including New York City, Chicago, Atlanta and Detroit. The goal is to build relationships in other institutions to send it more places, she says.

Besides talking about the Constitution of Medina, the exhibit also explores the connection between that constitution, and the Declaration of Independence and the Bill of Rights in the U.S. Constitution.

"Many of the principles, ideas that are in our Declaration of Independence, (and) in our constitution, the Bill of Rights, really, seemingly came out of the Islamic first constitution and the Quran," she says.

In the exhibit, a copy of the Medina Constitution and other covenants that Muhammad and leaders who came after him signed, as well as letters Muhammad wrote, will be on display.

An exhibit like this is important, Rashid says, because it explores that relationship instead of the conflict between the three religions.

"It is important for the religious community to have a better understanding of each other," she says.

It also disputes the perception that Christians and Jewish people don't have a connection to Islam, she says, and communicates the idea of religious pluralism, or a coexistence among different ones.

"To better understand Islam and some of these ideas that really are routed, you know in the Islamic religion, but also in the Islamic culture and this whole environment, and it is very much this whole idea is can Muslimhood, can Islam and the west coexist? and all those kinds of things. It really addresses those issues," Rashid says.

The exhibit gives equal attention to Muhammad as both a head-of-state and as a prophet, while its underlying theme, she says, is that Muhammad's movement was one for peace and freedom.

"Muslims with Christians & Jews: An Exhibition of Covenants and Coexistence" will be open from 10 a.m. to 5 p.m. Tuesday-Saturday and 1 p.m. to 5 p.m. on Sunday. For more information, visit muslimmuseum.org.