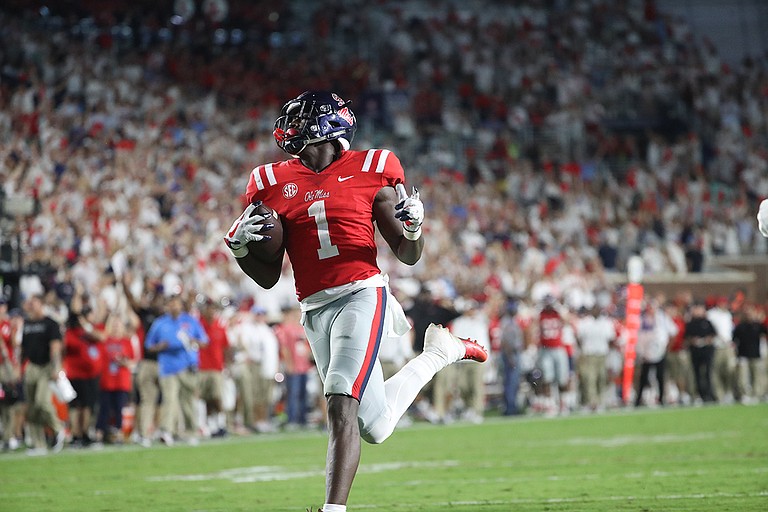 NASHVILLE, Tenn. (AP) — The Titans' top draft pick is busy with meetings out of sight from prying eyes as reporters got their one look at Tennessee's latest crop of rookies.

Luckily, A.J. Brown showed off his skills with a one-handed catch to make up for Jeffery Simmons' absence.

Brown turned toward the sideline Saturday and stretched out his right hand for the ball while managing to keep both feet in to complete the catch. Those hands and skills are why the Titans made Brown the No. 51 selection overall in the draft last month.

"I just try to catch everything you know," Brown said. "If it's out of reach, I just stick a hand up ... Not Odell (Beckham Jr.) or nothing like that."

The Titans will need as much as possible from Brown and their four other draft picks working in rookie minicamp this weekend with Simmons, the 19th pick overall, who is expected to be sidelined for much of this season after tearing his left ACL in February.

Simmons can be seen in photos the Titans shared on social media along with the rest of this year's draft class. But the 6-foot-4, 305-pound defensive tackle from Mississippi State didn't make an appearance Saturday, at least during the approximately 25 minutes reporters were allowed to watch.

"He can't do much on the field, but he's doing a lot of rehab and he's lifting and he's engaged in the meetings," coach Mike Vrabel said. "So when he's ready, we'll get him out there."

Having Simmons around also means head trainer Todd Toriscelli can work out a rehabilitation plan to help the lineman heal as quickly as possible.

But drafting Brown and also signing Adam Humphries away from Tampa Bay in free agency is expected to pay immediate dividends for an offense that ranked 29th in the NFL with 185.9 yards passing per game. The Titans also tied for 28th with only 16 TD passes, and they were last in the NFL for TDs covering 10 or more yards in the air (six).

Brown is the all-time leading receiver at Mississippi with 2,984 yards, and he also had 12 100-yard games and 19 TD receptions. He studies Jerry Rice, also a Mississippi native, and got the chance to connect with the Pro Football Hall of Fame receiver and run the infamous hill that Rice ran during his career.

He stayed after practice and worked on hand technique against defenders, too, so the receiver is as ready as possible when the rookies start working with veterans like quarterback Marcus Mariota later this month.

Linebacker D'Andre Walker, the Titans' fifth-round selection at No. 168 overall out of Georgia, got some personal one-on-one instruction from Vrabel. The coach wore a blocking pad on his chest and spent a few minutes discussing hand placement and where to strike when taking on a blocker.

Vrabel said Walker was able to stay focused, something he's noticed during meetings with position coaches. Walker acknowledged he isn't too familiar with Vrabel's background as a linebacker in the NFL, though he has heard from people around him.

NOTES: Vrabel had a little cut on the right side of his nose after working with players, though he couldn't remember when it happened. "That's the price of doing business," Vrabel said. "If I'm going to stick my nose in there, sometimes it gets busted up." ... The Titans had 31 players in this minicamp on a tryout basis.