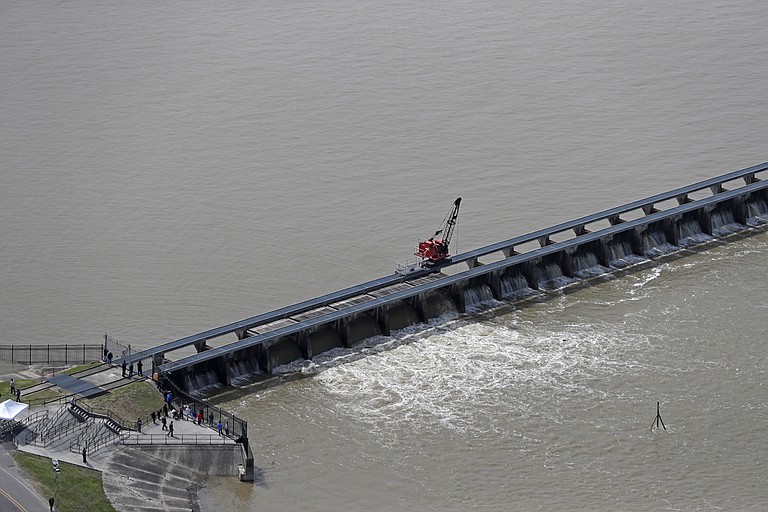 In this March 8, 2018 file photo workers open the gates of the Bonnet Carre spillway, a river diversion structure, which diverts water from the rising Mississippi River, left, to Lake Pontchartrain, in Norco, La. The Army Corps of Engineers’ New Orleans office is asking to open the historic flood control structure above New Orleans for the second time in one year. The National Weather Service says continued rains in the Midwest and Ohio Valley and floodwaters from the upper Mississippi River are heading down the Mississippi. File Photo by Gerald Herbert via AP

NEW ORLEANS (AP) — Army Corps of Engineers officials in Louisiana aim to open a historic flood control structure above New Orleans on Tuesday for an unprecedented second time in one year.

The request for authorization from the Corps' Mississippi Valley Division comes as floods across the Midwest have caused billions of dollars in damage to homes, farms and businesses.

Continued rains in the Midwest and Ohio Valley and floodwaters from the upper Mississippi River are heading down the Mississippi, National Weather Service hydrologist Jeffrey Graschel said. In addition, he noted, storms are expected to dump 5 to 10 inches (13 to 25 centimeters) of rain in parts of Louisiana and Arkansas.

The Bonnet Carré Spillway gets opened to relieve stress on New Orleans levees when the Mississippi flows at 1.25 million cubic feet (35,400 cubic meters) per second — fast enough to fill the Empire State Building in 30 seconds.

"The risks in not operating the spillway as it is designed ... would be potentially catastrophic," corps spokesman Ricky Boyett said.

The spillway, completed in 1931, is a 1.5-mile-long (2.4-kilometer-long) construction of 350 concrete bays and 7,000 huge timbers called needles. Its unusually early opening in February marked the 13th time it has been used overall, but only the second time it's been used in consecutive years. Earlier this year, 206 bays were opened, discharging 213,000 cubic feet (6,032 cubic meters) of water per second into the spillway.

"An average flood season is from March to May. This year has not been average at all," the New Orleans district's deputy commander, Maj. Jordon Davis, said Thursday.

The water is diverted along a 6-mile (9.7-kilometer) course of guide levees to brackish Lake Pontchartrain, after which it flows to the Mississippi Sound in the Gulf of Mexico.

Moby Solangi, director of the Institute for Marine Mammal Studies in Gulfport, Mississippi, said he's concerned about the spillway opening, because it means that polluted fresh water will flow into the Sound, a nursery for dolphins and endangered Kemp's ridley sea turtles.

More of those animals died in April than in any April over the past five years, he said, with 28 dolphins and 57 sea turtles found dead. Solangi said many of the dolphins had lesions on their bodies from exposure to fresh water, which also damages oyster reefs and blue crabs, on which the turtles feed, and plants that are food for animals lower on the food chain.

He said 73 dolphins and 79 sea turtles have died so far this year. That compares, for example, to 82 dolphin deaths in all of 2016, the highest annual total in the past five years. "We haven't even started the year and it's 73," he said.

Davis said the Corps has received "very inconclusive" reports about the deaths from the National Oceanic and Atmospheric Administration.

"The wildlife concern is very real," but the trigger point of 1.25 million cubic feet per second is set in law, he said.

Boyett said a 3- to 5-year hydrologic study of the Mississippi and other rivers in Louisiana began recently. "It will help us understand if we're doing it the right way," he said.

He also said opening the Bonnet Carré and the Morganza Spillway further upriver averted an estimated $250 billion in flood damages in 2011, about $170 billion of that in Louisiana.

Officials said they don't expect to open the Morganza Spillway this year.

Graschel said the lower Mississippi hit its first peak in March and never got down to normal. It could reach a seasonal norm until sometime in July if there isn't any additional significant rain in the Missouri and Ohio river areas, he said.