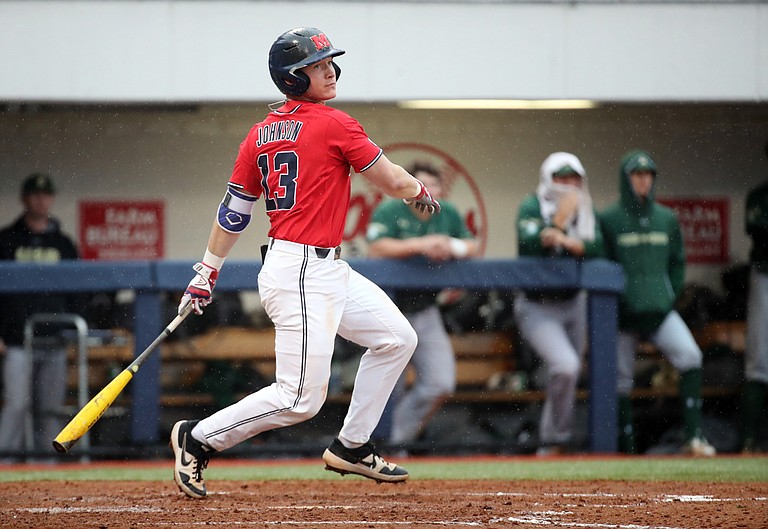 In a tight battle for in the SEC West, the University of Mississippi went to Baton Rouge needing to make some history. The Rebels have not taken a series from Louisiana State University away from home since 1982.

The opening game did not go well for the Rebels, as the Tigers put the game away with a four-run eighth inning for the 8-3 win. Junior catcher Cooper Johnson was one of the few bright spots for the Rebels, as he went two-for-four at the plate with an RBI, a run and a home run.

UM bounced back in the second game, taking down LSU 5-1 and evening the series. Johnson didn't record a hit, as he went zero-for-two at the plate, but earned a walk and scored a run in doing his part to help the team win.

Game three of the series turned into an offensive explosion between both teams. The Rebels survived for the series-clinching win after taking down the Tigers 19-15 in 10 innings.

Johnson exploded at the plate, going four-for-five at the dish with four RBI, four runs, a double and a walk. His walk at the start of the 10th inning turned into the game-winning run later in the inning. He set a new career-high in hits and runs scored, and was just one RBI shy of tying his career-high.

During the three-game series, Johnson went six-for-11 in batting, hit for .545 average, had a .643 on-base percentage as he scored six runs, and collected five RBI, a double and a home run. As one of the best defensive catchers in baseball, he held LSU to just one stolen base over the course of the weekend.

His efforts at the plate earned him SEC Player of the Week honors, as the Rebels won at LSU for the first time in 37 years. It is the first time in his career that he earned recognition from the conference for his play.

The series-win allowed the Rebels to keep pace in the SEC West. UM is tied for second with Mississippi State with a 15-9 conference record and two games behind West-leading University of Arkansas, which owns a 17-7 SEC record.

Johnson has played in 44 games with 41 game starts this season. He is batting .288 with 40 hits, 28 runs, 23 RBI, 19 walks, nine doubles and six home runs. The junior is three-for-four in stolen base attempts as well.

The Mundelein, Ill., native is enjoying his best season as a Rebel. As a sophomore last season, he only played in 26 games with 20 starts, with 19 coming at catcher and one as a designated hitter. Johnson hit for a .235 average with 11 RBI, 10 runs and two home runs.

Johnson and the Rebels prepare to host MSU this weekend in a pivotal battle in the SEC West. The in-state rivals will take part in a three-game series with game one on Friday, May 10, on the SECN+ at 6:30 p.m.

Game two of the series continues on Saturday, May 11, with a 6 p.m. start on the SECN+. Both teams will wrap up the series on Sunday, May 12, at noon with the game broadcast on ESPN2.

This series could decide second place in the West, and both teams have one series left afterwards. MSU plays last place in the SEC East, University of South Carolina, to close out the conference season. UM closes out SEC play against the University of Tennessee, which currently sits in fourth place in the East.