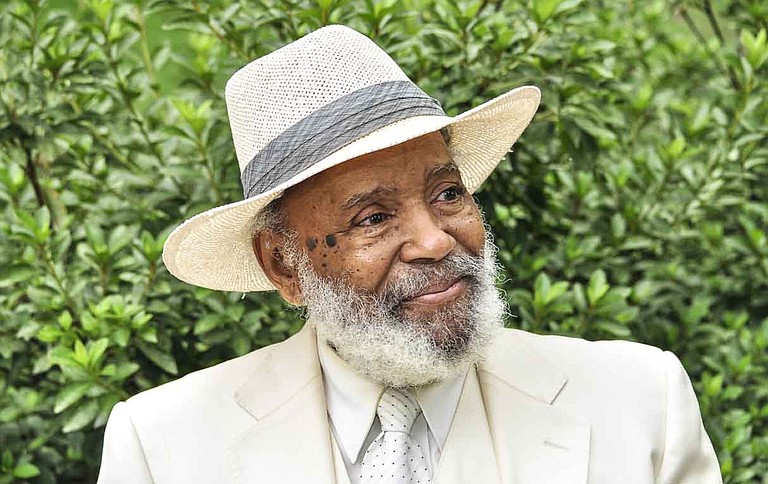 James Meredith, a Mississippi native civil-rights activist who became the first African American to attend the University of Mississippi in 1962, is conducting a tour of the Jackson Hinds Library System to raise awareness of the importance of public libraries in educating African Americans of all ages in Mississippi. Meredith has already visited eight of JHLS' 14 public libraries since April 10, and will visit each of the remaining ones throughout May.

Meredith was born in Kosciusko, Miss., and graduated from Gibbs High School in St. Petersburg, Fla., in 1951. He enlisted in the United States Air Force in 1951 and served until 1960. Meredith served in Kansas and Japan, and left the service as a sergeant. During his time in the Air Force, Meredith used on-base libraries to study for college.

"I know the only reason I was able to get into the University of Mississippi many years ago was because I enlisted in the military as soon as I turned 18," Meredith says. "The first base I was stationed on opened a one-room library, and from that day on I read newspapers and magazines, and kept up with everything going on in society, especially what was happening with blacks. Every public library collects these major publications. When you read those every day for 20 years, you'll know everything that's happening in society and the world, and it's all free."

Meredith first applied at UM in 1961, and the school rejected him twice on the basis of his race, despite the Brown v. Board of Education Supreme Court ruling in 1954 that outlawed segregation of public schools. On May 31, 1961, Meredith filed a lawsuit against the school in the U.S. District Court for the Southern District of Mississippi with the backing of the NAACP. After several appeals, the U.S. Supreme Court ruled in his favor by 1962.

The district court entered an injunction directing UM officials and members of the board of trustees to register Meredith on Sept. 13, 1962. Segregationist Gov. Ross Barnett and the state legislature attempted to bar him from enrolling by passing a law denying admission to anyone convicted of any felony offense, and accusing and convicting Meredith on false voter registration fraud charges on the same day. The federal government blocked enforcement of the act on Sept. 20, 1962. Barnett only relented after the federal government threatened him with civil contempt and possible arrest and after a series of phone calls from then-U.S. Attorney General Robert F. Kennedy.

Kennedy ordered 500 U.S. Marshals to accompany Meredith while he registered at the UM campus. On Sept. 30, 1962, a riot broke out, and a white mob attacked the gathered marshals. Two men died during the event, and the mob damaged university property. After the marshals stopped the riot, Meredith went to the campus and registered on Oct. 1, 1962.

Meredith graduated from UM with a bachelor's degree in political science on Aug. 18, 1963. After graduation, he traveled to Nigeria and studied political science at the University of Ibadan until he returned to the U.S. in 1965. He enrolled at Columbia University in New York City and earned a law degree in 1968.

After the passage of the federal Voting Rights Act of 1965, Meredith organized the March Against Fear beginning on June 6, 1966. Meredith invited other black men to join him on the 220-mile march from Memphis, Tenn., to Jackson, Miss., to encourage black Mississippians to overcome fear of violence and register to vote.

On the second day, a white man named Aubrey James Norvell shot Meredith as he was marching. After Meredith was hospitalized, other civil-rights leaders, including Martin Luther King Jr., continued the march in his place. Meredith recovered and rejoined the march on June 26, 1966, and entered Jackson with more than 15,000 other marchers. More than 4,000 African Americans in Mississippi registered to vote during the event.

Even with what he has already done, Meredith told the Jackson Free Press he believes promoting public libraries and education is still more important.

"This is more important to me than Ole Miss, the march and everything combined," Meredith says. "If we deal with public education, we not only make sure every child passes school, (but) we also foster learning for their parents ... Without studying and reading those newspapers, without constant use of the library system, I could never have done what I did."

During his library tour, Meredith will also discuss his 1966 memoir, "Three Years in Mississippi," which the University Press of Mississippi recently republished for the first time with an added introduction from historian Aram Goudsouzian. Each library on the tour will provide copies of the book for visitors. Meredith has written 27 books, including a second memoir titled "A Mission from God: A Memoir and Challenge for America."

"The other thing I'm promoting on this tour is putting the Bible and a children's dictionary in every home," Meredith says. "The truth of the matter is just about every effective form of education, particularly public education, that's had real impact with blacks has been led primarily by black Christian religious women. I also believe that any home with a children's dictionary will never have a child who fails a fourth grade literacy test."