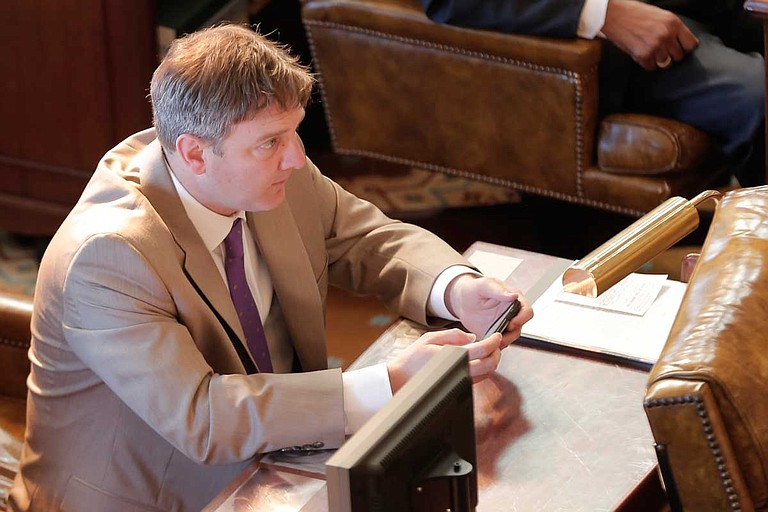 Mississippi State Sen. Joey Fillingane, R-Sumrall, introduced a bill in the Legislature this session that would have allowed parents to cite religious exemptions to opt their children out of mandatory vaccines. Photo by Imani Khayyam.

"The incubation period for developing measles from exposure to this traveler has passed. Any potential measles exposure would have developed symptoms by now," MSDH State Health Officer Thomas Dobbs said in a press statement on Friday. "We are grateful that, because of our strong immunization laws, Mississippians were protected from infection."

Measles still pose a threat to the state, Dobbs said, noting the nationwide outbreak of the disease that the U.S. declared eradicated nearly two decades ago. It's the worst outbreak in 25 years.

"This could easily happen again, so it is important that all Mississippians make sure that they are up to date on their measles vaccinations to avoid future risks," Dobbs said.

Still, MSDH has not identified a measles case in the state since 1992, and credits the fact that Mississippi has the strongest vaccine laws in the country, with more than 99% of children in the state vaccinated against measles, mumps and rubella.

Except for homeschoolers, Mississippi law bars unvaccinated children from attending any school, public or private. The law only allows exemptions "for medical reasons" that must be issued by "a duly licensed physician" in cases where a local health officer decides "such exemption will not cause undue risk to the community."

Only two states—Mississippi and West Virginia—do not offer religious exemptions. But a group of activists and some lawmakers want to change that.

MaryJo Perry serves as the president of Mississippi Parents for Vaccine Rights, an organization that courts state lawmakers in their search for allies to help introduce vaccine exemptions laws.

"I need the freedom to be able to follow the leading of my convictions. A fundamental part of being a Christian is being able to pray and follow God's lead," she told the Jackson Free Press on Monday morning.

Perry is Southern Baptist, and even though opposition to vaccines is not an official part of her church's doctrine, she believes she would qualify for a religious exemption because of her personal faith.

"So if I feel a check in my spirit that something is not right for my child, like going to the doctor and getting nine vaccines in one visit, which is ridiculous, then I should be able to follow that," she said.

Sen. Fillingane: Lack of Exemptions 'Puts Us Out of the Mainstream'

On Monday morning, Fillingane told the Jackson Free Press that he introduced the legislation because he does not believe it is the "government's role to tell every parent how to raise their child."

Fillingane, who is also an attorney with a Hattiesburg-based practice, said requiring vaccines for religious objectors could be a "possible" violation of the law, but that a parent would need to file a lawsuit to test it out in court.

He said he takes calls from parents who want the option to opt their children out of mandatory vaccines.

"They wonder, 'If they can be protected in Alabama and Tennessee and Texas and California, why can't they be protected with similar options here in Mississippi?'" he said. "So they ask for that."

The U.S. Centers for Disease Control has identified 764 measles cases so far in 2019—up from just 372 in 2018. Most this year originate in New York or New Jersey, which have religious-exemptions laws. The majority of people who got measles, the CDC reports, were unvaccinated.

Fillingane said he is aware of concerns amid the worst measles outbreak in decades.

"Obviously, there's this measles outbreak that's very concerning, and certainly I don't think anybody is advocating widespread exemptions be granted for a majority of children in the state of Mississippi from the MMR shots or anything like that," he said. "But I do think that, if Mississippi is now of one of only two states that have not seen fit to grant parents some type of exemption for either the health of their child or based on religious preferences, I think that puts us out of the mainstream, to be honest with you."

Perry said she would like to see legislators go beyond just allowing religious exemptions, allowing a "personal beliefs" exemption for parents who oppose vaccines for nonreligious reasons.

When asked, Fillingane said he, too, would support nonreligious exemptions.

'The Cornerstone of a Healthy Population'

"Mississippi has a long history of strong legislation leading to robust vaccination rates for our population. As a result, our state is thankfully missing from the hotspot map showing concentrated outbreaks around the country," said Darren Scoggin, a Jackson-based doctor and MMA member.

"Physicians appreciate Mississippi's effective vaccine laws," Mansour said in the May 6 statement. "I focus a lot on preventative health. Vaccines save millions of lives globally, and Mississippi's pre-school immunization laws protect our citizens."

In a statement to the Jackson Free Press on Monday, MSDH Communications Director Liz Sharlot said Mississippi is "very fortunate to have one of the nation's strictest immunization laws for school-age children."

"This legislation has been upheld for many years," she said. "The Mississippi State Department of Health operates on scientific, evidence-based knowledge to make or recommend a policy.

Immunizations are safe and effective and save lives. Due to Mississippi’s strong laws, we have not seen outbreaks like other states are currently experiencing."