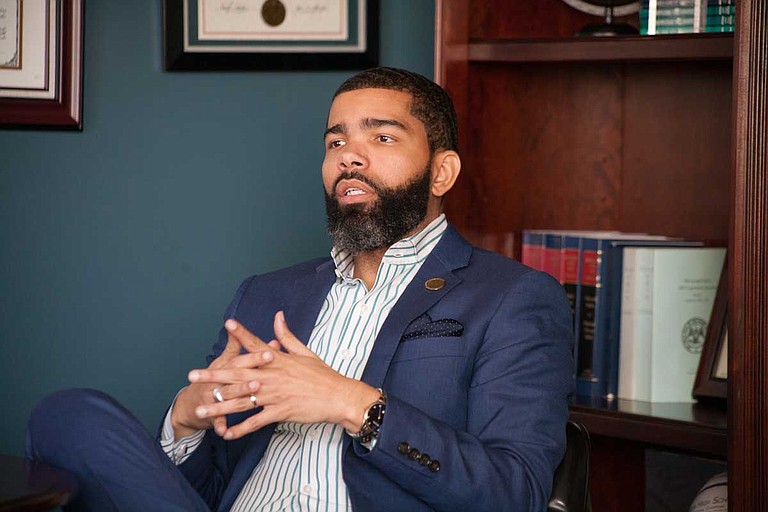 At a press conference at Westside Daycare on March 18, Mayor Chokwe A. Lumumba announced that the City is receiving funding from the W.K. Kellogg Foundation for pre-k pilot program Ready to Learn. Photo by Stephen Wilson.

JACKSON — Mayor Chokwe Lumumba announced on March 18 that the City will receive grant funds from the W.K. Kellogg Foundation for a pre-k pilot program. The program, dubbed Ready To Learn, seeks to ensure that every child in Jackson is well prepared to enter kindergarten by age 5, states the press release.

”One of the contributing factors to the school system are the equity concern across a district and the fact that every student is not equipped with the same resources," Lumumba said at the press conference. "Every student is not starting the process at the same level, the more we can do to address the issues of equity, the better we assist our children in preparing them—at an appropriate age— for their success.”

The W.K. Kellogg Foundation's website says the organization works with communities to create conditions for vulnerable children so that they can realize their full potential in school, work and life.

The foundation is awarding the city $1.2 million to support the initiative. The program will undergo a two-year development process, with the first year dedicated to building data and coalitions of early-childhood educators across the city. The second year will focus on implementing the pilot universal pre-k program at two early-childhood-development centers in Jackson.

The first year of the pilot program will be about learning and researching the number of opportunities there are for high-quality pre-k education. Chief Administrative Officer Robert Blaine wants to get the pre-k education community together to have a "robust conversation about what universal pre-k could look like in Jackson," he said at the press conference on March 18.

The second year will focus on the implementation of three strategies. The first is to look specifically at certified pre-k institutions and determine a universal level of quality. The second is to look at daycare facilities, and ensure they have the technical assistance needed to provide quality education.

"What we are looking forward to is being able to expand from the pilot phase to a full implementation across the entire city," Blaine said at a press conference.

Some studies show that participating in high-quality learning early in life can boost a child's educational level and earnings potential later in life.

"Children who participate in high-quality preschool programs have better health, social-emotional, and cognitive outcomes than those who do not participate," a report from the U.S. Department of Education says.

"We have recognized that one of the significant deficits in our children's ability to learn in Jackson Public Schools is that they are entering into the school system at different levels of preparation, and we need to assist our community in preparing our young people to start the learning process," Lumumba said at the press conference.

The study from the department of education from the department of education also found that, nationally, six out of 10 4-year-olds are not enrolled in publicly funded preschool programs, and that even fewer are enrolled in the highest quality programs. The report recognizes that preschool opportunities vary state to state, and are based on geography, race and income.

"One of the greatest enhancements that we can make to our educational system is to make sure that students enter kindergarten on grade level," Blaine said at the press conference. "If we can make this transition, it will both enhance what happens in our public schools and provide a foundation of educational success for all of our students."

Intern Reporter Natosha Pengarthit covers the City of Jackson and the Jackson City Council. Email her comments and story tips to [email protected] and follow her on Twitter at @nnpengarthit.