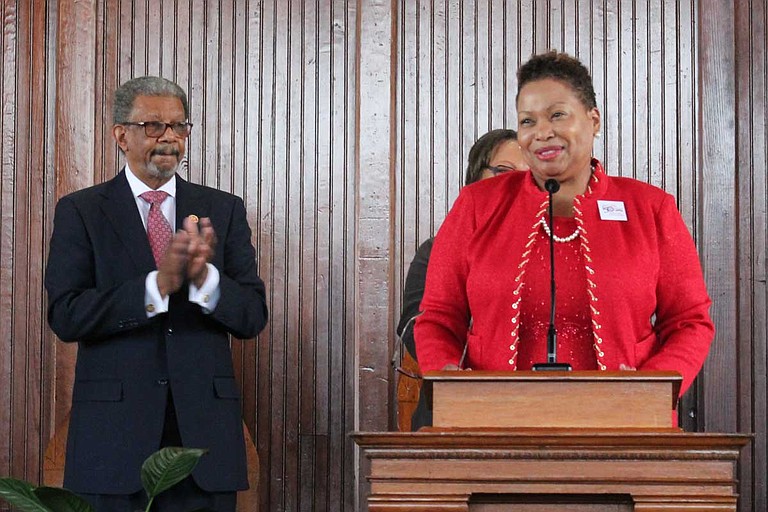 JACKSON — Tougaloo College's Woodworth Chapel began filling up as Beverly Wade Hogan walked up the stage to take her final seat as president on Monday, March 18. During the event, Tougaloo College Board of Trustees Chairman Wesley F. Prater named Carmen J. Walters as the 14th president of the institution.

Walters is the second woman president to serve the historic institution beginning June 30, with Hogan the first. Walters worked for more than 24 years in community-college education. She was executive vice president of enrollment management, student success and institutional relations for the past six years at Mississippi Gulf Coast Community College in Perkinston. She previously worked for 18 years at Delgado Community College in New Orleans.

The new Tougaloo president received a bachelor's in accounting and business administration from Southern (La.) University in 1984, a master's in postsecondary counseling from Xavier College in New Orleans in 1990 and her PhD in community college leadership from Mississippi State University.

The board of trustees began searching for a replacement after Hogan announced her retirement in October. She has been the president of Tougaloo College since May 2002.

"It's a time of change, and it's a time of opportunity," Hogan said in remarks to the students, faculty and Walters' family.

Tougaloo College's website says that it is a private, historically black college that sits on 500 acres of land on the northern edge of Jackson.

The college played a pivotal role in the Civil Rights Movement. Activists including Martin Luther King Jr., Angela Davis, Fannie Lou Hamer, Stokely Carmichael, the Freedom Riders and members of the NAACP typically met on the campus to strategize and organize.

The student body and faculty have high expectations for their new president.

"I'm honestly excited for new change at Tougaloo. I'm excited and hopeful that Dr. Walters will give 110 percent in trying to uphold the high standards of Tougaloo College," Jordan Williams, a senior at Tougaloo, told the Jackson Free Press.

"As the college celebrates its 150th anniversary and embraces what lies ahead in the new era of higher education, Walters brings a depth of executive-level leadership and knowledge in such vital areas as strategic planning in enrollment, facilities management, grant and budget management, workforce development, community and diversity relations and athletics management," Tougaloo says about its new president.

"I am excited to build on this legacy. ...This position is a dream come true for me," Walters said. "... It's a great challenge and opportunity for me to help preserve that wonderful history but also carry Tougaloo forward so that it's here another 150 years."

Intern Reporter Natosha Pengarthit covers the City of Jackson and the Jackson City Council. Email her comments and story tips to [email protected] and follow her on Twitter at @nnpengarthit.