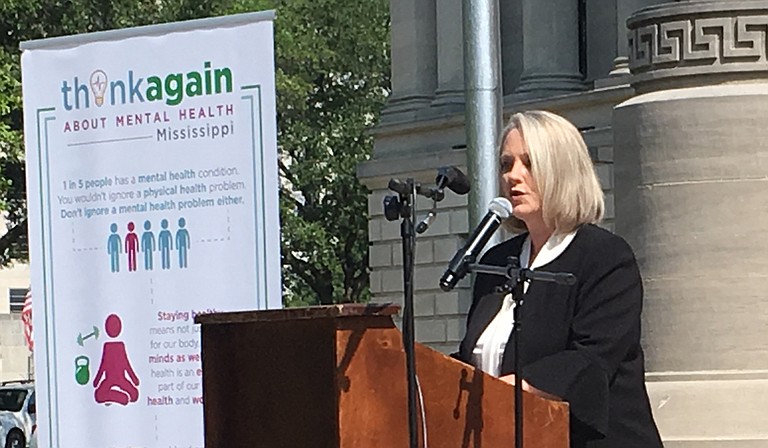 JACKSON, Miss. (AP) — The leader of Mississippi's Department of Mental Health testified Thursday that she supports spending more money on serving people outside state hospitals, as the state concluded its defense of a lawsuit where the federal government is asking a judge to order Mississippi to make changes.

Federal officials say Mississippi violates a 1999 U.S. Supreme Court decision finding "unjustified" confinement in a mental hospital is illegal. Mississippi officials say the state is making good progress on its own and that the federal government is making excessive and costly demands.

When asked about the biggest obstacle to expanding community treatment, the Clarion Ledger reported that Mikula responded "funding." Mikula said the state Legislature provided the department with a total of $16.1 million over a two-year period to expand community-based services. But she said the department's overall budget was cut by $8.3 million in 2017 and $19.7 million in 2018.

But U.S. District Judge Carlton Reeves, who has been hearing the lawsuit without a jury since June 4, questioned the speed of the transition. He noted that effective statewide community services appear to be years away.

"I think the philosophy of our agency has changed," Mikula said. "Our state hospitals understand they want to be the last resort for treatment."

"We just had no more money to shift (to community-based services)," Mikula said.

Mikula said over time she hopes to see a decrease in demand at state hospitals as community-based services increase. However, psychiatrists called by the state have testified that they evaluated that people admitted to one of Mississippi's four state hospitals need to be there.

"They are seriously mentally ill," an Alabama psychiatrist, Dr. William Wilkerson, testified on Wednesday. "The state hospitals are designed to take care of those persons."

Tommy Siler, a lawyer for the state, tried to get Reeves to accept testimony from Wilkerson about problems in Alabama after a state mental hospital closed there. Siler told Reeves that "you are going to be asked at some point by the federal government about closing inpatient hospital beds." Reeves ruled Wilkerson wasn't an expert in that field, though.

On cross-examination Thursday, Mikula admitted there wasn't a five-year plan to redistribute money away from state hospitals to community-based services. She said money would be used when available for community services.

For the current budget year, which ends Sunday, Mikula said $8 million in state funding was shifted from hospitals to community based programs. However, spending at Mississippi State Hospital at Whitfield remained level despite the shift, hospital Director James "Bo" Chastain testified Wednesday. The department spent other cash it had accumulated.

While cross-examining Chastain on Wednesday, Justice Department lawyer Matt Schutzer pointed out that Whitfield appeared to be making little progress on connecting exiting patients with community mental health care workers. Only 20% of people were visited by a community worker before they were discharged in 2016, a number that didn't change in 2017 despite a hospital goal to increase it. The Justice Department has repeatedly said Mississippi needs to improve discharge planning.

Kathy Crockett, the executive director of Hinds Behavioral Health Services, testified Wednesday that she began sending employees to Whitfield to meet with soon-to-be discharged patients as "a personal initiative."

Whitfield also referred fewer people to assertive community treatment programs in 2017 than in 2016.

Closing arguments in the case are set for Monday. Reeves is unlikely to rule for months.