The Hero and A Monster Debut ‘Always’ 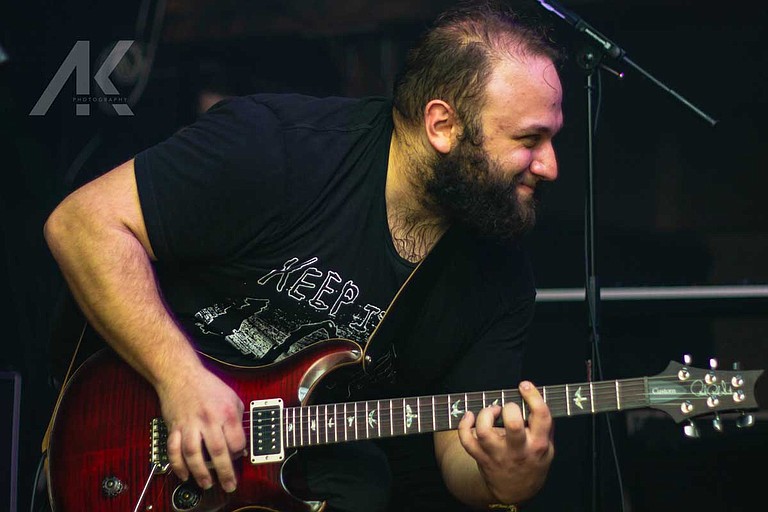 Tyler Holden (pictured) is the guitarist and lead vocalist for The Hero and A Monster. Ethan Mannon is the drummer and a vocalist. Photo courtesy Alden Kirkland Photography

One night after a The Hero and A Monster performance, an audience member asked band founder Tyler Holden, "Who's the hero and a monster?"

Holden told him that the hero is Jesus, and the monster is the struggles and personal demons people deal with every day.

The band is comprised of Holden, who serves as guitarist and lead vocalist, and Ethan Mannon, the group's drummer and supporting vocalist. The two use their music as a form of ministry.

Ethan Mannon (pictured) is the drummer and a vocalist for The Hero and A Monster. Tyler Holden is the guitarist and lead vocalist. Photo courtesy Alden Kirkland Photography

"We want to show the love of Christ to everybody," Mannon says. "No matter who you are, we just want to be  honest and open with people. We're not here to judge; we're just here to extend that hand and extend the love. I think that a lot of times that this world has enough hate in it and enough issues that me and  Tyler as Christians just want to care about people."

THAM's origins begin with Holden, who adopted "The Hero and A Monster" as his stage name when he began performing and  writing his own music in 2017. The 24-year-old Madison, Miss., native graduated from Madison Central High School in 2013 and enrolled at Holmes Community College for a year and a half before transferring to William Carey University, where he earned his bachelor's degree in contemporary  worship in 2019.

Holden used studio musicians to assist him while recording his music, including his first single "Saved?", which he released in 2017 as a solo artist.

Mannon, 24, was born in Southaven, Miss., and moved to Brookhaven, Miss., when he was 10 years old. He graduated from Brookhaven High School in 2013 and received his associate's degree in music education from Southwest Mississippi Community College in 2016. He attended William Carey University for a year, where he met Holden, and then transferred to the University of Southern Mississippi, where he is set to receive his bachelor's degree in entertainment industry audio production in December 2019.

After Mannon assisted Holden as a studio drummer, the artistic chemistry  between the two led to Mannon becoming an official member of the band in 2018. Now a  two-man unit, THAM continued recording original songs until they completed and released "Always," all while performing at venues local to the Jackson metro area.

In addition to alternate rock, the six-track EP features slower ballads as well as some songs that use components of soft metal. These elements are particularly prominent the band's most listened to song "Abort," which is not only the favorite song of both Holden and Mannon, but is also the most listened to song on the album, Spotify and Apple Music analytics show.

"I have so much experience with being a fan (of music) and working in the studio with other artists that I can see things about the songs that can really connect with people," Mannon says. "And I just had a feeling that ('Abort') was going to be a good one, and I'm glad to see that it was. But even if it wasn't, it still would've been a great one for me, but this all the more gave us a feeling that we're going in the right place when we made that call (to include 'Abort' on the EP)."

Mannon's other favorite song from the EP is "Show Me the Way." Holden's is "Come Alive," which he calls the "last solution of the album," as it is the final track and focuses on the idea of putting to death the sins and struggles in one's life and embracing "a better way."

"As a band, we have our roots in Christianity, but to say our music is Christian, we would say yes and no," Mannon says. "We don't want to alienate anybody from any  religion or anything like that. We believe our music is for everybody, from all walks of life. Anywhere you come from, we believe that our music has something for you to relate to."

The band is steadily working on creating new music and already has a few new  projects in the works in preparation for future releases.