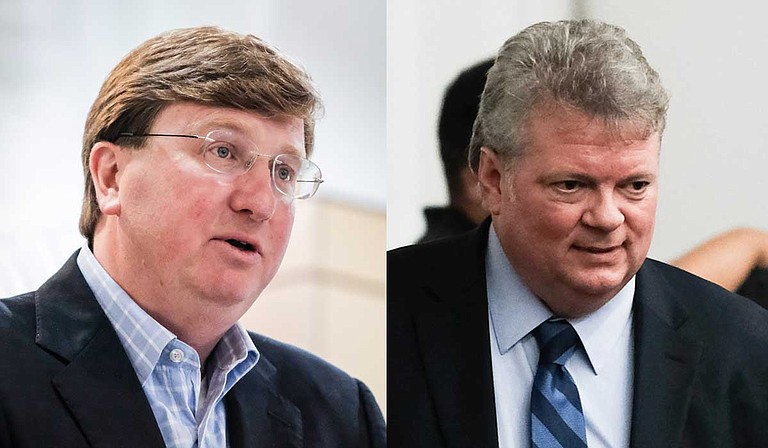 Republican Lt. Gov. Tate Reeves (left) continues to outraise and outspend all other candidates in the Mississippi governor's race, with Attorney General Jim Hood (right) raising and spending the most among Democrats in the race for the state's top job. Photo by Ashton Pittman

JACKSON, Miss. (AP) — In a story July 30 about campaign finance reports in the Mississippi governor's race, The Associated Press reported erroneously that Democrat Jim Hood has just over $902,000 cash on hand. The correct figure is $1.5 million, which includes money he had before this year.

A corrected version of the story is below:

JACKSON, Miss. (AP) — Republican Lt. Gov. Tate Reeves continues to outraise and outspend all other candidates in the Mississippi governor's race, with Attorney General Jim Hood raising and spending the most among Democrats in the race for the state's top job.

Candidates for several offices are speaking Wednesday and Thursday at the Neshoba County Fair outside Philadelphia. It's one of the biggest political gatherings of the year, with some campaigns bringing busloads of supporters to wave signs, cheer their own candidate and jeer the opponents.

Candidates who face primary opponents filed campaign finance reports Tuesday showing how much they have raised and spent this year. Those without primaries were not required to file reports.

Reeves reports raising about $5 million this year, and he has roughly that much cash remaining in his three campaign funds. The reports filed Tuesday show that Reeves collected more than $364,000 July 1-27, and his campaign transferred $1 million from one of his funds to another.

Waller, who's trying to force Reeves into a runoff for the party nomination, has raised $1.2 million this year and has spent $1.1 million. He reported $117,501 cash on hand.

If runoffs are needed in the primaries, they will be Aug. 27. The general election is Nov. 5.

The current governor, Republican Phil Bryant, could not seek a third term.