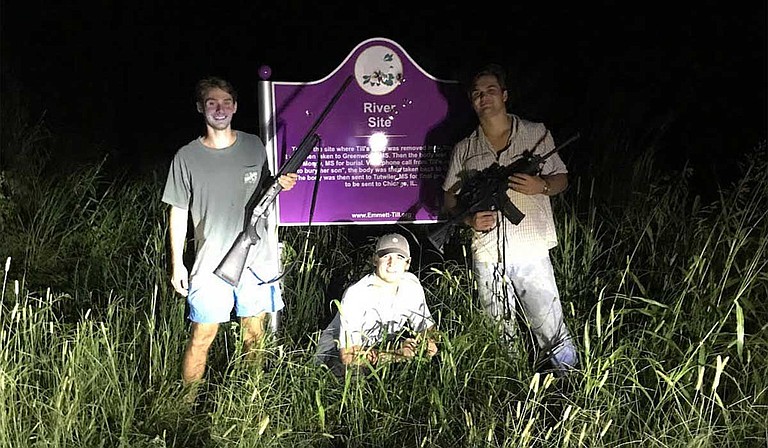 Three University of Mississippi students posed with rifles for a photo next to the bullet-riddled Emmett Till Marker in Tallahatchie County. They posted it on Instagram. Photo courtesy Instagram vis MCIR

When a trio of male students from the University of Mississippi posed with rifles next to a bullet-ridden Emmett Till memorial marker, they were representing an unfortunate truth about racism in the state, Mississippi Rep. Jeramey Anderson, D-Moss Point, believes.

The marker stands in Tallahatchie County, where two boys who were fishing at the Tallahatchie River found the 14-year-old Till's body in 1955. A white woman, who recanted years later, claimed he had whistled at her in a grocery store, and a group of white men, including her husband, murdered him, adding it in a magazine interview after a white jury acquitted him. Historians credit his death with helping boost the nationwide Civil Rights Movement.

Years later, though, the marker in his memory is replaced regularly because of bullet holes. ProPublica and the Mississippi Center for Investigative Reporting published the recent photo, which shows UM students Ben LeClere and John Lowe, though it is unclear whether they shot at it or if the bullet holes were already there when they posed for it. A third student holding an AR-15 remains unidentified, but the national Kappa Alpha Order fraternity has suspended all three. It is Nationally, the fraternity has a history of using racist imagery at its events.

"I am deeply saddened by the choice made by the three students to pose in such a thoughtless and disrespectful way at the Emmett Till historical marker," Mississippi Gov. Phil Bryant said, who annually declares April as Confederate Heritage Month, in a statement on July 27. "Mississippi has made significant strides toward racial reconciliation, and such despicable actions are not representative of the progress we have made."

"Looking at the governor's statement about the state moving forward and being progressive in this matter is not a representation of what the state is," Anderson told the Jackson Free Press on Monday. "The state absolutely has been on the back burner as it relates to these issues."

He pointed to Mississippi's public-education system, in which majority-black schools are consistently underfunded, often by thousands of dollars per pupil, than neighboring majority-white districts.

"We have minority communities still fighting just to have an equitable conversation as their white counterparts," Anderson said.

Bryant and other Mississippi leaders have had opportunities to "really make progress" and promote "racial reconciliation," Anderson said, but "we've failed to do so every single time."

He pointed to the state flag, which still bears the symbol of the Confederacy. Bryant and other Republicans in Mississippi have resisted efforts to change the flag.

"Looking at the governor's statement about the state moving forward and being progressive in this matter is not a representation of what the state is," Anderson told the Jackson Free Press on Monday. "The state absolutely has been on the back burner as it relates to these issues." Photo by Ashton Pittman

In a court filing, Jackson attorney Trey Jones wrote on behalf of Republican Mississippi House Speaker Philip Gunn and Secretary of State Delbert Hosemann that "racial animus" is "insufficient" to trigger a court decision overturning that provision of the state constitution.

"Even if plaintiffs' allegations that the challenged constitutional provisions were enacted with racial animus are true, those allegations are alone insufficient to establish a justiciable case or controversy to invoke the court's jurisdiction," the attorney wrote.

That filing, Anderson told the Jackson Free Press, proves that top Mississippi Republican leaders are not serious about racial progress.

"We're talking about moving towards racial reconciliation and trying to mend those differences," Anderson said. "And when you see articles like the one I tweeted, (in which) we still have high-ranking state officials who say there's no need to change this? When we know that these laws have prevented us from moving in the direction the government claims we've already headed? You're almost painting a false picture of what's going on in Mississippi, and it's not at all the truth."

Like the students at UM, Reeves was a member of Kappa Alpha Order when he was a student at Millsaps College in the 1990s. In February, the Jackson Free Press reported that photos from Millsaps yearbooks when Reeves was a student showed his fraternity wearing blackface and other offensive costumes. College newspapers from the time also show photos of Kappa Alpha Order wearing blackface.

The fraternity's pages in the 1993 through 1996 editions of Millsaps' yearbooks show him pictured among its members. Their pages also show unidentified members in racist costumes. Reeves says he is not in any of those photos.

One photo shows three Kappa Alphas wearing blackface, with one smoking a cigar. Another shows members dressed in drag, with one wearing an afro wig. One from a luau party shows shirtless members in blackface, wearing afro wigs and evoking "savage" imagery.

In another photo, a member of Kappa Alpha has dark paint on his face with the Confederate 'X' crisscrossing between his eyes. It is not clear if the student in the black and white photo wore black face paint or dark blue.

In Reeves' freshman year, an ad for the fraternity in the Nov. 10, 1993, issue of the Purple and White newspaper included a 1966 photo in which new recruits received invitations from what appears to be a child dressed in a mammy uniform, similar to that of a slave-era housemaid.

The yearbooks list a "Black and White Party" as a social event the fraternity engaged in, along with the Old South Ball. Yearbook photos show pictures from the ball during Reeves' time, with the fraternity's all-white men wearing garb akin to that of Confederate soldiers and their dates dressed as southern belles.

While Reeves was in Millsaps' chapter of Kappa Alpha, the fraternity had a reputation for racist incidents. In 1994, the school newspaper reported an altercation between members of Kappa Alpha and some black students in which members of Reeves' fraternity called them the n-word.

After the incident, the black students targeted with the epithets were talking to WLBT about what happened when members from another fraternity, Kappa Sigma, showed up and told one of them to "engage in oral sex with his 'white genitals.'"

In a 1994 op-ed, author Kiese Laymon, one of the students whom the epithet was directed at, sarcastically suggested that while Kappa Alpha was the most obvious manifestation of racism on campus, institutional racism persisted throughout Millsaps.

"At Millsaps, I know we've overcome racism, and if the word 'n—ger' is ever muttered, it could only be echoed in the walls of the Kappa Alpha House," he wrote.

Laymon wrote about his experiences as a black man in Jackson in the 1990s in his book of essays, "How to Slowly Kill Yourself and Others in America".

At the time of the JFP report, Reeves' communications director, Laura Hipp, did not address the instances of blackface but did address the Confederate parties.

"Like every other college student, he did attend costume formals and other parties, and across America, Kappa Alpha's costume formal is traditionally called Old South in honor of the Civil War veteran who founded the fraternity in the 1800s," she wrote in a press statement.

In a statement in February, Millsaps College Executive Council told the Jackson Free Press that Kappa Alpha Order had "adopted new regulations in 2015 that forbid any function 'with the name Old South or functions with any similar name.'" That directive, the college said, was "implemented and supported" by the college.

Shortly after the Jackson Free Press report, other news outlets reported on a photo from a party in the early 1980s in which members of Hood's fraternity, Pi Kappa Alpha, at the University of Mississippi appear with their bodies and faces painted black. White markings on the men's faces appear to mimic African tribal face paint.

Hood is not listed among the members on the Pi Kappa Alpha page where the photo appears in the 1983 yearbook.

"I saw the picture that they put in the paper," the Democratic candidate for governor said at a Feb. 11 press event. "I thought it was a KISS concert where they had their faces and bodies painted."

Hood said he did not know what the party was, or if he was even still at UM at the time the photo was taken, but said he is not in it. In fall 1983, he took a job in the oil and gas industry and was not a student at UM. He never would have painted his face regardless, he said.

"When I go hunting, I don't even like to wear a mask," Hood said.

Hood said voters should judge politicians by their records in office. He pointed to his prosecution of Ku Klux Klansman Edgar Ray Killen, who helped orchestrate the murder of three civil-rights workers in Philadelphia, Miss., in 1964. He also pointed to Lt. Gov. Tate Reeves, who spoke to the Sons of Confederate Veterans in front of a giant Confederate flag in 2013.

At a town hall in Hattiesburg months later, though, a local African American woman challenged Hood, accusing him of being "racially tone deaf" for making a joke about hunting when asked about his fraternity.

"Blackface is a mockery and dehumanizing toward black people, and ... the only thing you have to say is, it's smothering you?" the woman, Anastassia Doctor, told the Jackson Free Press about Hood's response after the event.

Democratic and Republican candidates in other races face off that day, too, including candidates in the races for lieutenant governor, attorney general, treasurer, State House and Senate seats, and more. Those races could also go to a runoff on Aug. 27. After voters decide, nominees from both parties will face off in the general election on Nov. 5.

Mississippians must register at least a month before an election in order to be eligible to vote, and must show an accepted form of photo ID at the voting booth, a list of which is available on the Secretary of State website. County circuit clerks across the state offer all residents free photo IDs that they can use to vote.