Hood Calls Tech, Women's Opportunities 'The Hope for Our Future' 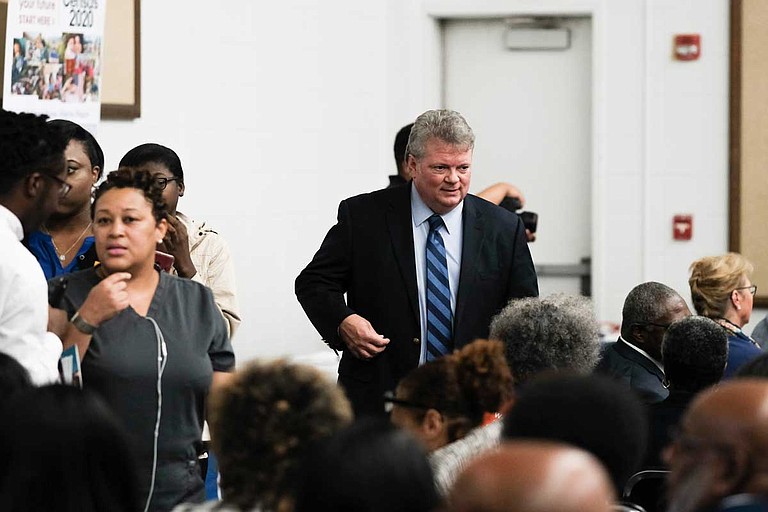 Mississippi Attorney General Jim Hood, a Democratic candidate for governor, spoke at the Women for Progress forum in Jackson on July 23, 2019. Photo by Ashton Pittman

JACKSON—The small town of Houston, Miss., has struggled in recent years. The only emergency room in the area closed in 2014, and the poverty rate remains higher than in the rest of the state.

Mississippi Attorney General Jim Hood said at a Democratic candidates forum earlier this week that the prognosis is grim for his hometown and similar municipalities unless leaders take steps to bring all parts of the state into the 21st century when it comes to technology education and infrastructure.

“That is the hope for our future,” Hood told the Women for Progress Political Candidate Forum at the Art Center of Mississippi in Jackson on July 23. “In two-lane roads like the town I’m from, the only hope we have is for technology. And that’s through our young people developing apps and technologies that can make a difference in our lives.”

Mississippi Lags Behind in Broadband

Right now, though, just over 30% of the state does not have access to high-speed broadband service at all and remains limited to relying on slower options, like dial-up, to connect to the internet. It's worse in rural areas and small towns.

Boosting technology-based prospects for rural towns will require leaders to "take broadband across our state," Hood said at Tuesday's forum. "It'll be a huge effort to make that happen so that we can develop technology jobs in our state."

He did not propose a specific plan for implementing it.

In January, Gov. Phil Bryant signed the Mississippi Broadband Enabling Act, which the Legislature passed on an overwhelmingly bipartisan basis. The law's backers say it will increase broadband access in rural areas by allowing the state's 25 electric cooperatives to offer high-speed internet to their customers.

Results could be years away, though, critics say, and the law is unlikely to guarantee high-speed broadband to all customers. Cooperatives are not required to offer the service, and it could be expensive to implement without the assistance of federal grants.

At Jones College in Ellisville earlier this month, Lt. Gov. Tate Reeves, the top Republican vying for his party's nomination for governor, unveiled a $100-million proposal aimed at boosting career-training programs in K-12 schools and community colleges. He said it would include $1.5 million to bring computer-science and software-development classes to K-12 schools.

More Opportunities for Women and Minorities

At the Women for Progress Forum on Tuesday, Hood also promised to grow small businesses in the state with tax cuts, while taking a thinly veiled swipe at Reeves for the $260-million-a-year corporate-franchise tax cut, which benefits out-of-state corporations. Reeves pushed that cut through the Senate in 2016.

"And so I think we can do that through our agreements through the MDA (Mississippi Development Authority) and make a difference in the lives of so many women that work tough jobs every day and that they can have their own businesses to start, particularly in the area of technology. That is the hope for our future."

One of Reeves' opponents in the GOP race, Mississippi House Rep. Robert Foster of DeSoto County, has been pushing for more vocational training as a centerpiece of his campaign since he announced last December. He talked to the Jackson Free Press about his ideas in an interview in January, saying he supported adding more computer-science and software-coding classes to K-12 schools.

"We've got to instill skills like that with career-tech and vo-tech. I'm for putting it even in earlier stages before high school," Foster said. "It's a necessity to transforming education."

Democratic and Republican candidates in other races face off that day, too, including candidates in the races for lieutenant governor, attorney general, treasurer, State House and Senate seats, and more. Those races could also go to a runoff on Aug. 27. After voters decide, nominees from both parties will face off in the general election on Nov. 5.