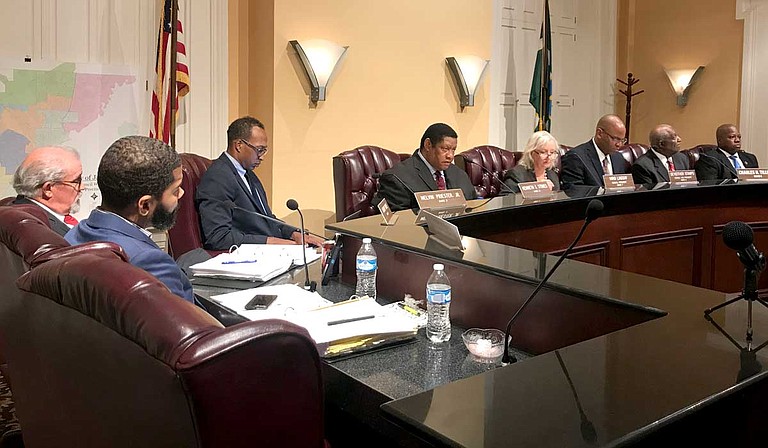 Jackson City Council members look at data and maps about the Kellogg Grant at the July 23 city council meeting. Photo by Aliyah Veal

At the July 23 Jackson City Council meeting, Chief Administrative Officer Robert Blaine gave an overview of the $3.1-million grant the W.K. Kellogg Foundation awarded to the City of Jackson. The grant will fund the "Economic Pathways to Human Dignity: Building Occupational Opportunities & Economic Growth,: which focuses on building occupational opportunities and a program focused on vulnerable children, Blaine said.

"When we were looking at this program, the first thing we started to look at was early-childhood education preparation," Blaine told the council.

Blaine presented his findings in two maps. The first showed areas where children are entering kindergarten poorly equipped for the learning environment.

"What we started to see was early-childhood preparation for school is one of the greatest factors for determining success in the educational environment," he said.

"The strategy of pathways to human dignity focuses on vulnerable children and their parents. This is a two-generation strategy," Blaine said.

He said that the focus of part one of the two-generation strategy is called "Ready to Learn," with the goal that every child in Jackson enters kindergarten ready for the learning environment. Kellogg awarded the City $1.2 million for a pilot universal pre-K program, Blaine said.

Blaine added that the City will also look at home-educated students to provide education centers that will provide curriculum for children and training for the home child-care provider. The second part of the two-generation strategy focuses on parents of vulnerable children. Kellogg awarded the city $1.9 million for this section of the grant, Blaine said.

Blaine said the City has also entered international partnerships, specifically with Social Progress Imperative, which built distribution maps of the density of occupational opportunities in Jackson.

"These are all the tools we are using together in order to be able to create a positive experience for economic mobility for folks below the poverty level in our community," he said.

Following Blaine's presentation, city council members had questions about the project. Ward 3 Councilman Kenneth Stokes was concerned that the Mary C. Jones Community Center, which functions as a school and a community center, would close.

"Early childhood is the bread and butter, but the community still tries to use it as a center," Stokes said. "My concern is that Mary C. Jones will not make it if we remove early childhood."

Mayor Chokwe A. Lumumba told Stokes he is not familiar with the idea of closing Mary C. Jones, but he is aware of the concerns about the building.

"We could not apply, for instance, towards this grant for those repairs that we need. We're trying to have a more robust element to the education of our children. Closing that facility would not be consistent with that goal," Lumumba told Stokes.

While Ward 4 Councilman De'Keither Stamps was concerned about the sustainability of the project and how the city could use it to pay city employees better, Ward 6 Councilman Aaron Banks was curious about where the project's focus would be.

Blaine said the focus of this grant is west Jackson and south Jackson because those are the areas with the most challenging opportunities for children to enter kindergarten ready to learn.

"The professional development that our employees receive will be used in order to be able to facilitate the growth in daycare centers and to make sure that there is curriculum that is offered that will align with what is happening with the state, JPS and national levels of certification. The focus of our work is that our employees gain the advantage of being the facilitators of this work," Blaine answered.

Blaine added that since he and Adraine Dorsey-Kidd wrote the grant, JPS has unveiled its strategic plan, which Superintendent Errick Greene announced at a press conference on July 18 [ LINK: http://www.jacksonfreepress.com/news/2019/jul/19/jps-unveils-transformational-plan-public-schools/ ].

"Their first commitment in their strategic plan is universal pre-K. They understand the importance of this work and have come to us as a partner," he said. "As soon as we started talking with JPS, the United Way came to us and said that they already have a network of all the early childhood institutions in the city, and they want to be a partner."

Blaine said there are not enough spaces to enroll students in the city to make sure children have the opportunity to enter kindergarten ready for the learning environment, underscoring the importance of this project.

Council members voted 5-2 in hiring David Bickham as a futurist for the project; Ladan Menteghi as a staff member; and Justin Edwards in developing the project's data ecosystem. They also voted 6-1 to hire Lacey Loftin Consulting LLC for data science in the project.

Council remembers honored Jigga Mississippi with a resolution for outstanding young people whose path today leads to broadened horizons. The council gave certificates to each member of the dance group.

Emon Pew, 15, said he founded Jigga Mississippi, a dance group, on June 9, 2018, with the goal of giving young teenagers something to do. The dance group is comprised of 24 young men and women from Jackson and surrounding communities, and his motto is, "don't shoot it up; dance it up," he said.

"These young teenagers enjoy what they do to help the lives of others," Pew said.

Taylor Akharume, vice president of Jigga Mississippi, said people cannot make mistakes these days, especially people of color. You can make one mistake, you're in jail, and your life is over, she said.

"As young people, we've realized that at a young age. So what we're going to do is keep moving forward and keep going stronger to get these young kids off of the streets," she said.

The council also honored Calvin Lockett, a Jackson Public Schools administrator, with a resolution upon his retirement after 32 years of service.

"It's been an honor to serve the children," Lockett said. "I hope I gave more life service than lip service. At this time, I'm gone take my seat as a citizen, and I'm gone watch this city and this school district flourish."

Mayor Lumumba announced at a press conference on Monday, July 22, that the City of Jackson has received the AARP Community Challenge Grant for the second year in a row. Jackson joins nearly 159 other cities across the country who are dedicated to creating communities that contribute to the quality of residents of all ages, Lumumba said at the press conference.

"We'd like to express our gratitude for AARP once again for extending this opportunity to the city of Jackson to be named one of America's livable communities," he said.

At the press conference, Jordan Hillman, deputy of planning and development, said the first grant AARP awarded the City went to building the parklet on Congress Street, which she said has stemmed great conversation about how public space is used locally. This year's grant is $20,000, and the City will focus on making the eastern side of Smith Park more "dynamic and pedestrian friendly," she said.

"Our in-house urban-design team, as part of our long-range planning team, is currently developing plans for this project. The project will include traffic calming measures, art, outdoor furniture and shade structures," Hillman said.

"We appreciate Mayor Lumumba and the City of Jackson for all the work that they've done to make this city more livable and enjoyable for the 50-plus population and all of their families," Campbell said.

Lumumba said at a press conference that the parklet has become a space that the city is proud of, and he believes the administration will put the new grant to good use.

"We want our city to be welcoming and open to everyone. We're truly excited about this," he said.

Hillman said the City will celebrate the completion of the grant with its second annual Parking Day event on Sept. 20. The holiday is part of a national event that encourages cities to rethink their public spaces, especially parking areas.