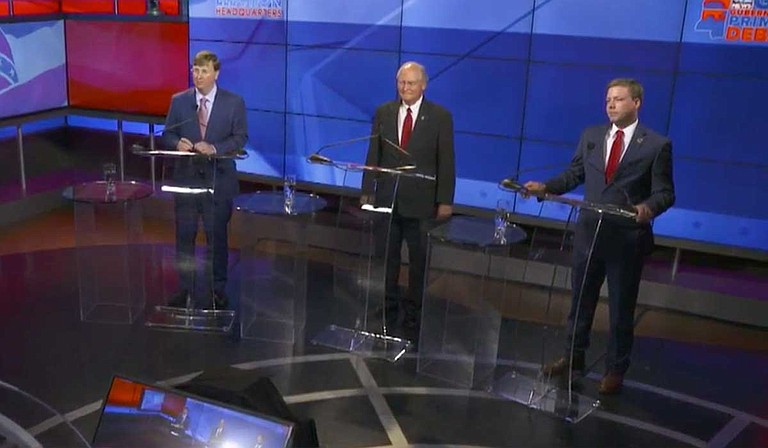 JACKSON, Miss. (AP) — Mississippi Lt. Gov. Tate Reeves said at the start of a debate Tuesday night that he has largely avoided criticizing the other two Republicans running for governor because he wants to focus on defeating Democrats.

"Our political enemy is not one another but is the liberal policy ideas of the party of Chuck Schumer and Nancy Pelosi," said Reeves, who has raised millions more dollars than any other candidate in the open race for governor.

Waller and Foster have debated each other twice before. With Reeves standing nearby in the WJTV television studio in Jackson, both men took verbal swipes at him, with Waller obliquely mentioning public money spent on a highway project near the gated community where Reeves lives and Foster saying Reeves and Democratic Attorney General Jim Hood, who's also running for governor, are part of the "swamp" in Mississippi's capital city.

Hood has raised the second largest amount of money in the governor's race. He is not debating the other seven candidates seeking the Democratic nomination.

Reeves said as governor, he will remain opposed to expanding Medicaid. Mississippi is among the 14 states that have not expanded Medicaid coverage to the working poor, which is an option under the health care law signed by then-President Barack Obama in 2010.

Waller said he wants to let people purchase Medicaid coverage, as Indiana did when the current vice president, Mike Pence, was that state's governor.

"And there is no cost to the state," Waller said. "The hospitals have agreed to underwrite it, and what the participants pay will fund the program."

Reeves responded: "I do not believe it would be no cost to the state. That's a fairytale belief."

Foster said the federal government has "ruined" the health care system but he's willing to look at options to expand Medicaid to working people who are paying taxes but can't afford health coverage.

"It's hard for somebody like lieutenant governor to understand this because he's been on the government rolls the last 16 years of his life and had everything handed to him by the taxpayers in Mississippi," Foster said.

Reeves said he will remain opposed to increasing the gasoline tax to put more money into highway construction and maintenance. Waller said a gasoline tax increase of a few cents a gallon would be fair because it's paid by people who use the roads. Foster said he would support increasing the gas tax or the sales tax if Mississippi were to eliminate its personal income tax.

If nobody wins a majority in the Aug. 6 primaries, the parties will have runoffs Aug. 27. The general election is Nov. 5.