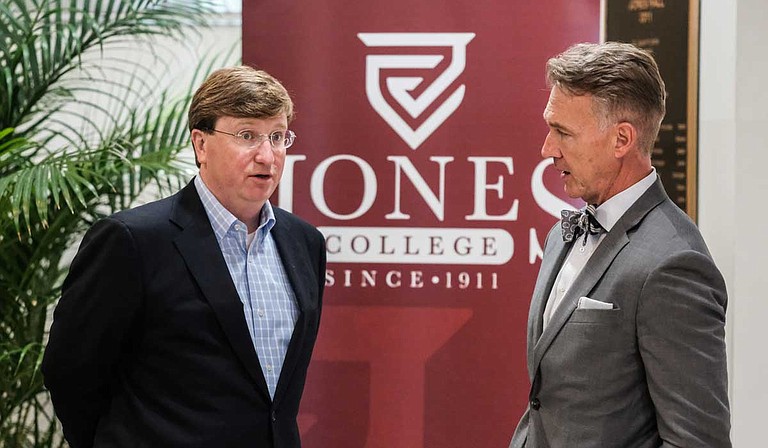 ELLISVILLE, Miss.—In front of a crowd of enthusiastic college educators, Mississippi Lt. Gov. Tate Reeves announced his plan to make Mississippi a "Ready to Work" state. It includes $75 million for career-training programs at colleges, would cap college-tuition costs for some students pursuing bachelor's degrees, and bring computer-science classes to K-12 classrooms across the state.

"We need the next generation of Mississippi workers to be equipped to take on any job," the Republican candidate for governor told the crowd at Jones College on Tuesday. "With the right training, I believe Mississippians could do that job."

The proposal would involve a $100-million state investment, including $1 million to help high-school students earn more college credits and industry credentials; $20 million "to help families get up on their feet and ready to work by dealing with many of the issues that our neighbors face today like childcare and transportation"; and $1.5 million to bring more computer science classes to K-12 schools.

Reeves' proposal would help localities across the state earn Ready to Work certification, he said. Mississippi's sister state to the east, Alabama, already has a Ready to Work program, which its community college system operates.

"We must shift our approach to today's changing landscape," he said. "We need to prepare our children for the future by exposing every Mississippi student to computer science or coding courses by graduation."

The program, he said, would help Mississippians "find a calling," and "not just a job."

The state would also use the proposed funds to help cap college tuition at $20,000 for students pursuing bachelor's degrees in "high growth" industries, he said, though he did not specify which ones.

Making sure people across the state are connected to technology and have access to the internet, the lieutenant governor said, is an important step.

When Mississippi House Speaker Philip Gunn began looking at ways to solve the lack of high-speed broadband access that plagues much of rural Mississippi last summer, he turned to utility companies to understand the problem.

In January, Gov. Phil Bryant signed the Mississippi Broadband Enabling Act, which the Senate passed under Reeves' leadership. The law's backers say it will increase broadband access in rural areas by allowing the state's 25 electric cooperatives to offer high-speed internet to their customers. Results could be years away, though, critics say.

'We've Been So Fiscally Responsible'

The state will be able to afford to make such a sizable investment as Reeves' $100 million proposal "because we've been so fiscally responsible over the past eight years," he said.

"We've made the tough decisions, and we've ensured we never spend money that we don't have. That cautious approach has enabled us to discuss bold targeted investments that can transform our economy," he said.

That includes his decision, in his role as president of the Mississippi Senate, to kill a $4,000 teacher pay raise that the House passed earlier this year, cutting it down to just $1,500. It was the first pay raise for Mississippi teachers, who are already some of the lowest paid in the country, since 2014.

Teachers would have needed a pay increase of around $3,000 to keep up with inflation since the last increase, but Reeves and other Republicans insisted the state did not have enough money to afford a larger one. Mississippi is currently facing a teacher shortage crisis, with many schools hiring unqualified educators on emergency licenses.

This month, though, the state announced that it brought in $300 million more in revenue than projected over the past fiscal year, which ended on June 30.

Attorney General Jim Hood, the top Democrat in the race for his party's nomination for governor, has blamed the lack of money in state coffers in past years on Reeves' decision to push through large tax cuts in recent years, including $260 million for out-of-state corporations.

But on Tuesday, Reeves said they had helped the Mississippi economy grow.

"It's a very similar approach to the way our president, President Donald J. Trump, went to Washington and passed significant tax reform for our people," Reeves said.

'A Necessity to Transforming Education'

In the GOP race, Mississippi House Rep. Robert Foster has been pushing for more vocational training as a centerpiece of his campaign since he announced last December. He talked to the Jackson Free Press about his ideas in an interview in January, saying he supported adding more software-coding classes in high schools.

"We've got to instill skills like that with career-tech and vo-tech. I'm for putting it even in earlier stages before high school," he said. "It's a necessity to transforming education. We've got this whole system backwards of what it ought to be. We ought not be sending everybody on a path to a four-year college because there's not but a small number of jobs out there that require a four-year professional degree. They ought to have the resources put in place to give kids these options to learn these skills so that we can break that cycle of poverty."

The other Republican candidate, Mississippi Supreme Court Chief Justice Bill Waller is focusing his campaign on roads and bridges, hundreds of which are closed and in disrepair across the state due to a lack of infrastructure funding. He wears a red "Make Mississippi Roads Great Again" baseball cap at some of his campaign stops.

Waller is also promising to raise teacher pay every year until Mississippi pay is in line with other states in the Southeast.

Voters will choose party nominees in the race for governor on Aug. 6. Anyone who registered by July 8 is eligible to vote, and voters can choose to vote in either the Democratic or Republican Party primary.

Democratic and Republican candidates in other races face off that day, too, including candidates in the races for lieutenant governor, attorney general, treasurer, State House and Senate seats, and more. If no candidate in any of those races wins 50% or more among primary voters, the top two vote-getters go head-to-head in an Aug. 27 runoff. The general election is Nov. 5.