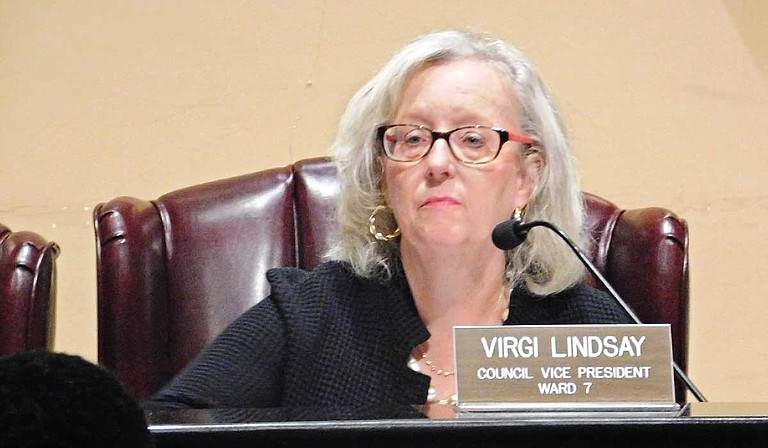 JACKSON—The Jackson City Council held elections for a new council president and vice president at the July 9 council meeting. Ward 2 Councilman Melvin Priester Jr. acknowledged the council, the mayor, the city clerk's office, his law firm, and his wife for their hard work and support during his time as council president.

Ward 5 Councilman Charles Tillman started the nominations off by throwing out Ward 7 Councilwoman Virgi Lindsay's name for the next city council president.

"Mr. President, it gives me honor to nominate a person that I know has a heart for this city, this school system, this council (and) city government," he said.

"Back in about 1991, I met a young man at Forest Hill High School. He had moved here from Atlanta, and since that time I've seen a body of work and a maturation of a young man that deserves the opportunity to be the president of the Jackson City Council," Stamps said.

Both nominees got a chance to give a brief speech on what their future plans would be if they became president. Lindsay said she has the experience, knowledge, and capabilities to unify the council and help lead Jackson forward. Banks promised to be more transparent and communicate more with the public.

After a 4-3 vote, Lindsay became the new city council president.

Nominations for vice president were next, and Ward 1 Councilman Ashby Foote nominated Stamps. Tillman and Ward 3 Councilman Kenneth Stokes, who phoned in for the meeting, supported his nomination.

"I appreciate the words of confidence (and) the support of confidence to be a vice president. I didn't come in today expecting this," Stamps said. "I will continue as always to go with the will of God, the will of the body and serve in any capacity that God and body see fit."

The council voted unanimously for Stamps to become the new vice president. Stamps is also running for public service commission this year.

The metaphoric baton was passed as Priester moved to sit beside Stamps while Lindsay took the middle seat.

Mayor Chokwe A. Lumumba took the time to commend Priester's leadership and welcome Lindsay as the new president.

"(Priester) is a diligent worker, he researches all of the issues the city faces, and I want to share what people don't see behind closed doors," Lumumba said. "And then I want to commend our new leadership. I feel that you're more than capable. I know you will be thoughtful in the decisions that you make, and I look forward to working with you guys."

Pamela Greer, Damien King's sister, said he was an active member in the community, whether it was Deer Park Christmas toy drive, giving out scholarships or using his recording studio, at 100 Grand Studios, to help young men get off the streets and find their talents.

King was murdered on Dec. 28, 2018, in the Deer Park community. WAPT reported in January that Carl Anderson turned himself into the police and was arrested and charged for the murder of King. JPD held him without bond until a court hearing. July marks the seventh month since his passing. He was a father, and a new son was born July 1, Greer said.

"Unfortunately, this baby has to come into this world and grow up without knowing that his dad was such a great guy," Greer told the council. "We're hoping that by continuing his work in our community and with the help of Councilman Stokes that we can name July 11 Damien King Day."

Greer said July 11 is King's birthday and on Sunday, the family will celebrate his 41st birthday at Poindexter Park. She became emotional while speaking, apologizing profusely for her crying.

Lumumba thanked Greer for her bravery and confidence in coming to the meeting. He said he knew King and the entire family well and wants to see what the City can do to honor his legacy.

"We thank you for not only being a voice for his life but representing the voices of people who have suffered at the hands of violence," he said.

Banks made a motion to amend the agenda to add a joint proclamation with the mayor in honor of observing July 11 in King's honor.

"Why don't we have someone write something up?" Ward 2 Councilman Melvin Priester Jr. responded. "Once we have something written up, we can bring it back, and then we can do that, so we can get everything properly documented."

The City will present a proclamation declaring July 11 Damian King Day at his birthday celebration on Sunday. It's a surprise, Greer said.

She said she wants people to remember that her brother iwas a father, a son, a brother and an uncle, and that he had a big heart.

"He lived his life helping so many people. I just want people to remember him for the gentle giant that he was," she said.

More than a dozen young men dressed in white shirts with black ties and black slacks stood in front of the city council. They were participants of Knowledge Camp University, or KCU, a basketball league and cheerleading program in Jackson that seeks to strengthen and develop young people from ages 4-14. Robert Martez Hopkins, David King and Melaine James started the program in 2015.

The camp has hosted events in the community such as Easter hunts, Mother's Day breakfasts and Halloween costume parties. Hopkins said the camp is continuing its tradition of having a book-bag giveaway this year.

Hopkins told Lumumba that he admired his father, late Mayor Chokwe Lumumba, and that he is a "direct disciple" of him.

"Love you back. You're like a brother to me. My father would be proud of you, just as I am," Mayor Chokwe A. Lumumba responded.

The City of Jackson will provide training, guidance and resources for each fellow to complete their assignments. The City will also pay $240,00 over two years in support of the program, which lasts from Aug. 1, 2019, to July 31, 2021.

'Saving the Lost at Any Cost'

Council members honored Pastor Chester L. Hicks with a resolution for being a visionary Christian leader.

Hicks grew up in Silver City, Miss., and has nine siblings. He graduated from Jackson State University with a bachelor's degree in biology. After retiring from the wastewater treatment plant, where he was a supervisor, he went onto become the pastor of Prince of Peace Word Fellowship Church in Jackson in 1985.

Recently, the church moved to a location on Cooper Road for a larger space to continue offering ministry, food, clothing, tutoring and other outreach efforts. The city clerk said the primary goal of the church is to empower inner-city youth, and that Pastor Hicks' motto is "saving the lost at any cost."

"I could not do it all without my loving, beautiful wife, my family and a superb church family," Hicks said.