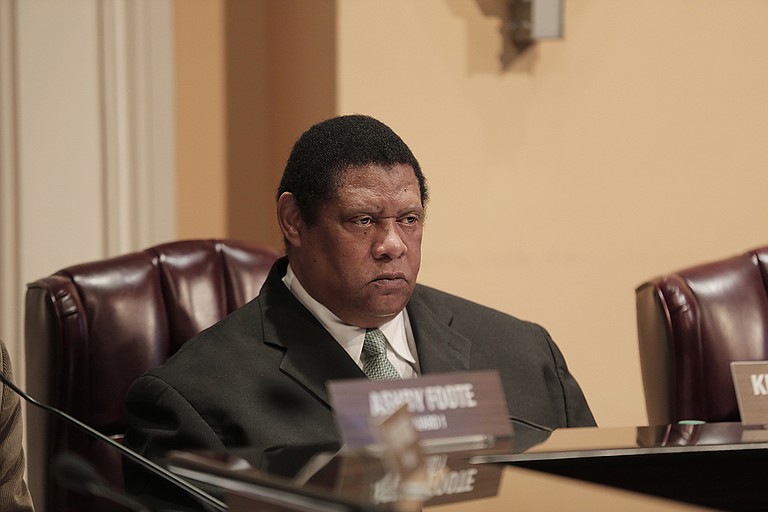 Ward 3 Councilman Kenneth Stokes agreed with west Jackson residents’ concerns on June 27 about the Jackson Resource Center, a homeless center, that could be built in the Poindexter Park community. Photo by Imani Khayyam.

Ward 3 Councilman Kenneth Stokes' grandchildren were in town recently, and they wanted to go to the park to hang out. He wanted to take them to Poindexter Park—but it was full of "dope folks," needles and defecation everywhere, he said at the June 27 Jackson City Council meeting.

Stokes said he then tried to take his grandkids to Battlefield Park, but it was just as bad there. Eventually, he took them to a park on Ridgewood Road. He said if the council had never let an opportunity center for homeless people come to the Poindexter area, then the park would be better off. He said Poindexter Park Neighborhood Association Vice President Sheila Harper had warned against it, but he had supported it.

"I tell people all the time that was the worst decision I ever made because it has almost killed Poindexter Park," he said.

Harper also opposed the Stewpot Opportunity Center on Amite Street. She recalled years ago when residents did not want the center built in their neighborhood. Two businesses pulled out of the west Jackson area because the center was being built, Harper said.

"We were promised that it would never be meant for a shelter. It was supposed to be a food pantry," she told the Jackson Free Press. "Years later, the thing that we feared the most is what has happened."

Now, the west Jackson area could be getting a new homeless center, the Jackson Resource Center, a facility that at least some residents say they do not want. Harper and other residents came to the July 27 meeting to express fear that the resource center could make things worse by "segregating" services for homeless populations, the mentally ill and those suffering with drug addiction into neighborhoods already overloaded with such facilities.

"They have a heart to help, but we're so tired of doing things, and they don't come to the neighborhood to say, 'What is it that you need?'," Harper said.

The Jackson Resource Center would be "Mississippi's first homeless all-inclusive resource center (that) will act as a central point of access for individuals and families seeking to end their homelessness. Here people get connected with supportive services and housing to restore them to self-sufficiency," its website says.

Putalamus White, founder of the Jackson Resource Center, said they are not trying to bring more homeless people into the community, but want to help the ones who are already there.

Christie Burnett, director of the  opportunity center, said she finds Stokes' statement funny. She said the opportunity center opened in response to the city not having a place for people to go when it was really hot or really cold.

"The opportunity center isn't the problem. The lack of resources and the mismanagement of where to put those things, that's the problem," she said.

Burnett said she recognizes that homeless people are sleeping in the park, which has some drug-trafficking activity. But she pointed to a lack of medical resources for the homeless community.

"We do the best that we can to try to provide as many resources for both the homeless and the community," she said. "I'm so open with meeting with people and figuring out how can we help make this work better (and) how can we work together."