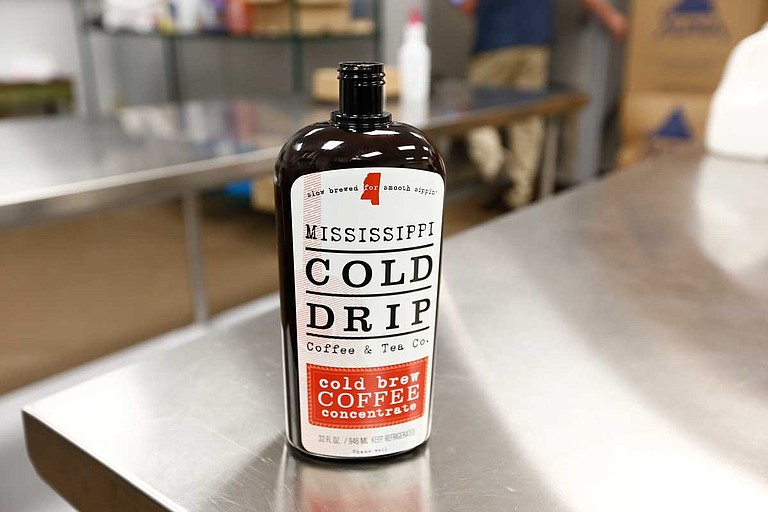 Mississippi Cold Drip Coffee & Tea Co. has been steadily expanding since Raymond Horn started the business in 2013. Now, the business has expanded its space and is working on adding more products to its offerings. Photo by Imani Khayyam.

In a space at The Hatch in midtown, four large pots sit on a high shelf, each marked with a different coffee concentrate, like mocha or Chai tea. They look like giant stockpots, and there's a reason for that. As Jon Peterson, a partner at Mississippi Cold Drip Coffee & Tea Co., explains, they're actually crawfish cooker tanks, and at the moment, each contains ground coffee beans in a cheese cloth filter, soaking in triple-reverse-osmosis water.

They take the roasted and ground beans, and then put them in a cheese-cloth-like filter and let them brew in the tanks for 24 hours. For the Chai tea, they use cardamom, clove, ginger, allspice, black pepper, orange oil and cinnamon. "It's just a waiting game once you get the water in there," Peterson says.

After the waiting period, they drain the concentrate (meaning a coffee that has a high beans-to-water ratio), add flavors if necessary and then bottle the product.

Raymond Horn began Mississippi Cold Drip in 2013 as a cottage-food business, which allowed him to make the coffee at home. Peterson first encountered Horn in spring 2014. Peterson was a student in Millsaps College's ELSEWorks Entrepreneurship Program, which gives students hands-on experience with entrepreneurship. Peterson was one of the first undergraduates to get involved with the program, and for his project, he chose to work with Horn.

As the business was expanding, Peterson helped Horn in getting a space at The Hatch ready for opening. They hosted the company's grand opening in May 2015. Peterson graduated from Millsaps that year with a bachelor's degree in business administration with a focus on entrepreneurship. He then focused on completing his master's degree in business administration between 2015 and 2016, though he was still involved with Mississippi Cold Drip.

"I still wanted to do this," Peterson says. "I had some other things going on, and so I didn't really want a full-time job, and it just made sense."

But after Peterson's graduation in 2016, Horn approached him about being a partner in the company. Peterson had always wanted to be an entrepreneur, so he said yes.

That was three years ago, and the company has been steadily expanding. At first, they were just in local stores such as Kroger, McDade's Markets, Coffee Prose, Shoe Bird Cafe at Belhaven University, and Mac's Fresh Market and Mama Nature's Juice Bar in Ridgeland. But as of June 29, 2018, Horn and Peterson made the first Cold Drip delivery to the Poplar and Germantown locations of Whole Foods Markets in Memphis.

"We had really great success," Peterson says. I (would do) a weekend of demos, which was on a Friday, Saturday and Sunday, and I would honestly do a demo anywhere from eight to 10 hours a day. ... We (have sold around) $2,000 worth of product in one weekend."

Because of that success, the two have also hired some students from Millsaps for part-time work.

As of June 2019, the business also has a bigger space in The Hatch. Chef Nick Wallace uses Cold Drip's old space, and Cold Drip has taken up an 1,160-square-feet space toward the back of the facility.

Being in The Hatch has allowed the company to connect with the midtown community, Peterson says, citing examples such as Meals on Wheels, where The Hatch owner Midtown Partners feeds some of the elderly residents on Monday, Wednesday and Friday.

"That gives us as a as a tenant in midtown ... a chance to interact with some of the locals and stuff," he says.

"And so now we get to talk about, you know, sports or something, or we just talk about news. It just really gives us a chance to mingle and interact with people that we might not have otherwise crossed paths (with). It's just really cool to see people of all walks of life come together in this little neighborhood where everybody's trying to work together and just revitalize it and make it something extremely nice."

Mississippi Cold Drip even has its own roaster in the facility, Peterson says. For about a year and a half, Doug Elzroth has been roasting beans for his business, Northshore Specialty Coffee, at the Cold Drip facility.

Mississippi Cold Drip is also working on rolling out new products, include hazelnut, pumpkin spice and king cake coffee concentrates. They're also looking at brewing a dark-roast coffee, which Peterson says has a stronger flavor but less caffeine than lighter roasts. They are also working on a decaffeinated version.

On supporting local, he says: "It's important to support and shop local because those are your fellow citizens in your surrounding area. We're not a large corporation, and so all of our taxes will stay right here in Mississippi, and we genuinely care about each of our customers. If something is wrong, we try to go out of our way to make it right."

Cold-brew coffee: most commonly uses the "immersion method," where the brewer places coffee grounds in room temperature or cold water and lets it brew for 12 to 24 hours. It has a mellower flavor and less acid content than hot coffee.