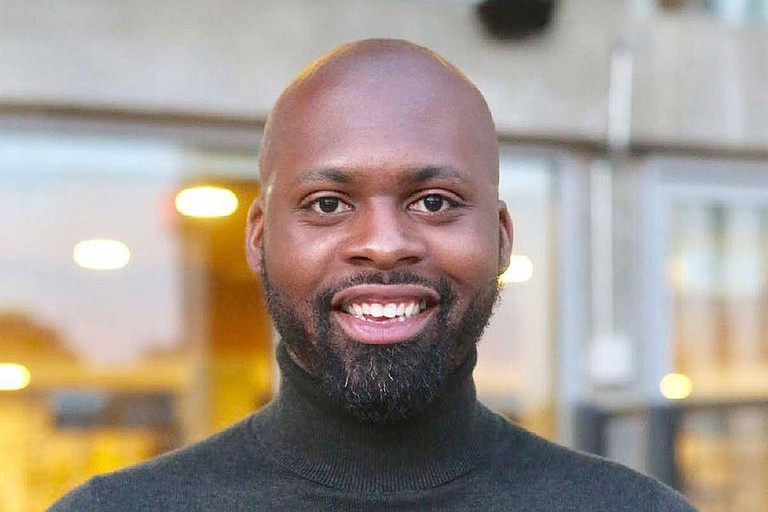 Community activist, motivational speaker and author Duvalier Malone spoke at Tougaloo College on Wednesday, Feb. 13, as part of its "Real Talk" spring semester series. The Tougaloo chapter of the NAACP hosted the event.

Malone organized the "We Demand Justice Rally for Emmett Till" rally at the state capitol in Jackson in February 2017 after Carolyn Bryant Donham, the woman who accused Emmett Till of whistling at her, admitted to lying. Her husband, Roy Bryant, and J.W. Milam later kidnapped and brutally murdered Till on Aug. 28, 1955. Photos of Till's body from the open casket funeral his mother, Mamie Till-Mobley, held for him galvanized the Civil Rights Movement in the 1960s.

After the 2017 rally, Malone began traveling the country to help raise awareness of the importance of Till's civil rights case. His appearance at Tougaloo is part of his "Those Who Give a Damn" tour, named for a book Malone wrote and published in 2018 about the Emmett Till case titled "Those Who Give a Damn: A Manual for Making a Difference."

In the book, Malone also talks about living in poverty with his single mother during his childhood, an essay contest that sparked his interest in political activism at age 16, and his efforts to combat racism and promote LGBT rights in Mississippi.

"The topic of my Real Talk presentation at Tougaloo was 'Taking a Bold Step,'" Malone told the Jackson Free Press. "I spoke to the students about Mamie Till-Mobley's bold step in showing the world what happened to her son at his funeral, and the importance of speaking up, speaking out and using our community circles to make a difference.

"When we see something unjust in our communities, it is our obligation to speak out against it. In Mississippi, it is especially important to tell these stories during Black History Month. The struggles of Emmett Till and his mother are deeply rooted in Mississippi's history, and we need to encourage our young people to make noise for change. We all want to see good in our world and our society."

The next events in Malone's "Those Who Give a Damn" tour will take place at Alcorn University in March, and Busboys and Poets Books in Washington, D.C., in April. For more information, visit duvaliermalone.com or follow him on Facebook.

The University of Southern Mississippi School of Music will host the final concert of the International Percussion Festival on Saturday, Feb. 16, at 8 p.m. at The Thirsty Hippo in Hattiesburg. The concert will feature performances from guest artists Oscar Albrieu Roca and Javier Nandayapa, as well as the Southern Miss Percussion Ensemble.

Roca is a professor of percussion at the Buenos Aires Conservatoire and percussion director of the National Program in Argentina. He has taught and performed in the United States, Spain, England and Germany.

Nandayapa began his musical career as a member of the Marimba Nandayapa ensemble in 1989. His father, Zeferino Nandayapa, founded the ensemble in 1956. Nandayapa has performed as a soloist with orchestras such as Orkiestra Kameralna PROGRESS in Poland, the Lithuanian State chamber orchestra and the National Symphony Orchestra in Washington, D.C.

Tonight, Feb. 15, Nandayapa will host a lecture and master class at 7:30 p.m. in the PAC Percussion Room at USM. The event is free and open to the public.

Admission for the International Percussion Festival concert is $15 for the general public and $5 for students with an ID. All proceeds will go to the USM Percussion Studio. For more information, visit usm.edu.

Delta State University's Department of Social Work will host its 14th annual Margaret Tullos Field Symposium on Feb. 22 in the Jacob Conference Center in Ewing Hall on the Delta State campus. The event is open to social workers and students interested in entering the social work field.

The university launched the field symposium in 2005 and named it in honor of Tullos, professor emeritus of social work at Delta State, in 2009. Tullos taught at Delta State from 1989 to 2008 and was the director of field education in social work.

Kathryn Conley Wehrmann, president of the National Association of Social Workers, will deliver the keynote address for the symposium. Wehrmann directs the social work program at Illinois State University and received NASW's lifetime achievement award at the district level.