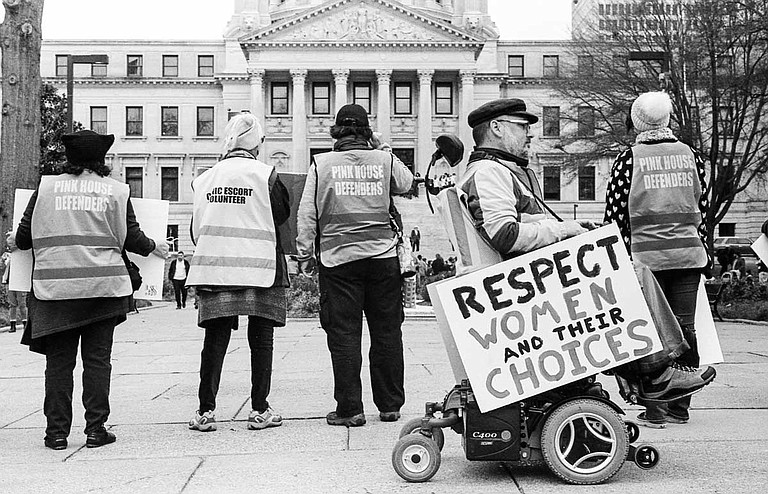 JACKSON — Abortion-rights activists are warning that Mississippi's fetal-heartbeat bills, and others like them, are part of an effort to instigate a U.S. Supreme Court case that could overturn constitutional protections for reproductive rights.

On Tuesday, state senators advanced Senate Bill 2116 out of committee. If it becomes law, it would "prohibit an abortion of an unborn human individual with a detectable fetal heartbeat except when a medical emergency necessitates."

The American Pregnancy Association says fetal heartbeats may be detectable as early as at six weeks gestation.

Planned Parenthood Southeast Director Felicia Brown Williams tweeted Tuesday that the bill "would essentially act as a de facto ban on abortion. Many, if not most, people don't know they are pregnant at 6 weeks."

State representatives advanced House Bill 732 on the same day, which would also prohibit abortions after a heartbeat is detected and subject any physician who performed an abortion after detection to license revocation.

"The Mississippi Legislature knows this is unconstitutional, and simply does not care," Brown Williams wrote in a follow-up tweet. "This is an insult to Mississippians and to this country."

'Again and Again, It's Been Found Unconstitutional'

Last year, lawmakers passed a law banning abortion after 15 weeks, even though Mississippi's only abortion clinic does not perform abortions after 14 weeks. A federal judge struck that bill down.

"Again and again, we've been told that we should pass legislation, and again and again, it's been found unconstitutional," Sen. David Blount, D-Jackson, complained to committee members during debate on the fetal heartbeat bill.

Laurie Bertram Roberts is a Jacksonian who describes herself as a "reproductive justice activist.” She is the director and co-founder of the Mississippi Reproductive Freedom Fund—the only abortion fund in the state. She thinks getting abortion laws in front of the courts is part of the point, she told the Jackson Free Press on Wednesday.

"These six-week bans have always been an attempt to push a direct challenge to Roe," she said, referring to Roe v. Wade, the 1973 U.S. Supreme Court ruling that upheld abortion as a right.

"They are automatically unconstitutional under current precedent, right? Now, the difference is that, whereas people were hesitant before to support it because they knew it was going to be unconstitutional, right now, with (Justice Brett) Kavanaugh on the Supreme Court, they think they have a shot."

President Trump appointed Kavanaugh to the Supreme Court last fall, after former Justice Anthony Kennedy retired. In 1992, Kennedy's vote in Planned Parenthood v. Casey was key to stopping the Court from overturning Roe v. Wade. In an ideologically divided nine-member court, he was often known as the swing-vote in 5-4 cases.

In his confirmation hearings, though, Kavanaugh called Roe "settled law." Democrats in the U.S. Senate challenged the notion that it meant Roe would be safe with him if abortion comes before the Supreme Court.

"Chief Justice (John) Roberts said the same thing in 2005," Democratic U.S. Sen. Dianne Feinstein said at the time. "Then he voted in favor of a law that would have forced 75 percent of Texas clinics to close. Fool me once, shame on you. Fool me twice, shame on me."

She was referring to Justice Clarence Thomas' 2016 dissent when the four liberals on the court, joined by Kennedy, struck down a law that would have left the state with few abortion clinics standing.

Other states, including Iowa, have also passed or are considering fetal heartbeat bans. A judge struck the Iowa law down last month.

"It's an all-out, nationwide assault on reproductive rights and reproductive justice," Bertram Roberts said. "People keep looking at these things as individual states' attacks. No, these are nationwide, coordinated attacks on Roe."

Mississippi Gov. Phil Bryant has repeatedly signed anti-abortion legislation that courts repeatedly struck down. In 2011, he helped lead the campaign for the Personhood Amendment, a draconian ballot initiative that would have severely limited abortion even in cases of rape or incest and could have made in-vitro fertilization and some forms of contraception illegal. Mississippi voters defeated it.

"It's time to pass a Heart Beat Bill in Mississippi and stop this madness about when life begins," Bryant tweeted on Jan. 31.

Lt. Gov. Tate Reeves, a Republican candidate for governor in 2019, also urged support for the bill, tweeting in favor of "ending the barbaric practice of ending life in the womb even though a heartbeat is plainly detected."

"I'm committed to making Mississippi the safest place in the US for an unborn child," Reeves added.

Note: An earlier version of this story failed to identify Laurie Bertram Roberts as the executive director and co-founder of the Mississippi Reproductive Freedom Fund. We apologize for the error.