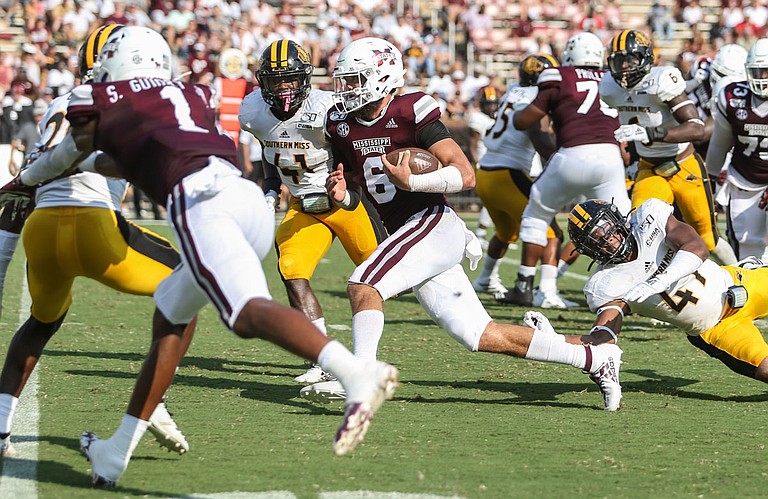 Garrett Shrader suffers injury, leading him to step down at quarterback for Mississippi State University in the Music City Bowl. MSU graduate Tommy Stevens will start in his place.

By THE ASSOCIATED PRESS

Moorehead said Thursday after practice that Shrader is doubtful for Monday's game against Louisville (7-5). Moorhead had announced late last week that Shrader would start the game, which would have been the freshman's fifth career start. Asked Thursday what prompted the switch, Moorhead said it was Shrader's injury.

“We're experts at it this year,” Moorhead said of making another quarterback change. “So we've done it a time or two. We've played the shuffle. But yeah, I mean Tommy's an experienced guy. When he's been healthy, he's performed very well.”

Asked if Mississippi State (6-6) would hold any one out of the bowl due to suspensions or academic issues, Moorehead said no one would be out because of grades with everyone eligible.

Shrader played in 10 games and leads Mississippi State averaging 175.7 yards of total offense per game. He threw eight touchdown passes and ran for six more. Stevens ranks second averaging 155.5 yards per game, and he has thrown nine TDs while scoring on three runs.

Stevens started eight games this season as a graduate transfer. Moorhead said Keytaon Thompson will be the backup. Moorhead said Shrader is expected to join the Bulldogs in the next couple of days.