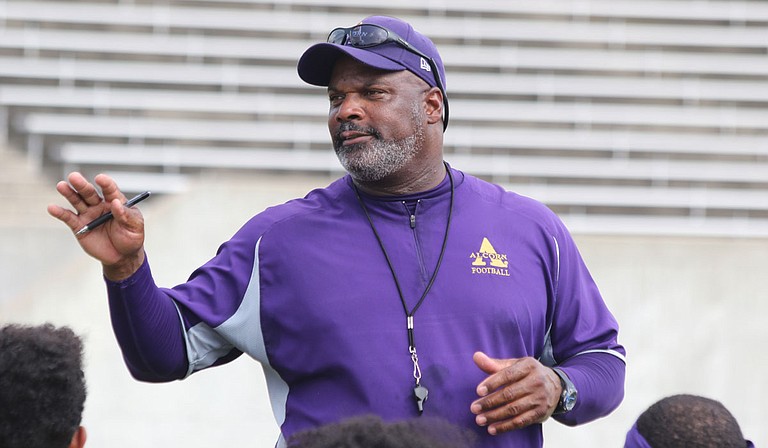 McNair leads the Braves to a 8-3 overall record and 6-1 record in SWAC play and a sixth straight East title this year. Courtesy Alcorn Athletics.

Lorman, Miss., is home to one of the most dominant current active streaks in college football. Alcorn State University might not get the press that Ohio State University, Clemson University or the University of Alabama gets, but similarly to those teams, the Tigers control their conference.

ASU has not missed a beat since naming Fred McNair head coach in February 2016. He took over a program that had won two straight East Division and SWAC Football Champions under Jay Hopson. McNair joined the program in 2013 as the quarterbacks coach before taking over the head coaching job.

McNair and the Braves enjoyed a breakout season in 2018. Alcorn State finished with a 9-4 overall record and a 6-1 conference mark for a fifth straight East title.

After dispatching Southern University in the SWAC Championship Game in a 37-28 win, McNair finally won his first SWAC title. Alcorn State fell to the University of North Carolina A&T in the Celebration Bowl by two points in a 22-24 loss.

This season, the Braves stormed through the SWAC once again. McNair led his squad to a 8-3 overall record and 6-1 record in SWAC play and an amazing sixth straight East title. This Saturday, Dec. 7, the Braves face Southern in the championship game for the second year in a row.

One could argue this was the best coaching job McNair has done since taking over the Alcorn State program. In the third game of the year, SWAC Preseason Offensive Player of the Year quarterback Noah Johnson went down with an injury.

McNair was named SWAC Coach of the Year for the second time after earning the honor for the 2018 season and now for the 2019 season. He is the first back-to-back winner of the award since Mario Casem in 1973 and 1974.

McNair will try to lead the Braves to a second consecutive Celebration Bowl appearance if his team can defeat Southern. The 2019 SWAC Championship game kicks off at 3 p.m. on Saturday, Dec. 7, with ESPNU broadcasting the game.