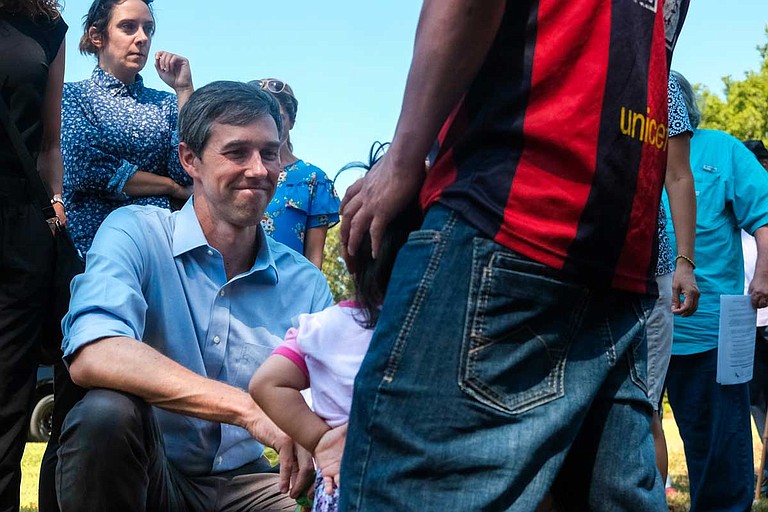 At a stop in Canton, Miss., Democratic presidential candidate Beto O'Rourke speaks with a little girl whose mother was taken in an ICE raid in town the week before. Her father, who has two other children, said ICE is still holding his wife at a facility two hours away. Photo by Ashton Pittman

CANTON, MIss.—Democratic presidential candidate Beto O'Rourke knelt down on a patch of grass in a Latino neighborhood in Canton, Miss. A 2-year-old girl dressed in pink looked at O'Rourke while her father stood next to her, his palm resting atop her messy black pigtails.

The girl's father, speaking in Spanish, told O'Rourke this morning that he had two other children as well—and that their mother, an undocumented immigrant from Guatemala, had been been captured by federal immigration agents in at a poultry plant in town just one week and two days earlier.

"We're visiting this kind of terror on families who have done nothing wrong, who pose no threat. We've got to make it better. We've got to change this," said O'Rourke, a former congressman from El Paso, Texas. He said people in Canton told him they do not know how to make rent, pay for a lawyer for the family members—whether a wife, husband, grandparent—that ICE had detained.

At poultry plants across Mississippi on Aug. 7, U.S. Immigration and Customs Enforcement, or ICE, carried out the largest series of one-day, one-state worksite immigration raids in history. U.S. Attorney Mike Hurst, who coordinated the raids, announced that day that the agency had captured nearly 700 people they suspected were undocumented immigrants. 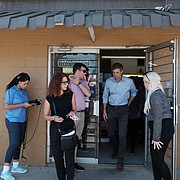 Beto O'Rourke, a Democratic candidate for president, exits Tienda Anita, a Latino grocery store in Canton, Miss. He traveled there on Aug. 16, 2019, to meet with immigrants affected by recent ICE raids in the town and across the state. Photo by Ashton Pittman

The day after the raids, Hurst announced that 300 of those immigrants had been released for "humanitarian" reasons—typically because they had small children with no other parent to care for them. The Guatemalan man with the little girl told O'Rourke that ICE is holding his wife in a facility somewhere two hours away. His other children, he later told Associated Press reporter Emily Wagster Pettus, are ages 4 and 11.

'We're visiting This Kind of Terror on Families'

The Jackson Free Press asked O'Rourke why he thought the Trump administration would choose to carry out such a large-scale raid in Mississippi, which has one of the smallest immigrant populations in the country.

"Everyone I see, I keep asking, 'Why did they pick you? Why did they pick up this community?'," O'Rourke said. "And everybody throws their hands up and says, 'None of us have committed crimes, all of us are working the toughest jobs.' Person after person said, 'My husband works the day shift. He comes home. I work the night shift, so that each of us can be with the kids. We can't afford child care for our kids, and we're not citizens so we're afraid to go out for any other purpose.'"

Among the undocumented immigrants he had met, though, Beto said, their children were all U.S. citizens. He said he thinks the Trump administration targeted Mississippi to create fear.

"I don't know (why), other than to strike terror into the heart of this community, and if that were the goal—and I think it is under Donald Trump (because) we're seeing a 10-fold increase in these kinds of ICE raids in his administration versus the last administration—if that is his goal, he is getting it done," O'Rourke said.

Beto said he was there "making sure we can share with the rest of the country what is being done in our name. We're visiting this kind of terror on families who have done nothing wrong, who pose no threat. We've got to make it better. We've got to change this."

Reeves: 'MS Doesn't Give In to Threats'

Lt. Gov. Tate Reeves, who is facing Bill Waller Jr. in the Aug. 27 runoff for the Republican nomination for governor, tweeted today that "Beto O'Rourke is campaigning in Mississippi today," but did not mention the ICE raids that drew the Texan here from El Paso. Instead, Reeves focused on his opposition to any kind of gun regulations.

How to Help Children, Families After Mississippi ICE Raids

A growing collection of many ways to help and donate in the wake of the Mississippi ICE raids.

The Democratic presidential candidate's visit came, Reeves tweeted, "hours after proclaiming that as President he would force our people to hand over certain guns" in a "mandatory buyback." He added, "Insane. As governor, I will not back down to the left's demands. They will find out MS doesn't give in to threats."

From El Paso to Mississippi: 'An Attack on Hispanics'

The presidential candidate said the U.S. must change immigration laws so that they reflect American values. "They're working so hard to raise their U.S. citizen children," he said of the targeted families. "Just remember that we're doing this to family members of our fellow citizens. And that means legalized people who are legal here."

Better laws would include a number of elements, Beto said. "That means freeing Dreamers from any fear of deportation. That means ensuring that there is a legal, safe and quick path to come here and work in this country, especially to do jobs that in some cases we are unable to do otherwise. And that means treating people with dignity and respect. So many of those mothers in there said that they feel like there is an attack on Hispanics."

Beto also addressed the terrorism that recently rocked his hometown when a white man drove nine hours to a Walmart there intentionally to shoot immigrants, as he wrote in a manifesto before the attack. "There was literally a massacre of 22 people because of fears of an Hispanic invasion that this president has been warning about and ginning up, talking about infestations and animals and predators and killers," Beto said.

"I haven't yet met a killer in this community. These are decent hard-working people who are contributing to our success. So let's change our laws to reflect that."

Beto was in El Paso in the aftermath of the Walmart tragedy when he heard about the Mississippi raids.

The candidate came to Mississippi to the site of one of the ICE raids rather than to a state considered more in play for a Democrat in 2020 because he is inspired to ensure the story of the racism against Hispanic immigrants is fully told.

"If we do not tell that full story, if we're not here to report this and share it with our fellow Americans, these kinds of attacks and this kind of devastation, this kind of terrified look that we're seeing from kids and adults alike, that's going to continue in this country," he said.