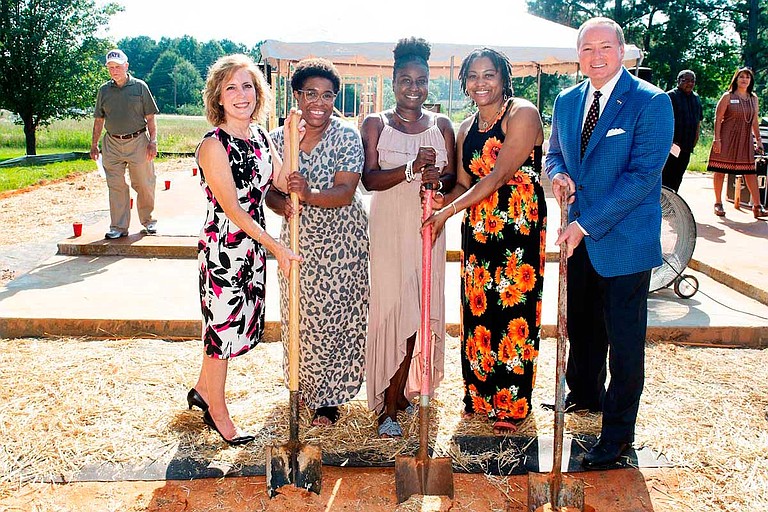 Mississippi State University and the Starkville Area Habitat for Humanity broke ground on Tuesday, Aug. 13, for the 11th home MSU and Habitat have partnered to build as part of the university's Maroon Edition program. MSU President Mark E. Keenum drove in the ceremonial first nail and presented Habitat with a $5,000 check from the university.

The Maroon Edition program has both a reading and a service-learning component for participating students. The Maroon Edition First-Year Reading Experience encourages students to read a particular book. The book for the 2019 program is "Hold On with a Bulldog Grip: A Short Study of Ulysses S. Grant," which MSU and Ulysses S. Grant Presidential Library historians John Marszalek, David Nolen and Louie Gallo wrote together with former Rhode Island Supreme Court Chief Justice Frank Williams.

For the service-learning component of the program, students can volunteer to work shifts on Habitat homes near the campus during each fall semester. MSU's Office of the Provost launched the Habitat partnership in 2009, and students have joined with other volunteers to build new homes for 11 Habitat partner families since.

The first build day for the current Maroon Edition house was Wednesday, Aug. 14. The house is on Azalea Lane in Starkville. Keyana Triplett, a Louisville native who has lived in Starkville since 2008, will join students and other volunteers from Habitat to work on the construction.

For more information on the Maroon Edition Program, visit maroonedition.msstate.edu. For information on Starkville Area Habitat for Humanity, visit starkvillehabitat.com.

The $67 million facility includes 656 residential beds, 46,000 square feet of retail space, and a 7,000-square-foot addition to the MSU Child Development and Family Studies Center, a release from the university says. Greystar has a 40-year lease with MSU for the land, and is financing, building and managing the development.

The College View development takes its name from the street it is on, which is close to downtown Starkville and the Cotton District community. The building has one-, two- and four-bedroom housing units for students and an outdoor entertainment area for concerts, festivals and other events.

College View runs on a microgrid energy system, which means the building's electrical grid can operate even during storms or power outages with power from generators, batteries or solar panels, the release says.

The program was part of the university's Flagship Constellations initiative, which is a collaboration between UM and the University of Mississippi Medical Center that launched in November 2017. As part of the Flagship initiative, faculty, staff and students from both UM and UMMC work together to research topics such as brain wellness, community well-being, and the effects of injury, addiction and disease on brain function, as well as prevention of and recovery from brain impairment, a release from UM says.