U.S. Attorney in Mississippi to 'Aliens,' Employers: 'We're Coming After You' 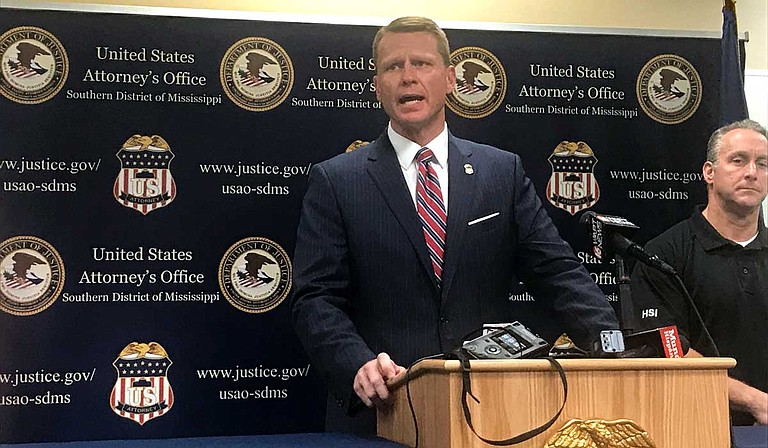 Homeland Security Investigations is a division of U.S. Immigration and Customs Enforcement, or ICE.

"While we are a nation of immigrants, more than that we are first and foremost, a nation of laws. The rule of law is the bedrock, the very foundation of our great country. Without law, there is no order. Without the enforcement of law, there is no justice," said Hurst, whom Donald Trump nominated to the post in 2017.

Hurst said while the United States does welcome people from other countries, they have to follow the laws and abide by the rules and come here legally, or they should not come here at all. He said the same goes for employers.

"For those who take advantage of illegal aliens, to those who use illegal aliens for competitive advantage or to make a quick buck, we have something to say to you. If we find that you have violated federal criminal law, we're coming after you," Hurst said.

Bill Chandler of the Mississippi Immigrant Rights Alliance told Ashton Pittman of the Jackson Free Press today that's Hurst's use of the word "alien" is a racist slur.

“When you use the term ‘illegal alien,’ that is no different than using the n-word,” he said.

It is phrase often used by anti-immigrant and xenophobic conservatives instead of the more accurate, and less offensive phrase "undocumented immigrant."

Because this is an ongoing investigation, Hurst could not give away any specifics on the operation.

"HSI's worksite enforcement efforts are equally focused on aliens who unlawfully seek work in the U.S. as well as the employers who knowingly hire them," HSI New Orleans Special Agent Charge Miles said in a statement Hurst's office sent out today.

"We in the US attorney's office, HSI and our other federal partners will continue to do our job to investigate and to prosecute those who choose to violate our federal criminal laws in order to make our citizens safer and our country more secure," Hurst told press.

Acting Director of the United States Immigration and Customs Enforcement Matthew Albence said the arrests today were the result of a year-long criminal investigation, and the arrests are another step in that investigation.

"These individuals who are detained are being processed and based upon that process, their criminal history and their status, we will determine at a later day who we can prosecute or criminalize," Hurst said.

President Donald Trump in no way influenced these arrests, Hurst said today. These investigations stem from evidence and a federal judge that has found probable clause to execute search warrants.

"We have HSI and ICE agents that are rearing to do this, as well as federal prosecutors who are happy to prosecute these kinds of cases," he said.

Mayor Chokwe A. Lumumba released a statement in response to ICE's recent arrests: "The City of Jackson is firmly committed to promoting and securing safe communities. We unflinchingly uphold the canon of human rights for human beings. The ICE raids are both dehumanizing and ineffective as a tactic for protecting citizens from potential harm. These raids will only further alienate communities from law enforcement, disrupt community policing efforts, and cause law enforcement to forfeit credibility and trust among the people they are sworn to protect and serve. I'm calling upon faith institutions in our community to become sanctuaries for our immigrant neighbors and protect them from potential harm. The City of Jackson strongly objects to the Trump administration's ICE raids."

ICE spokesman Bryan Cox said any reports of ICE checkpoints or roadblocks is false and irresponsible because it spreads fear in the community.

He said if citizens would like to see if their loved ones are being detained and processed, they can call ICE's toll-free detainee locator hotline at 1-888-351-4024. Operators are bilingual. They may also visit the website ice.gov, which has an online detainee locator.