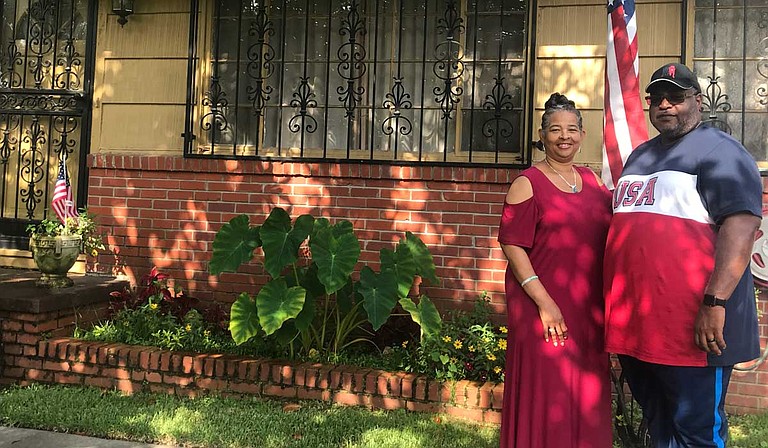 When Isaac Norwood was a child, he remembers, the High School Park community was one where neighbors tended to each other. He said children in the neighborhood played at everyone's house, and they went inside for food and drink.

"Everybody had a basketball goal in their backyard. We had a wealth of activities that we did with each other. It was a different time," Norwood told the Jackson Free Press.

He idolized Lynnwood Robinson, his next-door neighbor who got up every morning with a plan. "Growing up next to a man like that, you have to have ideas in your mind. I didn't think it was important, but I learned as a child how to work as a young man," he said.

The house Norwood grew up in was the third built on Westchester Drive in 1958. He grew up there until he left for college at 17. His parents then moved to a house off Forest Avenue, while some in-laws lived in his childhood home. In 1991, he moved back into his childhood house, where he raised his children and still lives there today.

"I still had neighbors that were there when I was a child. They could help steer my kids in the right direction like they did me. We stayed because of the community," he said.

Norwood said he has noticed a change in the last 10 years. People have started to move out of the neighborhood, there have been a few incidents of burglary and violence against elders and some of the property is dilapidated. Despite this, he said, the neighborhood is still family-oriented and remains a tight-knit community.

"I got elderly neighbors that call on me every week, and I would tend to what they needed. They took care of me when I was a child," Norwood said. "Many occasions I'd help change beddings and fix air conditioners. I'd get vermin out of their houses."

Raising his children in his childhood home gives him a sense of pride because they get to follow the same path that he did, he said. "They can walk around that neighborhood and tell them who they are. People know me, and they know I still live there," Norwood said.

'All The Pretty Parts'

Wade Corner, a white man, developed the High School Park community, and Bilbo McHuley, a black contractor, handled the majority of the construction. It started in the 1950s with the upgrading and building of new homes on Parkway Avenue and soon enough, houses started to develop on Main Street, Westchester Drive and Albemarle Road.

At the time, the prices of homes ranged from $12,500 to $16,500. Over the years, many increased in value due to add-ons such as yard improvements, upstairs, dens, fireplaces and altered fronts. At its inception, mostly school teachers, business owners, state employers, college professors and contractors lived in the area. "It used to be a beautiful neighborhood," resident Joyce Jackson told the Jackson Free Press.

She took the publication on a neighborhood tour on July 23, showing the good, the bad and the ugly facets of the community. "We not gone show all the pretty parts. We gone show the rundown parts," she said.

Like various other streets and communities in Jackson, the community suffers from potholes, abandoned houses and blight. A recent influx of violence in the community includes home invasions and assaults against the elderly.

During the tour, Jackson pointed out the lack of care to the Pete Brown Golf Course on Walter Dutch Welch Drive, which is named for the first African American to win a PGA event. Jackson said the golf course is the City of Jackson's responsibility. The grass is overgrown and weeds are sprouting up in ditches to the point that it's hard to see the course.

"They named the golf course after him, and they're half keeping it up. Unless I raise hell, they won't hardly cut it," she said. "I've been fighting this city forever and a day."

High School Park Garden and Home Improvement Association President Melanie Norwood told the Jackson Free Press that Ridgeway Street bothers her because children have to walk through trash to go to school.

"Because of the train not being redirected and the Walter Dutch Welch street being closed, people are throwing out trash. These are individuals that may not live in our neighborhood, and our children have to walk back and forth in it, and they can't get on the sidewalk," Norwood said.

Melanie Norwood said the association has had talks with the Housing Authority about renovating the Golden Key Community Center and adding community gardens. For now, the neighborhood does a spring cleanup to get people interested in maintaining their yards and have collaborated with the Delhaven community, which is adjacent to them, she said.

"Just working with them, just drawing us all together helps build us and make us stronger. We have to look out for one another," Norwood said.

While the High School Park community searches for help and solutions, a nonprofit organization based in New York is helping neighborhoods build themselves back up.   Cities of Service is doing revitalization work in neighborhoods through their Love Your Block program, which gives city governments the opportunity to better engage citizens on the problems they are experiencing in their neighborhood.

Becker said the program would allow a city to pilot a new initiative in city hall, but it is not long-term. "We want to feed it and see it kick things off, demonstrate the value of it and let the city take it over," she said.

The grants focus on low-income neighborhoods, and the group places AmeriCorps VISTA members in city governments to help facilitate the program. Last year, the organization awarded $25,000 grants to 10 cities. The program lasts two years and the mini grants can be used to fund physical projects like cleanups, lot reactivations, community gardens or home repair, she said.

Huntington, W.Va., is one of the cities participating in the Love Your Block program. Breanna Shell, planning director of the City of Huntington, told the Jackson Free Press that the grant is focused on the West Huntington community, which the city has been looking at for years. "We already had some momentum and wanted to show this could be a pilot project with the hope we could expand it to other neighborhoods," she said.

Shell said the neighborhood decides what they want to fix or spend the money on and has a selection process for spending the mini-grants and implementing them for the next three to six months. She said because there is an aging housing stock, the city did a lot of demolitions and had a lot of vacant lots.

One of the projects they funded was the transformation of a lot into a pocket park, which came about from a partnership with the Children's Home Society, she said. "They set up fruit trees, a couple of paths and a bench, a free library and a blessing box with free food for people to make it more engaging. Before, it was an overgrown lot with weeds and trash," Shell said.

Other projects included the repainting of some street signs and two mini home-repair projects that included replacing gutters, fixing stairs and pressure washing. "We're a city that's really trying to be innovative and think outside the box. We know we have struggles, but we really are trying our best to make our city better," Shell said.

She said neighborhood revitalization is important because it makes sure those who have the least options to change their living environment have the best quality of life, especially those in low-income neighborhoods.

"If we can make someone's neighborhood safer to live in or closer to a park or a more tight-knit community, that's the thing that can make them healthier and happier," Shell said.