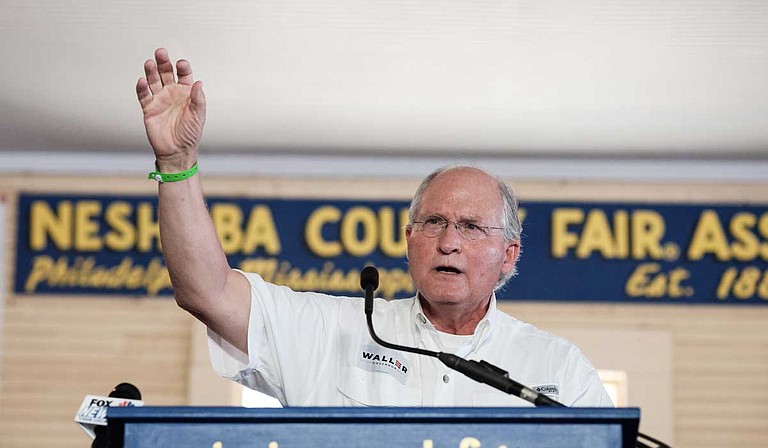 Republican candidate for Mississippi governor Bill Waller, the former chief justice of the Mississippi Supreme Court, told a crowd at the Neshoba County Fair on Thursday that he supports expanding Medicaid in the state, though he prefers to call it “Medicaid reform.” Photo by Ashton Pittman

Only Lt. Gov. Tate Reeves, the frontrunner for governor, remains opposed to accepting billions in federal dollars that could provide health care to around 300,000 more Mississippians.

“Some say health care is doing fine. The facts are, we have 31 rural hospitals on the verge of closing,” one of Reeves’ opponents, former Mississippi Supreme Court Chief Justice Bill Waller, told fairgoers. “This is where we are. This is the decision point.”

When Obama signed the Affordable Care Act into law in 2010, it included a provision requiring states to expand Medicaid. The federal government would pay 100% of the cost of state expansions for the first several years, then 90% in later years. Expanded Medicaid is supposed to cover people who make too much for traditional Medicaid but not enough for subsidies to help pay for private insurance under the ACA.

After a 2012 U.S. Supreme Court decision nixed the requirement, though, Republican governors like current Mississippi Gov. Phil Bryant rejected the funds and refused the expansion.

Since the governor first rejected the expansion in 2013, not only has it blocked around 300,000 working Mississippians from coverage options, but it has helped facilitate the closure of five rural hospitals in the state. Dozens more are struggling to keep their doors open as uninsured people who fall into the insurance gap come in to the emergency room for care because they cannot afford to go to a clinic.

‘Do Something Pragmatic’ or ‘Lose Some Hospitals’

At the fair, Waller said he is a conservative, and because of that, he believes that people who want to work should be able to do so without having to give up health care if they make too much to qualify for traditional Medicaid.

“I think we should incentivize people to work. I was told yesterday about a young man who works every day. He needs a diabetes pump. He can’t get any kind of insurance,” Waller said. “Well, folks, this is the people we would bring in on Medicaid reform. Those that are trying to work. You know, we get that young man a pump, he may be a full-time employee in a year. Isn’t that what life’s all about? Don’t we need to give people a step up?”

Waller, like other Republicans who support Medicaid expansion, prefers to call it “Medicaid reform.” He supports "Mississippi Cares," a Medicaid expansion plan the Mississippi Hospital Association unveiled in June. It would accept federal ACA dollars to expand Medicaid and could help keep the state’s rural hospitals afloat. Patients and hospitals would cover the remaining 10% of the cost of expansion, with patients making policy payments, deductibles and copays. Hospitals would underwrite the rest. It would not cost the state a dime, Waller said.

“Who here thinks Mike Pence is a liberal? Anybody? Mike Pence pioneered this in Indiana,” Waller said, alluding to Reeves’ criticisms that expansion is a “liberal” and even “socialist” plan.

Waller said he had spoken to the director of the local Neshoba General Hospital, who told him he needed to hire more people and give current staff a pay raise but did not have the funds to do so due, in part, to the state’s decision not to expand Medicaid.

“We either step up and do something pragmatic, or we’re going to lose some hospitals, and that’s a fact,” Waller said.

Earlier that morning, Mississippi House Rep. Robert Foster, another Republican candidate, also made the case for Medicaid expansion before the crowd. He did not specifically endorse the MHA plan but said he would look at “all options.” He took a shot at Reeves.

“One of my opponents likes to get up and say that he’s against Obamacare expansion in Mississippi,” Foster said. “Well, here’s the facts: He’s been in charge of the (Mississippi) Senate for eight years. And under his leadership, Mississippi has one of the highest percentages of people in the U.S. on Obamacare.”

Foster was referring to Mississippians who get subsidies for private insurance through the ACA federal marketplace on healthcare.gov.

“The ACA is the law of the land, and while I don’t like it more than anyone else, … we have to do what is in the best interests of the people of Mississippi.” Foster said. “And the people that are hurting right now are the working class—the people who pay taxes—and the only option right now is to go to the emergency room because they can’t afford to pay for private insurance and their house note.”

‘I Will Fight it Every Single Day’

Reeves spoke last, reiterating his opposition to expanding Medicaid. Throughout the campaign, he has said that the way to insure more Mississippians is by giving them better jobs and more opportunities so they can afford private insurance on their own.

Reeves did not explain why he believes it is a bad policy but said he rejects Waller’s assertion that it would not cost anything.

The top candidate in the Democratic race for governor, current Attorney General Jim Hood, was the first 2019 candidate to call for Medicaid expansion. He did so on the day he announced his campaign in his hometown of Houston last fall. That town’s only rural emergency room closed a few years ago under financial pressure.

In the race for lieutenant governor, both the Republican frontrunner, Delbert Hosemann, and the sole Democratic candidate, Jay Hughes, called for Medicaid expansion in speeches on Wednesday.

Democratic and Republican candidates in other races face off that day, too, including candidates in the races for lieutenant governor, attorney general, treasurer, Mississippi House and Senate seats, and more. Those races could also go to a runoff on Aug. 27. After voters decide, nominees from both parties will face off in the general election on Nov. 5.

Mississippians must register at least a month before an election in order to be eligible to vote and must show an accepted form of photo ID at the voting booth, a list of which is available on the Secretary of State website. County Circuit Clerks across the state offer all residents free photo IDs that they can use to vote.