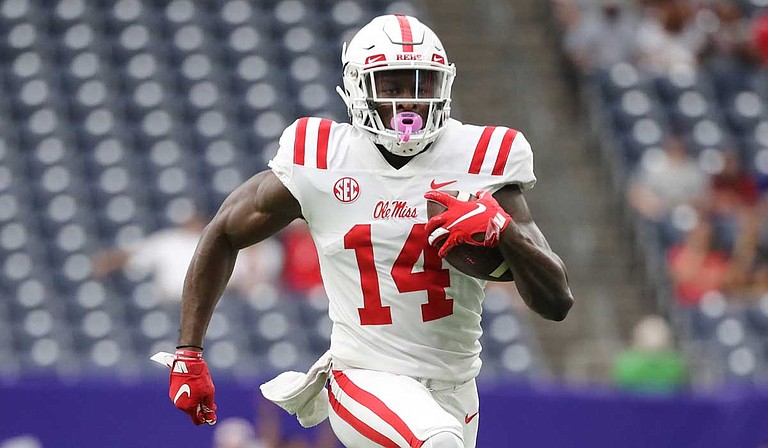 Dreams will start to become reality when the 2019 NFL Draft kicks off on Thursday, April 25, in Nashville. The NFL released the names of the 23 players the league invited to attend the draft and await to hear their name called during the early rounds.

Former University of Mississippi wide receiver D.K. Metcalf is one of the players who will be at the draft waiting to learn where his football career takes him next. It has to be a relief for him, considering how his season ended last year.

The wide receiver started seven games of the 2018 season before seeing his campaign end with a neck injury against the University of Arkansas. Before the injury he snagged 26 catches for 569 yards and five touchdowns. Phil Steele, Lindy's and Athlon named him Preseason All-SEC.

A rare combination of size and speed at the wide receiver spot makes Metcalf an interesting prospect to NFL teams. His neck injury happened to be minor, and he was able to take part in the NFL Combine to showcase his skills.

The Oxford, Miss., native enjoys the bloodlines that the league likes to see. His father, Terrance Metcalf, played for the Rebels before the NFL, and his grandfather Terry Metcalf and uncle Eric Metcalf both spent time in the league.

D.K. Metcalf enjoyed his best season as a redshirt freshman in 2017. He played in all 12 games while catching 39 passes for 646 yards and seven touchdowns. His play earned him SEC All-Freshman honors and a co-Freshman of the Week award from the conference.

The 2016 season ended early for Metcalf, as he suffered a broken foot that stopped his development after just two games. He caught two passes for 13 yards, but both catches went for scores.

He ends his college career with 67 receptions for 1,228 yards and 14 touchdowns. Those are impressive numbers considering he played in only 19 games. Metcalf averaged 18.3 yards per catch and 20-plus yards per catch in eight games. In his final two seasons, he caught seven passes that flew more than 50 yards.

A consensus four-star recruit out of Oxford High School, several schools sought after Metcalf. He was a U.S. Army and MaxPreps All-American selection as the fifth best player in Mississippi by Rivals.com. Rivals considered the receiver the 14th-best pass catcher; Scout.com had him at no. 18; and 247Sports.com had him at no. 19.

He leaves school as a redshirt sophomore, and his lack of playing time, raw skills and injury history might scare off some teams; however, depending on how his medical report turned out at the Combine, his high ceiling will entice more than a few NFL general managers to take a chance on a wide receiver who could become a starter early next season.

At the event, he ran a 4.33 in the 40-yard dash. The rest of his numbers were solid, if not impressive, for the scouts and others on hand. Even with is raw skills, he should make an impact early next season for the team that selects him if he can stay healthy. If his health doesn't derail his career, he should develop into a top receiver in the NFL.