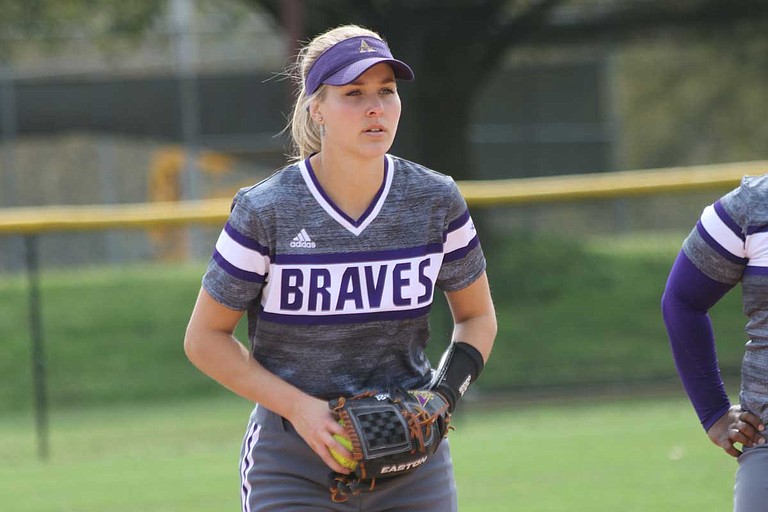 The Alcorn State University softball team accumulated an eight-game winning streak before finally losing in a midweek double-header against the University of Memphis on Tuesday, April 2. Pitcher Paige Taylor led Alcorn State to five of those consecutive eight victories. She began her string of strong performances with a 12-9 victory over Grambling State University on Saturday, March 23, in which she pitched 4.2 innings and struck out four batters.

The Port Coquitlam, British Columbia, native followed up the Grambling State win with her best pitching outing of the season. Against Rust University on Tuesday, March 26, Taylor pitched five innings and struck out a season-high 10 batters in a 17-0 win.

Taylor continued to dominate foes as the Braves hosted SWAC rival Mississippi Valley State University for a three-game series over this past weekend. The pitcher went 3.2 innings in game one. Alcorn State scored in the bottom of the seventh after blowing a 5-0 lead. The Braves won 7-6.

In the first game of a double-header on Saturday against MVSU, Taylor posted a season-high seven innings pitched in a 4-0 shutout of the Delta Devils. In the series finale, She pitched 3.1 innings with two strikeouts in a 4-3 win for the Braves.

During her five-game winning streak, she pitched 23.2 innings with 18 strikeouts while giving up five earned runs and allowing just 13 hits. Taylor earned SWAC Pitcher of the Week honors for her efforts against Rust and Mississippi Valley State. It is the second time she has earned SWAC weekly honors since the conference named her Pitcher of the Week in February after her pitching sweep of Kentucky State University.

Against Memphis on Tuesday, Taylor look the loss in game one and pitched in game two, but the team used her lightly in both. The Tigers jumped out to big leads in both games as they cruised to two easy victories.

Before playing for Alcorn State, Taylor pitched two seasons at Marshalltown Community College in Iowa. She appeared in 40 games, posting an 18-12 record and 22 complete games. She held the single-season school record for innings pitched and wins with her 168 strikeouts being the second most in school history.

Taylor finished last season as 2018 SWAC Newcomer of the Year. She appeared in 16 games, made 13 starts and had five complete games. She pitched 56.2 innings and struck out 27 batters while leading the team in the earned run average statistic. Her first weekly SWAC honor came in March when the conference named her SWAC Pitcher of the Week.

Taylor and Alcorn State look to begin a new winning streak next week when the Braves host arch-rival Jackson State University. Game one is Friday, April 12, with a double-header on April 13. Currently, Alcorn State sits in second place in the SWAC East with a 6-3 record and just a game behind Alabama State University.

Alcorn State will look to improve on its 10-16 record against the Tigers before traveling to Miles College for a double-header on April 17. The Braves stay on the road for a showdown against Alabama State in a three-game series that could decide the east title from April 19-20.