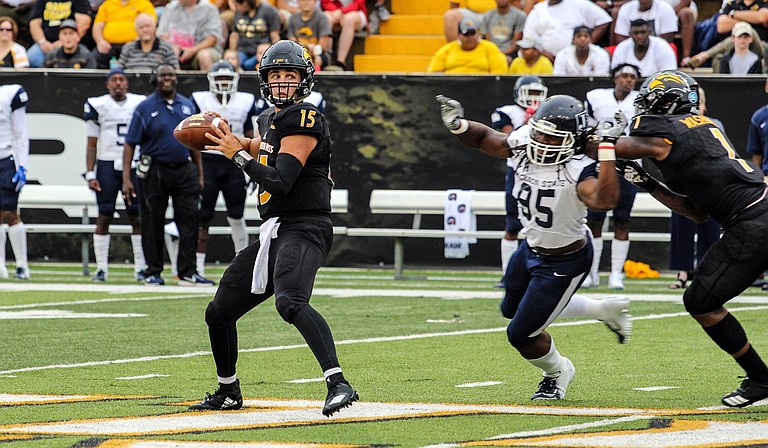 Kwadra Griggs began the preseason as the projected starting quarterback for the University of Southern Mississippi; however, the team suspended him before the season for a “student conduct matter,” the Hattiesburg American reported in August.

The program lifted his suspension on Sept. 14, but he has yet to see action this season.

That means USM had to turn to redshirt sophomore quarterback Jack Abraham to become a new starting quarterback. Before his college career, Abraham played at Oxford High School, where he threw for 12,021 yards with 130 touchdowns and 28 interceptions. He is the first player in that school’s history to throw for 10,000-plus yards and 100-plus touchdowns.

He helped lead Oxford High to three-straight 5A state title games, though the team never clenched a title. In his senior year in 2015, he threw for 5,091 yards and 57 touchdowns with just six interceptions. He was named the 2015 Mississippi Gatorade Player of the Year, USA Today High School Sports Mississippi Offensive Player of the Year and a Dandy Dozen athlete.

Abraham originally committed to Tulane University, but he reopened his recruitment and instead decided to sign with Louisiana Tech University. He redshirted his freshman season in 2016 after a minor surgical procedure to repair his knee.

Abraham made an impressive first start for the Golden Eagles against Jackson State University on Sept. 1. He threw four touchdowns, three of which went to wide receiver Quez Watkins, before making an exit early in the third quarter. He completed the game with 21 of 27 completed passes for 242 yards in a 55-7 win.

Turnovers plagued Abraham in his second start. He threw two interceptions and lost two fumbles against the University of Louisiana at Monroe on Saturday, Sept. 8. He completed 31 of 46 passes for 378 yards and two touchdowns, but his four turnovers made the difference in USM’s 20-21 loss to the Warhawks.

With Hurricane Florence bearing down on the Carolinas, Southern Miss didn’t get to play North Carolina-based Appalachian State University on Sept. 15, and the game will not be rescheduled this season.

Abraham showed out when the Golden Eagles finally got to hit the field again against Rice University on Sept. 22. He completed 25 of 34 passes for 428 yards with four touchdowns and one interception in a 40-22 victory.

Abraham’s yardage in that game was the sixth time that a Golden Eagles quarterback has surpassed the 400-yard mark. He joins Nick Mullens, who accomplished the feat three times, and Austin Davis and Jeff Kelly.

In three games this season, Abraham has completed 77 of 107 passes for 1,048 yards with 10 touchdowns and three interceptions. He has a 72-percent pass completion rates, and he is averaging 9.79 yards per attempt.

Though Griggs is cleared to return, Abraham has done well enough in three games to earn his place as the starter. Abraham is not much a threat to Griggs’ run, as the former Oxford High star is more of a pocket passer, though.

It is going to take another nearly flawless game from Abraham if USM hopes to take down Auburn University in the team’s first road contest this week. The No. 10-ranked Tigers host the Golden Eagles this Saturday, Sept. 29, with kickoff at 3 p.m. and coverage on the SEC Network.