Trump to Campaign with Hyde-Smith in North Mississippi 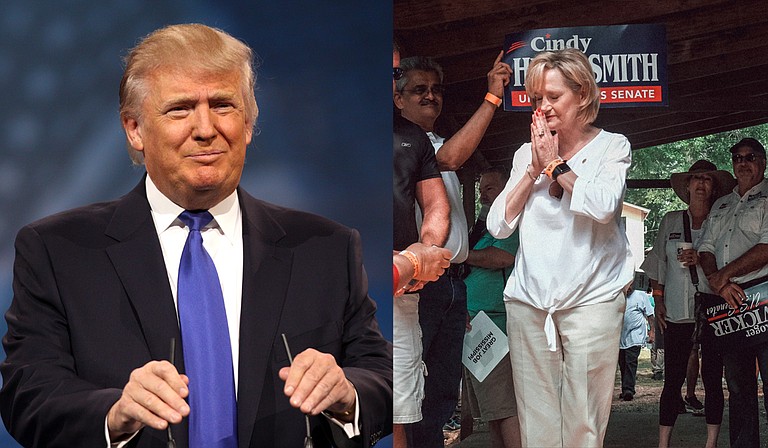 JACKSON—The Cindy Hyde-Smith for U.S. Senate campaign announced on Tuesday that President Donald Trump will join her for a rally in north Mississippi on Oct. 2. The campaigns cancelled a Sept. 14 rally as Hurricane Florence approached the Carolina coast just days before.

Trump’s earlier rally with the incumbent Republican senator was set to be held in Jackson; instead, the campaign plans to hold the rescheduled event in DeSoto County at the Landers Center in Southaven, Miss., at 7 p.m.

“President Trump will update Mississippi patriots on the great success of his America First agenda that’s improving the lives of families across the Magnolia State,” Michael Glassner, chief operating officer of Donald J. Trump for President Inc., said in a press release. “The President will also encourage Mississippians to get out and vote for Cindy-Hyde-Smith in November.”

“I am honored that the president was able to reschedule his visit to Mississippi to show his support for our state and to campaign on my behalf,” Hyde-Smith said in a press release. “It has been a privilege to back his ‘America First’ agenda, and I look forward to welcoming him to DeSoto County.”

McDaniel Not Pleased With Trump’s Endorsement

After staying neutral for months, Trump endorsed Hyde-Smith on Aug. 23, even as the two GOP campaigns vied for the support of their party's president. McDaniel accused the party establishment of "pressuring" Trump into supporting Hyde-Smith and pointed to Trump's endorsement of him in 2014, when he unsuccessfully challenged Cochran for the seat in a party primary.

In a Facebook post shortly after the original rally's announcement, McDaniel urged supporters to welcome the president.

"When he arrives, let's thank him for his service," McDaniel wrote at the time. "And then, let's remind him about the real MAGA candidate and conservative in the race for U.S. Senate. We can't MAGA if the establishment gets to make dirty back room deals and hand picks the next senator from Mississippi! Drain the swamp!"

Trump's appearance could provide a boost for Hyde-Smith after internal polls from her campaign and Espy's campaign last month found her functionally tied with or trailing the Democrat, with McDaniel bringing up a distant rear.

The visit comes as Trump fights to save his U.S. Supreme Court pick, Brett Kavanaugh, who faces accusations of sexual misconduct from multiple women. On Tuesday, Sept. 25, Trump called the women’s allegations a “con game” by the Democrats and dismissed claims by one accuser, Deborah Ramirez, on the basis that “she admits that she was drunk” when the alleged incident took place; Ramirez claims a college-age Kavanaugh stuck his penis in her face at a party. The Senate Judiciary Committee will hear from Kavanaugh’s first accuser, Christine Blasey Ford, and Kavanaugh himself on Thursday.

In a statement released to the press Monday, Hyde-Smith said “sexual assault of any kind is unacceptable,” but concurred with Trump’s assertion that the Democrats manufactured the allegations, adding that “it is becoming very apparent that a major partisan effort is underway to undermine not just Judge Kavanaugh’s nomination, but his character.”

McDaniel criticized Hyde-Smith for not doing more to stand up for Kavanaugh in a tweet on Monday.

“The Left’s strategy to falsely accuse, silence, censor, and destroy anyone they don’t like must be stopped and @cindyhydesmith, as a representative of the people of Mississippi, should be out front leading the charge for Judge Kavanaugh’s confirmation,” McDaniel wrote. “Her silence is deafening.”

Tickets for the rally are free and available to those who register on the official Trump campaign website.

Nate Silver at FiveThirtyEight is citing data indicating that Hyde-Smith is the most reliable pro-Trump vote in the U.S. Senate, with a 100-percent pro-Trump record five months in.